Posted on December 11, 2012 by Slavka Sverakova 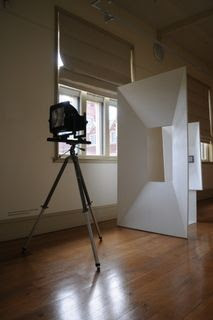 On entry, a large, strange looking assemblage insisted on primacy and intimacy of viewing: Corrective Perspective (2012) allowed one viewer at the time, to puzzle about the small image in its depth,  a still, a last image from a film I do not know. Without that connection I depended on the visual – and sensed dominant nostalgic accent. Moreover, from outside, the sheer bulk of the object exuded a domineering force over the space, almost miming some surveillance.  This dual trajectory between intimacy and surveillance will be observable in all exhibits, albeit in different disguises.

The light bleaches the physical dimensions with a ruthlesness of failing memory, caressing the fragments to become the convincing punctum (Barthes). Amongst the fertile sources for the thirteen exhibits in the long corridor- like space, Richards included reading Jean Jacques Rousseau’s The Social Contract, re-constituting a still from a film, re-making An Oak Tree (minus a semiotic argument) this time with real sapling, and gift of a tree and gifts of time, of presence, of reading.

John Casey names J J Rousseau as the founder of the Romantic view of culture as a “soul of the state and of every individual.” European culture has developed an immensely strong genre of autobiographical narrative, its roots traceable to Socrates (gnothi seauton – to know oneself), and to St Augustine’s Confessions. The latter concept of belief as emerging from personal experience is analogous  to Richards’ exploration of family, parents, gifts from friends, travel, collaboration with others, where the other may be a colleague or a work of art (e.g. film). This analogy has been validated by Richards’s performance during the opening of the exhibition(see below).

The wall opposite the row of the windows, carried the six large prints of Reference Reading (2012), pin hole camera exposures. Richards invited Christa-Maria Lerm Hayes to select a number of different text and read them in front of the camera. The duration of reading determined the exposure time. Taped reading was pinned to each panel as a soundtrack, I suppose, as an offer to “measure” the differences in the length of time embedded in each image. The duality of this element clearly exists as a necessary condition for the image to be how it is, and as unnecessary for visual aesthetic experience. Another duality consisted of the absence of acuity of detail and a strength of hues to fill that vacuum, both undeniably working towards a portrait. Moreover, the details that appeared just in enough definition wield substantial power of characterisation. Its unifying intensity effortlessly diminished any disunity. 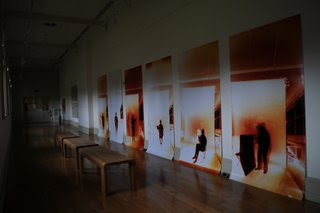 The oak sapling  placed by Richards with soil in a glass on a glass shelve, was a gift from Helen Sharp’s cottage in Inisherk. Its tidy instalment on the wall slightly above the eye level, initiated associations with adoration. Adoration of nature, not of a belief like in its earlier incarnation in An Oak Tree(1974) by Michael Craig-Martin(b.1941). In another version, the oak tree is printed on its own, in a series of four prints.

Peter Richards: Cause of Context, one of four, 2012

Removed from the soil the trees need to protect the roots exposed to the air, yet they have nothing to protect them with. The vulnerability of the roots of a family is made visible. By extension, in association with Rousseau, replacing the family  by references, the society by knowledge,  makes them vulnerable to decline.

The tenor of this exhibition is the necessity of change,  inevitability of change, and the uncertainty of the outcome. Most visibly, it has manifested the binding and unexpected results in the Reference Reading.   The chance of the segment of time(duration of reading) produces an unintended image in an agreed composition, reminiscent of  the metaphor of the blind watchmaker.

We may use each image as a dowsing rod, that points to truths so shy that they cannot be nailed down.Take them as a surprise, or leave them alone. The exhibition presented a kind of sensibility, a take on the world, developed around the hope for reconciliation of dualities, differences. It is neither gloomy, nor simply sunny. The little tree in the glass sums it up: there is a great difference between still believing something and again believing it.

In his performance, Richards watched the windows of the gallery from outside, while the viewers could watch him standing at the end of the lawn in front of the building.  Leaning on a closed umbrella, in a dark suit, he stood still. Next to him the intoxicating superb drumming evoke not only sensual pleasure, but also a triumphant youthful confidence. Inherited from our ancestors, drums of messengers come to mind, traditional sound as a call to come together.  The performance connected with popular culture, autonomous art on the edge with  an efficient but redundant communication tool.  Drums are, of course, bona fide musical instruments of  youth culture. The noisy energetic dynamic play filled the space in all directions seducing the mood to dance.  The  still gaze  embalmed in silence  carved a mute corridor between the dark figure and the gallery.  Privileged, sight and hearing were palpably claiming unity, akin to TS Elliot’s wish that we “hold philosophical and anthropological view of nature and culture in our mind at the same time”. Perhaps, Richards had in mind  the threat of  a contemporary versions of A. Pope’s Dullness. I cherish that possibility. You know the verse:”thus at her felt approach, and secret might/Art after art goes out, and all is night.

Peter Richards with Sean Kaluarachchi, 105 minutes live work to be viewed from the gallery on the opening night

Cause of context, 2012, on Fuji Duratran mounted on diabond with gloss archival laminate, 90x90cm ,unique.

writer on art
View all posts by Slavka Sverakova →
This entry was posted in article, review. Bookmark the permalink.