Posted on February 4, 2013 by Slavka Sverakova

Ninety works on paper  and a video are comfortably and beautifully displayed in the three rooms of the  gallery at the Crescent Arts Centre. The white walls inhaled the diffused daylight to soften the contrasts with charcoal and graphite in five suites of paper rectangles to whom Kelly entrusted her thoughts. Thoughts as memory, as imagination, as narratives, as observation.

Most exhibits were shown at the Down Arts Centre, Downpatrick, in Autumn 2012 (28 September – 27 October). The core idea, mentioned in the exhibition title, is liminality.

Coined in 1903 by the anthropologist Arnold van Gennep, it received claims to be a universal sequence across and in between thresholds. It is that state of uncertainty when it turns into a malleable condition  for creation, change, creativity. It has been first applied to the rituals, later, in 1967 Victor Turner (in The Forest of Symbols) extended in to foregrounding of an act, and to the tying together of experience and a thought. The latter is easily applicable to art, to the state between two levels of consciousness,  intention and the slippery getting there. The questions like “is it finished? ” are a part of the van Gennep’s  three-fold structure of liminality: separation, tabula rasa, resolution.

Sharon Kelly chose to connect the experience of running with  imagination to draw fragments of the components of the way she negotiates the liminal space.  The video in the last gallery is made of alternative layers of breathing, running feet sounds, and images of the pathway, trees, grass she runs along. They were apparently “monitored” by a video camera attached to her upper arm while running.  All signify the passage of space and time, so much so, that the rhythmical sound of trainers on the tarmac reminded me of a metronome when playing on a piano. Running as a metronome for filming drawing is, however,  not an appropriate  comparative analogy. Running is a kind of ritual, it may change the status of an individual, nevertheless, in this case it does not. Running connects the outside of the body, space and time, with the inside, thresholds and stamina. Kelly has remarked that “…energy, passion, stamina…” were phenomena shared by both running and drawing.

Liminality of a runner is more defined, it may be programmed, measured, controlled. Liminality of drawing is of such intensity that it not only removes previous drawings from  consciousness, it threatens to destabilise an image while it is about to become one out of traces.

The video contains a beautiful example: Visible is Kelly’s hand holding the graphite to make vertical marks of different density.  They coalesce into an upright arm in a long finger-less black glove women favoured for ball dancing. As the black marks reveal a body and legs of a runner, what seem to be a limb is without a doubt a torso. The  first threshold (arm) was annihilated not only by additions, but also by change in the scale. The destructive phase  for one, became productively positive for another meaning. Liminal space is thus not to be lived in, but to pass through. Drawing in Kelly’s art practice is about living, dying, caring for family, observing, making. Some think of drawing as drawn objects, others as an act. Richard Serra stated “…in terms of drawing, ideas, metaphors, emotions, language structures result from the act of doing.”

The sheets of the same size, displayed in the first gallery share an interesting origin. Trace reproduced above was originally vertically positioned. Kelly turned it on its side, after she cut  a large composition “that did not work” into fragments of the same size. Liminality indeed is sacred, alluring and dangerous.

Some of the “heads” in the second gallery were drawn from sideways observation of herself in the mirror. However, the pull of the imaginative drawing, that harvests the previous knowing of forms and techniques, stayed irresistible.

Blue lips is such a head that abandoned the likeness in favour of the universal female head, in the manner of the Plato’s Demiurg in Timaeus: putting together cut sameness with cut difference. 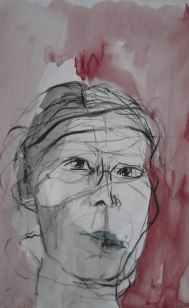 Sharon Kelly delivers powerful art, nuanced in tone, passionate in commitment and honest in dedication. This is an exhibition to treasure in memory.