Her gestures as drawings in the air are readily understood. In the above frame  it appears as if she is  responding  to someone in the audience. In reality,  the artist stays silent/mute throughout the performance except when she pronounces the word Performa.  Esther Ferrer  animated her seated figure by gestures of pointing, stressing, underlying,  confirming, questioning etc. All familiar and internationally recognizable codes. Her “drawing in the air” was not only understood but remembered and more or less silently responded to by her attentive audience.  Indeed, explaining a direction to somebody, we habitually “draw” in the air, as we often accompany talk by hand movements.Animation in silence appears as strategic strength in the absence of verbal communication. The popularity and attraction of silent films confirms the aesthetic force of mute poetry.

I have included Ferrer here, because the following relates also to both performance and  drawing. 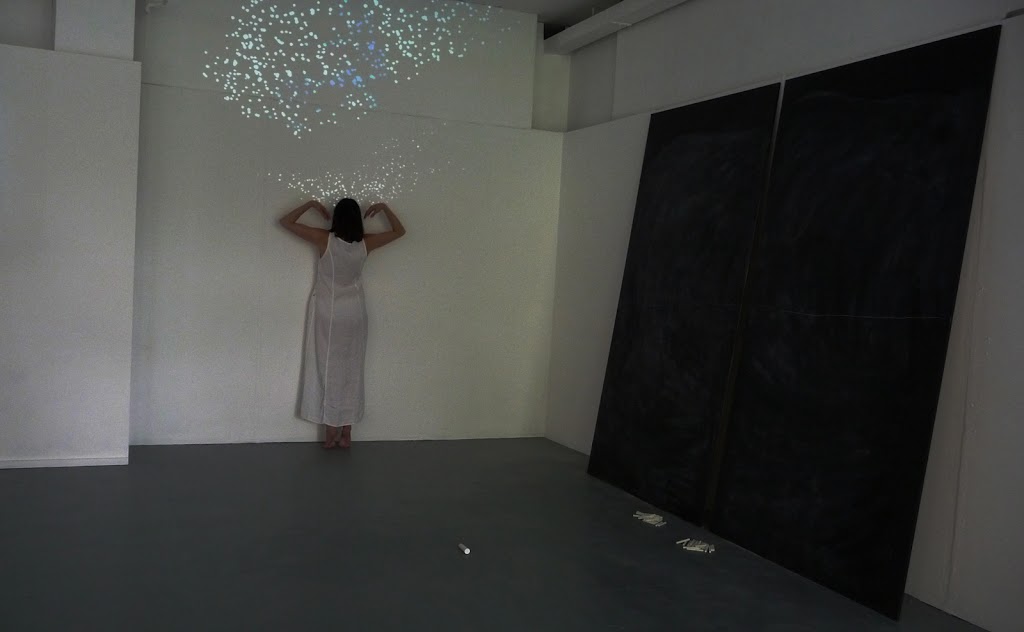 Karine Talec: Drawing in the Light, 2013

Karen Talec  presented   drawings, a ladder with two top steps replaced by strip lights,  a projection of a swarm of starlings in front of appearing and disappearing Blue Planet Earth… and a performance, which I have not seen.

It is the projected animation I focus on.

The projected animation  was placed higher on the wall,  in a place which older art dedicated to  images in fresco, stucco or mosaics.

The flickering  birds, white on the darker wall,  associated with the mosaic’s responsiveness to light, except that they were the light. The technique posited light both outside and inside the lens based digitally reworked images. The projected image  was  powerful, truthful, memorable,  economical and beautiful. Talec chose a title that  includes the term ‘drawing in the light’.

Not with the light as Martina Corry does. Not even  as any  drawing on a ground is habitually made, when we can see the mark, thus  in the light.

Raising my curiosity how Talec  thinks about this ancient venerable and utterly adaptable mode of making marks I asked.  She has e-mailed her thorough answer, here in italics:

Just a few words about my work at this stage… Maybe I shouldn’t call the digital images ‘drawings’. Some of the processes are totally different, like layering, playing with brightness and contrast, applying effects to the images or changing them to their negatives (which I did to the birds so they wouldn’t be black on white but white on black, meaning they would be made of light when projected, while the background would simply disappear as the projector cannot project black). There are similarities though between drawing with conventional tools and materials and drawing with a graphics tablet, a digital pen, brush, eraser, etc… For example you move the mouse to affect the image on the screen, to create a shape or delete one. I think there are definitely elements of drawing in this work, but not only. It is a combination of digital processes and hands-on ‘drawing’ techniques through the media of digital tools. There is a direct link between the eyes, the brain and the gesture of the hand. The materiality of the drawing is absent, or rather it is a very different materiality, a digital one, with its own limitations, rules and also possibilities. It is these possibilities that interest me, in particular the possibility of making these ‘drawings’ into light.

In comparison with Ferrer, Talec does not use communicative gestures for her ephemeral ‘drawing’, which is  recorded and can be projected over and over, its ephemerality defeated. This built- in capacity of instant renewal of numerous exact repeats, depends on technology as much as the methodology used. It also connects to Nietzsche’s doctrine of eternal returns. Compared to Corry who uses light as a tool, as a material,  Talec starts with a film,  lens based technology. She described her process of working  in a recent email:

This projected animation, called ‘Searching For Group Consciousness’, consists of 1228 drawings that were created using a series of digital processes. I first filmed the starlings swarming at sunset above the Albert Bridge in Belfast. I am mesmerised by the way the birds ritualistically gather and move gracefully as one every evening. It is both an aesthetical and poetical experience. On another level it illustrates some political and spiritual notions I have been interested in, such as the ideas of collective consciousness and freedom.

The subtitle Talec cites in the above paragraph is easily extended  to any view of nature, especially landscape. The response of trees to a breeze or changes in temperature are akin ‘group consciousness’, even if anthropocentric view would refute it. A  ‘landscape’ has been made also by painstaking selection of frames to be dropped.The poetic power of continuity over absences made a view of a landscape into a remarkable hymn to mist, mountains, and trees by  Susan MacWilliam.

I see some similarities in the process Talec and MacWilliam applied, but not in all its parts, nor in the outcome. Talec deforms the observed reality to obtain a visualization of an idea. She describes it thus:

To create the animation, I selected a piece of footage, kept 1 out of 8 frames, which I then started to work on using programs such as Adobe Premiere and Photoshop. It was a lengthy process of trial and error as I am not a digital artist and was basically learning as I went along. I kept working at it until I was happy with the results. At one stage I deleted all the buildings, architectural features or passing vehicles, as I only wanted to keep the ‘swarm’ on its own. The latest process was to add an image of Earth from space as a background layer that can only be seen through the bird-like shapes. My intent was to bring in the colour blue into it and that particular image seemed to fit in perfectly with the ideas behind the work.

The reason I find this technology so interesting is because of the possibilities of transforming these drawings into light by means of projection, which I position in relation to place or objects. In fact I have been increasingly drawn to the aesthetic, poetic and symbolic aspects of light and I have been exploring the possibilities of using light as a material. It is also important for me to balance out the use of technology with more ‘real’ materials and processes, like sculpture and performance. I then try and combine these different elements to create installations or situations that reflect political, ecological, metaphysical and spiritual concerns, such as the ideas of collective consciousness, freedom and empathy.

The method of dropping frames has been perfected by many, nearer to home by  Frances Hegarty and Andrew Stones, in the memorable Overnight Sensation, 2001, installed in St George Market, Belfast. I recall they were using only 1:40 frames,  delighted when the traders recognized themselves or their stalls.  Capturing  appearances of real people and their work place  was  as  important as capturing  the fog filling the  empty space during the night.

Talec does not emphasize appearance as a bearer of truth. She turns instead to all that  light,  sculpture and performance can do to make an idea visible, visual.

The reason I find this technology so interesting is because of the possibilities of transforming these drawings into light by means of projection, which I position in relation to place or objects. In fact I have been increasingly drawn to the aesthetic, poetic and symbolic aspects of light and I have been exploring the possibilities of using light as a material. It is also important for me to balance out the use of technology with more ‘real’ materials and processes, like sculpture and performance. I then try and combine these different elements to create installations or situations that reflect political, ecological, metaphysical and spiritual concerns, such as the ideas of collective consciousness, freedom and empathy. (email to me)

Talec’s words  map a very different take on experience and observation than the focused  James Turrell with whom she shares devotion to blue colour.  They both embrace  the aesthetic experience of seeing natural world as a life enhancing force. Her  current work holds its own precisely because it does not obey all the verbal parallels settling in the consciousness of the artist. They, on the other hand, provide a list of  the choices  she faces.