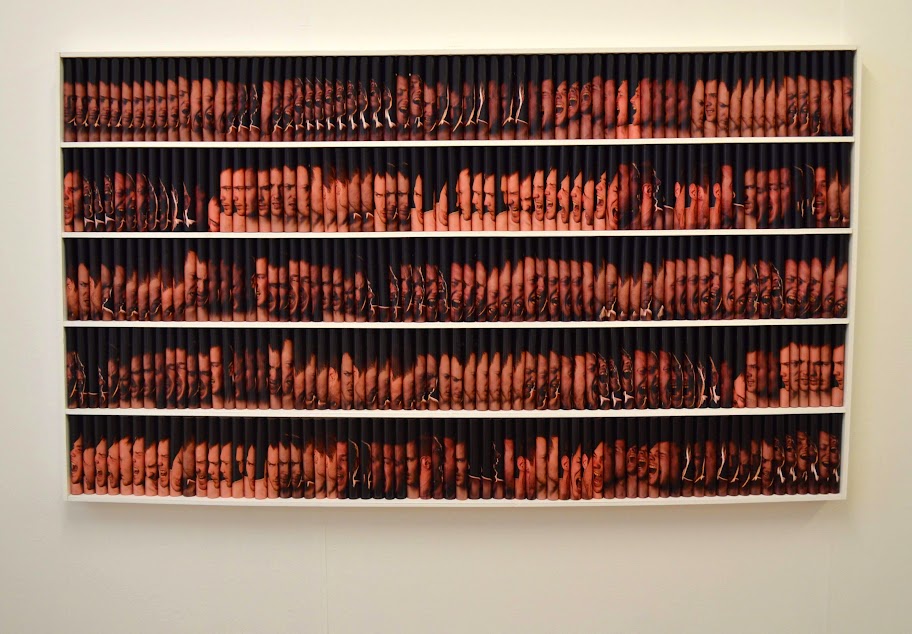 This is as big as a bookcase on sale in flat packs at Ikea, where indeed it was purchase to house hundreds of photographic prints , simulating books.  Fenning’s  earlier display favours flat grid on a wall.

My intention within my work is to explore the idea of what is masculinity? The idea of being masculine has always been something foreign to me and I wanted to explore what is the masculine male in contemporary society and culture.  Looking at ideas linking masculinity to aggression has lead to the series of work on the wall.  Material and process is fundamental in my approach to making work. The manipulation of paper in 2 and 3 dimensions has been a common thread within all my work so far. So is manipulating the photographs into curved structures and then skewering them together to create this sculptural installation.  Materials include photographs and wood. It is 180 x 100 cm. 330 photographs.. (email to me June 13th, 2013)

Mark Fanning’s  BA thesis  provides a supporting verbal parallel under its title The Representation of Masculinity in Contemporary Culture. Of course, representations of masculinity and exploration of its meaning overlap, alas, not as equal partners.  The mass culture would overwhelm a humble exploration that is more precious of the two.  Fanning narrowed down  his current exploration to to states of mind: aggression and anger. Not the best choice, some women are aggressive and angry, and not all men are. Nevertheless, this erratic stereotype allowed Fenning to focus on the process of making an idea visual, visible, even if the outcome is just one of many possible. Any idea may manifest itself in a number of visible, tactile or audible  works of art.   Resorting to a stereotype of masculinity is understandable, given its complex and slippery content, nevertheless it is not a full exploration. I would need to compare his visualization of aggressiveness and anger on both male and female models.

Masculinity as a construct includes three strands: biological, traditional and ideological.  It distinguishes organisms on the basis of their reproductive organs; tradition relates maleness to traits of behaviour  perceived as typical for the male of the species; it relates to a nest of concepts as if appropriate to the male of the species, namely: virility, strength, toughness, robustness, ruggedness, muscularity.  Consequently , the subject matter is too vast and  presents its own existential doubts and insecurities.  The first step must be focusing on particular strand of traits, represented here by facial expression of aggression, and wrath. 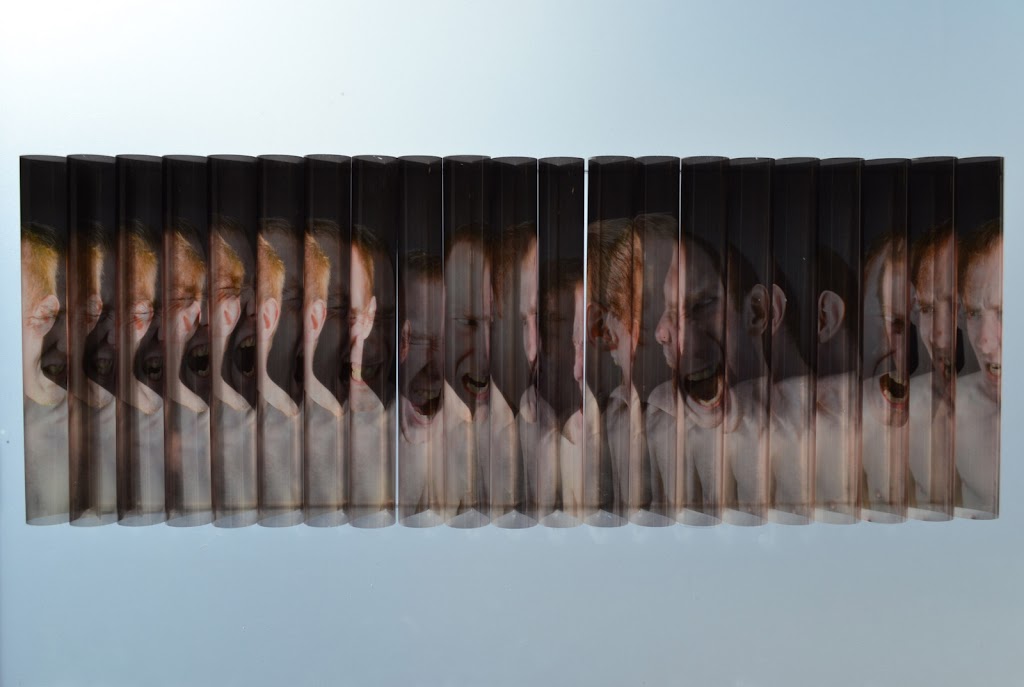 The bind between face and state of mind is a well established visual strategy,  made famous by morality lessons in baroque sculpture and painting, as well as by Goya’s paintings.

Braun and Goya recognized the value of a solitaire mode  for representation of a state of mind, whereas Fenning puts his faith into multitude and repeat. That choice crops up so much in current art that on one hand it makes work instantly as of our times, on the other it feels enslaved by other means our culture disseminates information.  The older art reveals instantly the main tenor of the the work and  its moral drive, and afterwards slowly as in an archeological research, layer by layer of fragmentary meanings, e.g. the prisoner’s right palm is particularly rich in meaning.

Fenning slimmed down the richness of descriptive, sensual and expressive means, as if in adherence to the 20th C Minimalists, namely the principle formulated by Robert Morris in 1966:  parts are bound together in such a way that they create a maximum resistance to perceptual separation. (Notes on Sculpture 1-3). Minimalism is associated with a reduction  of means, materials, or anything that echoes irregular multitudes,  while a relentless repeat of an element is cherished as the appropriate visualisation of a concept.

The painting is reduced to stark simplicity, impersonal handling  and dominant repeat. The interaction with the viewer issues demand for experience free of the pre-ordered  narrative.  Paraphrasing Stella: A story of what is seen, is what is seen. On a deeper level, resulting simplicity activates aesthetic experience that contains moral drive for values that are not compatible with non essential multitudes.  That is reminiscent of the Japanese Wabu-Sabi  aesthetics that appreciates absence of unnecessary means and materials.  At a glance, there is a paradox: repeat  triggers the suspicion of itself being not necessary, of being superfluous. The solution again echoes Japanese solution:  the considered setting of smaller form in a vastly bigger form. At its most sublime  it is demonstrated for example in the sand garden in Ryoanji temple, stones placed sparingly in a huge space (Japan, 1480)

Fenning’s mix of strategies points to rich sources, and is in its own way reviving what may be not obvious to his audience.  Paul Klee once imagined an artist like a tree: the being, the world  are the roots, the new work of art is the crown, and he or she is like the tree trunk connecting what is not obviously visible but is known, what is not yet known but is made visible.

Bookshelves do not offer space for meditation, books offer ideas and aesthetic experience as well as knowledge.  Adaptation of the form of a book to show a limited fragment of a print turns each into a lie.  What looks like a spine of a book is the bend middle of the print enveloping precisely nothing. A thin air.

Picasso’s comment that art is a convincing lie, meets surreal connection and a touch of dadaist’s sense of humour.

An allusion to books could rescue the so far pushed aside role of narrative in this kind of art.  Is hidden behind the shiny scroll a story? About the anger or aggression? The calm regularity speaks of clarity and order. The “spines” of the scrolls reveal the fragments of printed faces, that is first and almost visual, like a cartoon or a silent film.  Instantly, the perception  shivers in front of the frivolously incomplete and fragmentary images. One implication is that an idea cannot be made visible in full. The other is an opposite – whatever can be made visible is partly hidden, as if deliberately frustrating or testing the visual force.

Jiri Kolar cut images into parallel strips to make viewing more difficult, slowing it down, making an instant impact to embrace both the image and the masking of it.

Both Kolar and Fenning need to be seen in original, the scale contributes to the meaning. In small scale lot a lost.

I have mentioned Fenning’s predilection for humour / play. Interestingly his earlier work provides evidence also for another link to Japan, origami.