While looking at Cannel’s Paradise Lost I asked him whether he knew about the exhibition This is Tomorrow. “Yes, Richard Hamilton had been the early inspiration.” Hamilton claimed once that he reworked ideas of previous artists, naming also van Eyck and Velasquez. The light and spatial organisation, and the direct gaze of the figures support that, although Hamilton meant the collage to be an examination of ‘our new visual environment’. He proved that old and new can co-exist. Traces of Hamilton’s aesthetics appear fifty-seven years later in a digitally printed photomontage also dealing with visual culture as a source. Hamilton thought modern art should be popular, transient, expendable, low cost, mass produced, young, witty, gimicky and glamorous. Cannell has reworked some of those ideas.

Richard Hamilton: Just what is it that makes today’s homes so different, so appealing, collage, 1956, part of the exhibition This is Tomorrow, at Whitechapel Gallery,London

Hamilton was attracted to computers for the “possibility of perfection” – a desire shared by many artists across the globe at present. The Japanese artist Shiho Aoshima (b. 1974) makes collage electronically using sophisticated software. Her animation, even in a still photograph, instills an illusion that those invented organisms appear alive and posing for a photograph called City Glow. The stereotyped child faces both belong to and are imprisoned in the worm-like bodies dressed in skyscrapers. Aoshima shares with both Hamilton and Cannell a focus on urban western culture and the free and ironic disregard to scholarly / academic treatment of the subject. Instead the imaginative departure from the habitual or popular view invites links to popular culture, animation and fairy tales.

That point is not only that collage can be made in new ways, not just gluing cut outs on paper or canvas, but also how scale and grouping of previously unrelated fragments of the real while insisting on truth, is sincerely invented.

Below is an opposite sequence: collage of materials and forms predict real future buildings, the imagined becoming real. Compared to Aoshima, Gehry’s forms look more fantastic and less believable.

Collage offers flexibility of moving from desire to adaption, from matching to replacement, from possible to wild fantasy. At the end of his reading a fairy tales, Hans Christian Andersen (1805-1875) displayed a collage or a paper cut out, as material proof of the truth of the unbelievable story. His dexterity in making a collage with scissors and glue is documented by the paper bookmark with a figure holding fans in each hand, a mirror figure with swans and dry flowers. The dorso carries a handwritten note that it is a work of H C Andersen. 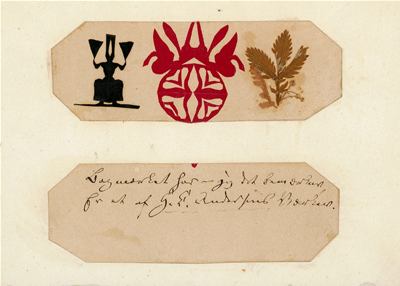 Both Aoshima and Andersen cherished the magic of visual force to tell a story and carry a meaning by the way the material is given a new identity. There is one of Andersen’s cut outs with the theme of ‘our visual environment’ – of his time: 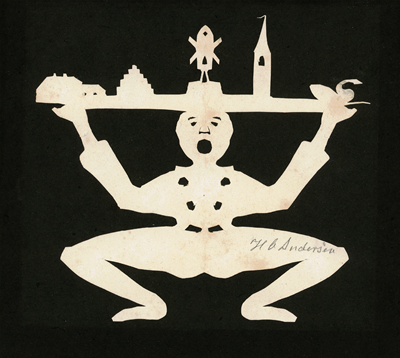 The Afro-American artist Laura Jean Lacy (1932) prefers collage for its capacity to make up her visual environment by juxtapositions of African antiquity and contemporary urban life, this is how it was, how it is. She cherishes the shift from the real to the spiritual, aiming at community as a sacred place with no date on it. Literally.

The triple bind between real and imagined, old and new, observed and invented forges a particularly happy constellation of conditions for a collage or photo montage relevant to Stuart Cannell’s Paradise Lost, 2013, his take on “our visual environment”. He describes his intention as follows:

‘My work is an exploration into the representation of glossy imagery used in today’s society. I use collage as a means of creation as it is the literalness within each image that I strive to exploit.

Through researching current imagery we look at on a daily basis, we can identify what type of society we live in – or possibly what type of society we believe we live in. In today’s glossy magazines we are being feed up-to-date information on new technology that we must own and new fashions that we must partake in. There are endless pages of pictures and articles discussing pointless trends, such as the newest watches or suits that will give us that ‘x-factor’ in our lives.

The idea of ‘glossy’ style living is significantly linked to the images that I was collecting. This has been mirrored within my work as every piece has a glossy element. Some pieces, such as the 3D collage prints, it may be quite understated, however, within ‘Paradise Lost’ and the resin casts, the gloss quite evident. I want the viewer to constantly question the piece, whether these are fantasies or realities. Having the different elements of gloss is almost an obstruction for the viewer in answering this question.” (email to me, June, 2013) 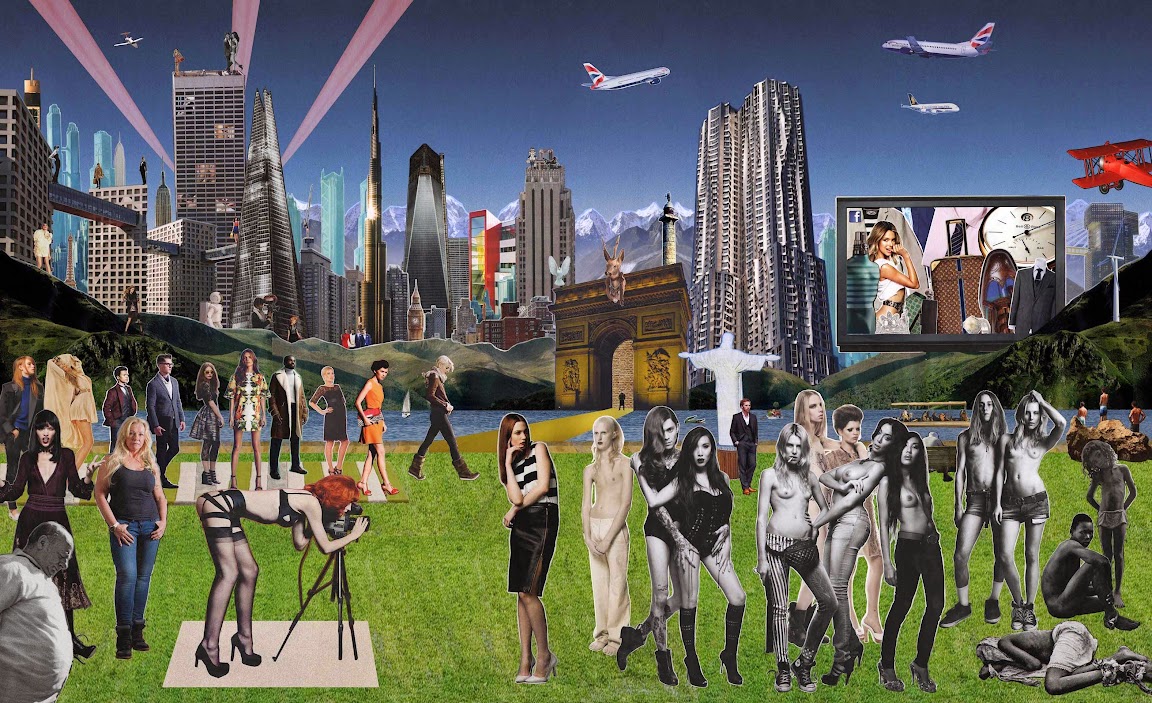 It is young, glamorous, gimmicky and witty. The composition relates to H Bosch’s Garden of Earthly Delight, starting with groups of figures absorbed in their own being at the foreground, water and hills as a narrow middle ground and skyscrapers and planes carving out the sky above.

Although dwarfed by the man-made blocks of concrete and glass, the snow capped mountains introduce a mystical and eternal element that acts as a majestic powerful observer of the multitudes on the lower planes. The ice-blue-green silhouettes between the mountains and the skyscrapers seen in daylight appear also behind the out-of- scale projection screen. Such irreverent treatment of scale is observable in the painting by Bosch, a strawberry becomes as big as a shelter for a human figure, delivering the poetic truth and magic of surprise. This image is in-congruent with practical life and logic, and therefore open to rejection on the basis of expected match with the observed phenomenon. 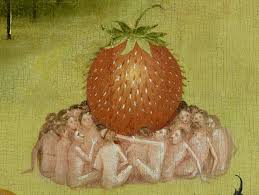 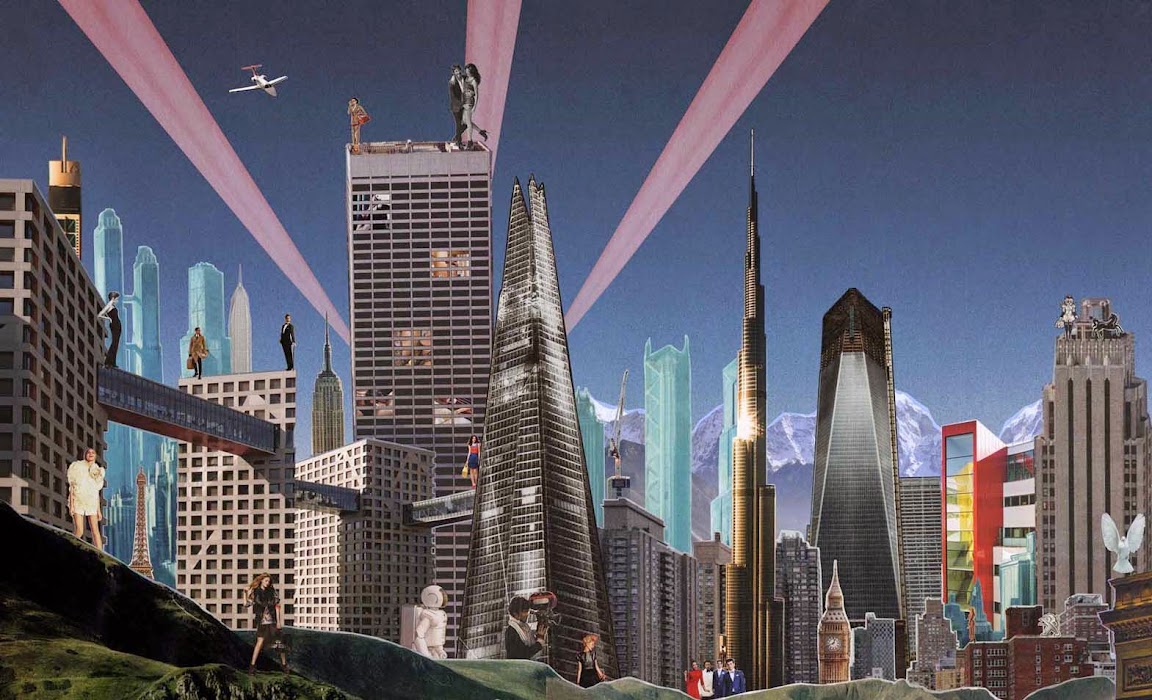 At first glance, the cityscape panorama offers a number of in-congruent scales, heights, distances. The Eiffel Tower is too small and too far from the Arc de Triomphe de l’Etoile whose nearest famous neighbour is Big Ben from London. The mixture of skyscrapers from different cities, e.g. London, Dubai, Hong Kong etc, does not depend on correct placement, or scale or recognized use. Instead, their individual forms cluster together as a sign for rich users, as seats of business and banking. A patriotic arch, or clock tower are made here less important, yet made to belong to the same thread of interests, and concerns. Dainty figures appear at random in a relaxed mood, almost as remnants of the army of workers the skyscrapers accommodate.The figures appearing on rooftops associate with statues by Antony Gormley, Event Horizon, installed in London, 2007 and New York, 2010.

It is not so long ago that the skyline was a sacred space. Air travel, search lights, space programs changed that. Now and then, artists create a minute model for lost comfort above the horizon. The engineered web of Saraceno’s space for feeling outside the confines of the Earth even if only imagined, appeals for its poetic seduction to climb and meditate.

Down on Earth, for his lost paradise, Cannell prepares a water way for sailing and a zebra crossing over manicured grass for standing and walking.

The left hand side group is quite complex: Several figures gaze at us after they gazed at a lens, others look to the right, unaware of a photographer. At its most poignant, the obese half-figure at the lower left frame, ignores all, us, the photographer and the rest of the group. Some are clearly models, others appeared in the news. The importance of photography as a source and status is embodied in the redhead model behind the camera, both placed on a mat. The lens is directed at the right hand side of Paradise Lost. 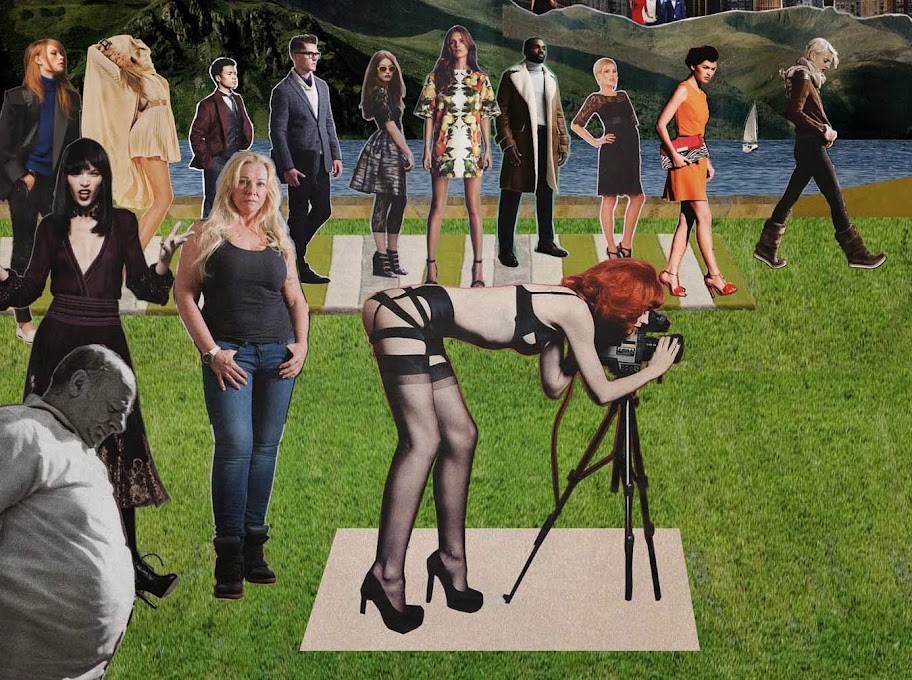 The group that appears in the lens frame is a heterogeneous random juxtaposition of western models and topless young women set steps away from the bottom of the frame. The figures do not reach above the other bank of the river, thus separated from the huge screen and the skyscrapers. The group’s expanse leaves only a sliver of space on the right for three figures: one lying, the other crouching and the third one standing. Three ages of disadvantaged persons, a child, a young person and older person lying with chains around the ankles. The only figure denoted as male walks on the diagonal towards these three, moving away from the white statue of Christ the Redeemer from Rio de Janeiro now facing the skyscrapers above. 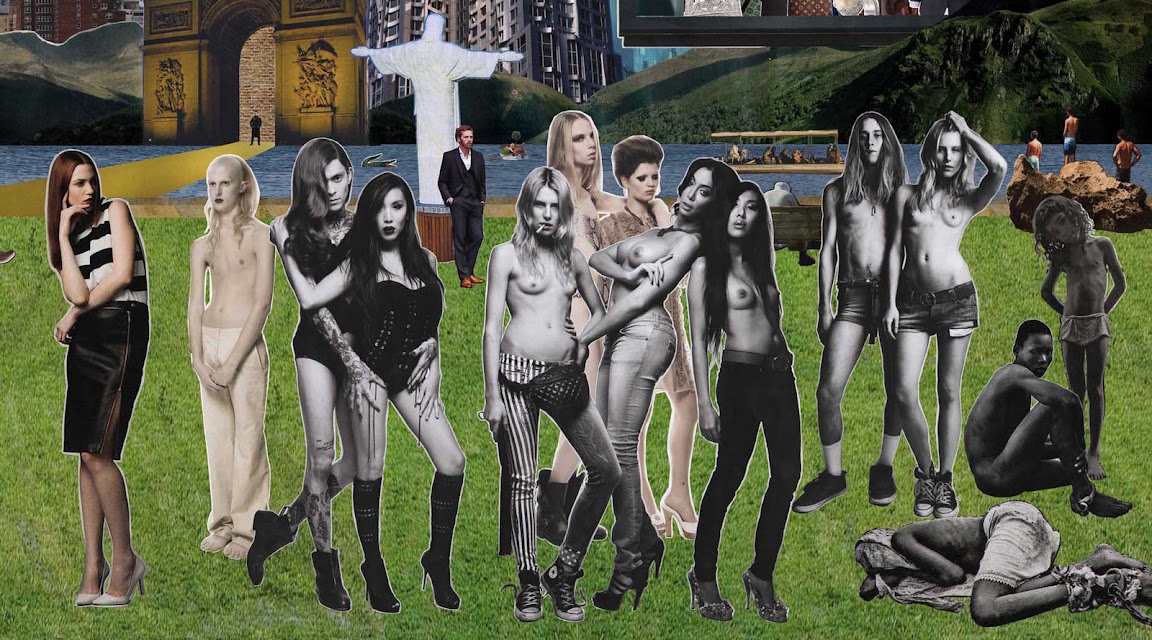 Cannell’ strong sense for a rhythm of forms in space on a flat surface imposes an order on the randomness of sizes and distances. In lesser hands, with lesser trust in the visual force, the composition would not have the calm, if slightly neurotic, unity so reminiscent of Bosch. It also reminds me of Fluxus, specifically Eric Andersen: There is a lot of going on, but nothing actually happens. The combination of subjectivity, nuance and virtuosity reminds me of medieval poetry:

Cannell’s photomontage forges its own context by connectivity with other works of art across media, time and place. And that is a good sign.