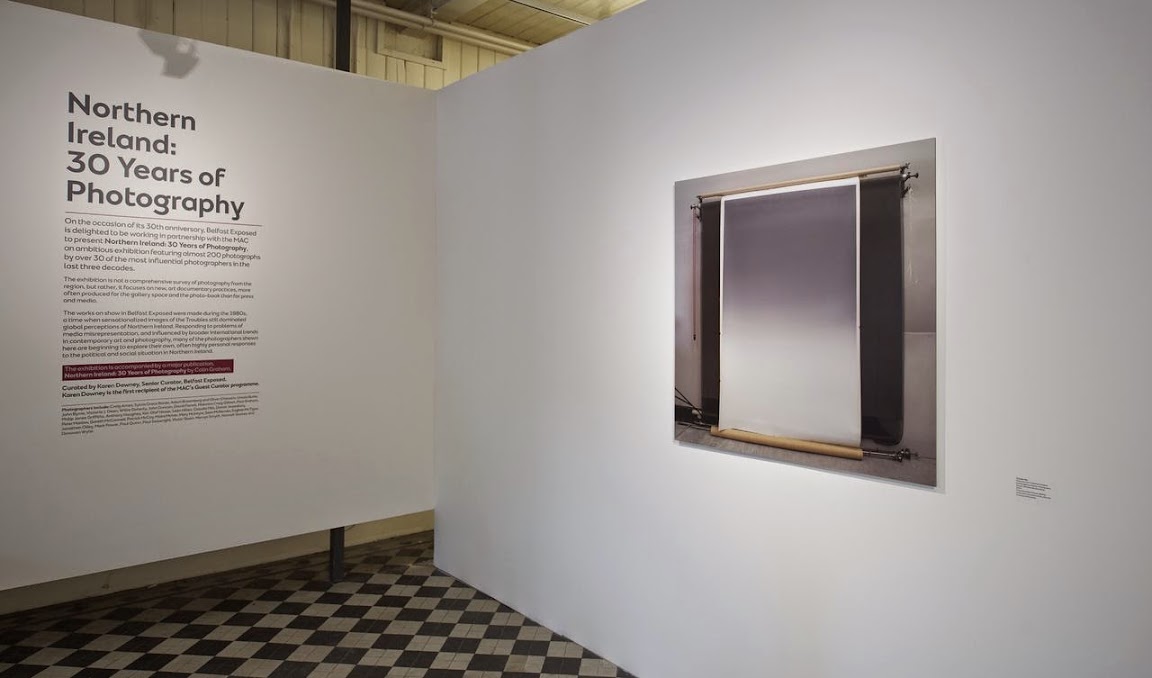 The exhibition of 200 photographs by 36 photographers in two venues, Belfast Exposed and Metropolitan Arts Centre, has been curated by Karen Downey  to “present photography in and from Northern Ireland as a reflection of place” (see press release).

A substantial publication by Colin Graham carries the same title as the exhibition, and offers the first  thorough overview of its subject.

The display of some 20 photographs in the smaller of the two venues, Belfast Exposed Gallery , enchanted me by  meaningful visual rhythm, sensitivity to the subject matter, scale and technique. 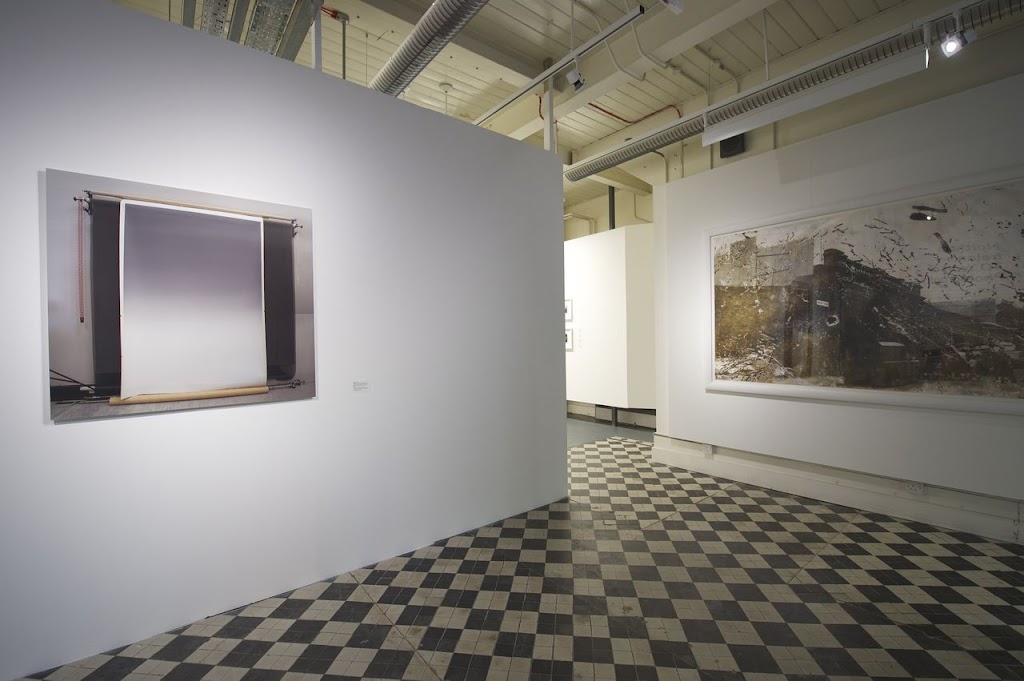 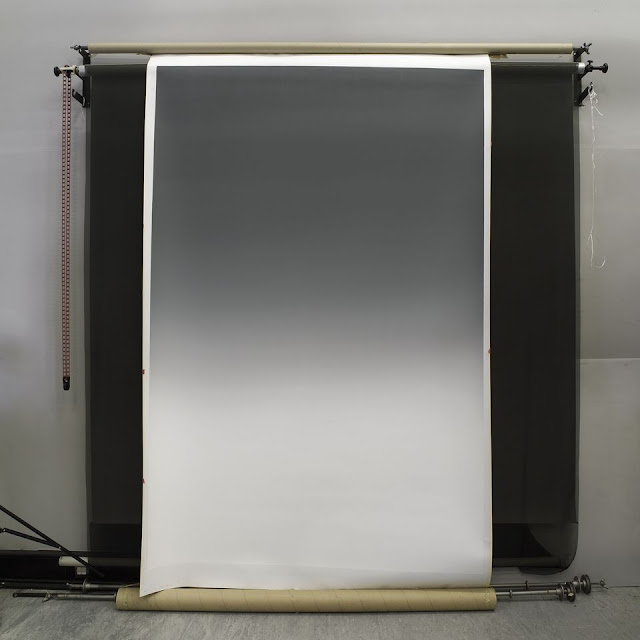 Reading the caption removes the enigma evoked by direct retinal encounter, perhaps that is one of the reasons it appears also on the cover of Graham’s book. Being an image of the passively waiting  tool to take another image, its mixture of description and abstraction works as a willing gate to and  accommodation of  all  the exhibited  images in somewhat  equivalently generous, yet uncommitted,  embrace. 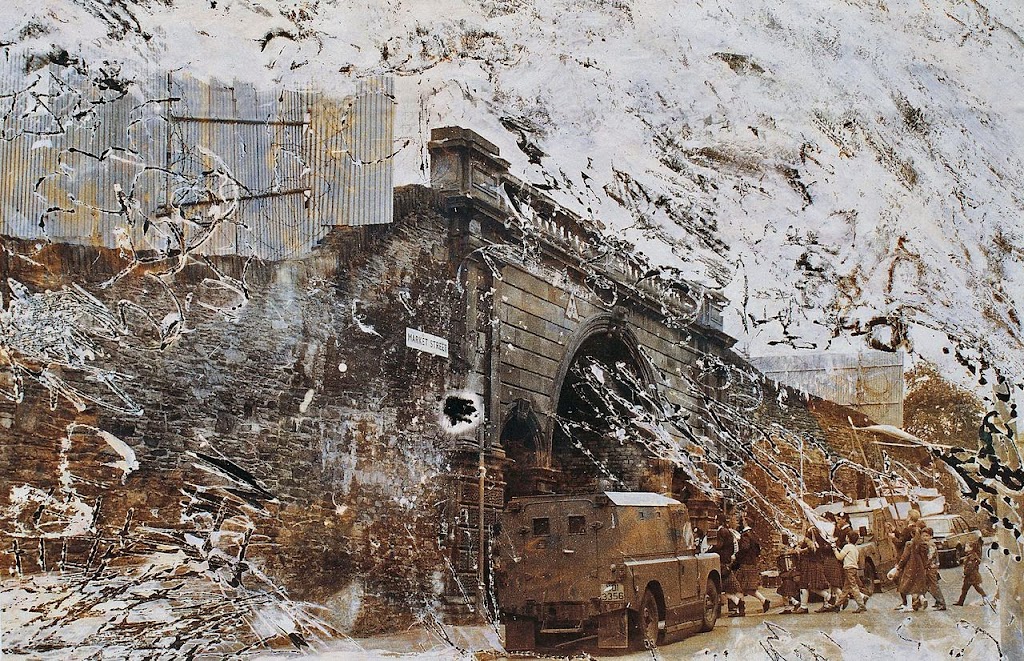 That is tested by the Sloan’s  large-scale,  intimate, view of children marching with  adults under the arch of the Derry walls. The intimacy of the bond between the then-current conflict and the future of the next generation is palpable. The police vehicle and the marching figures are threatened by the hail of missiles, denoted by the numerous marks, that on their own could exist as an independent abstraction.  The angle of framing  evokes stress of instability and of undesirable consequences.  Sloan’s painterly intervention over the print looks  also like strokes asked to cancel something, like  memories of shots being fired, like cuts hovering above the document and hitting the masonry.

Sloan’s image is noisy, even angry.  It is a witness of great harm.

A  calm and misty image with two lines of words over the image,  hung on the wall far from the entrance, could  not minimize  the visual noise of Sloan’s image.  It is Willy Doherty’s The Blue Skies of Ulster, 1986. It  injects a softly sorrowful irony of an overused turn of phrase.

After the drama at the entry, the left-hand-side wall sings. 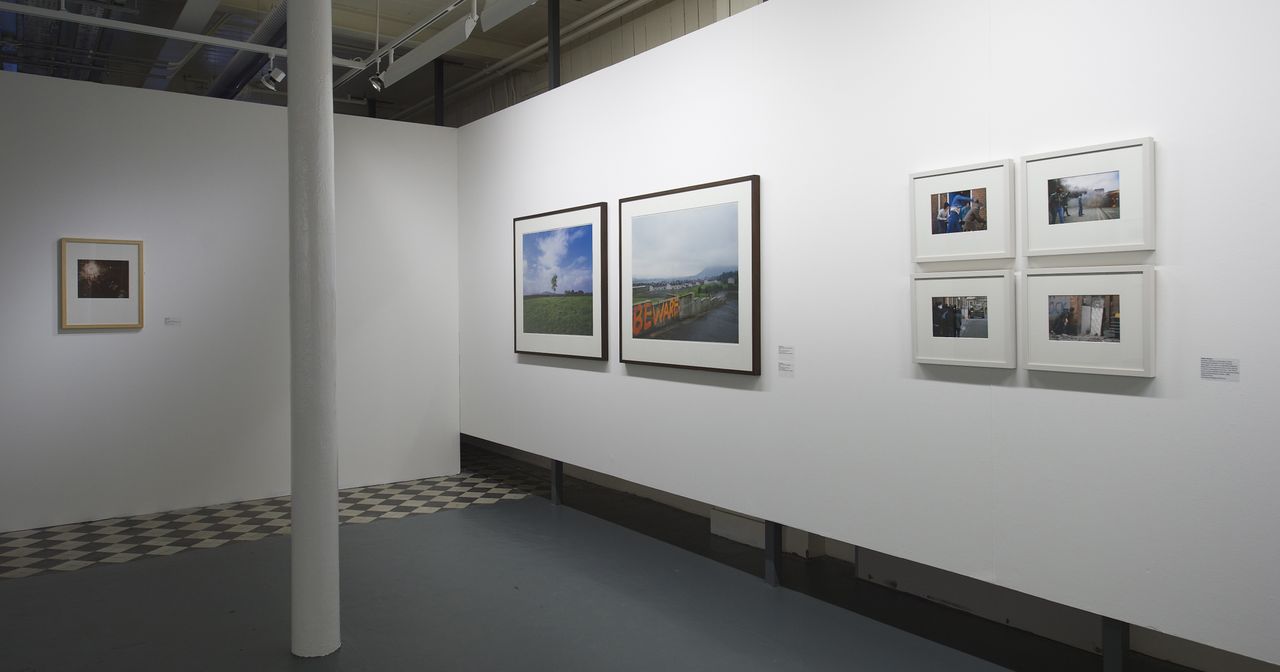 The envious desire of Kandinsky that painting be like music, received a paraphrase, a display can be like a song that starts with two strong chords,  P Graham’s  photographs of a landscape. 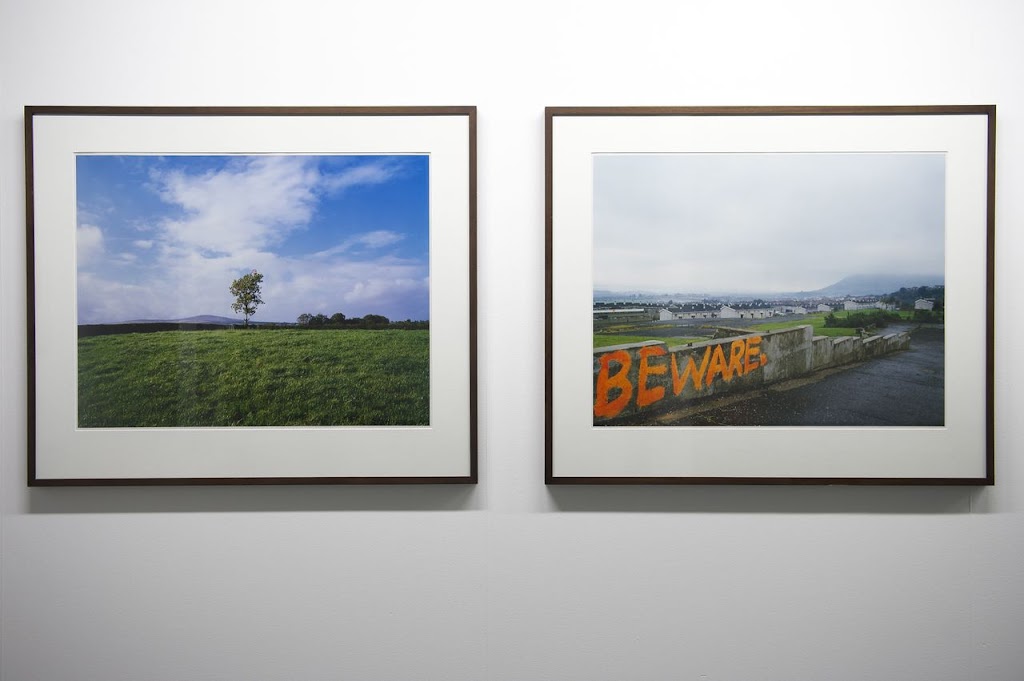 The landscape is the proverbial emerald island, even when partly appropriated by housing.  The juxtaposition of views of countryside and urban settlement  implies that both were hit by the Troubles.

Is it a  pleasant landscape with a solitary tree…? 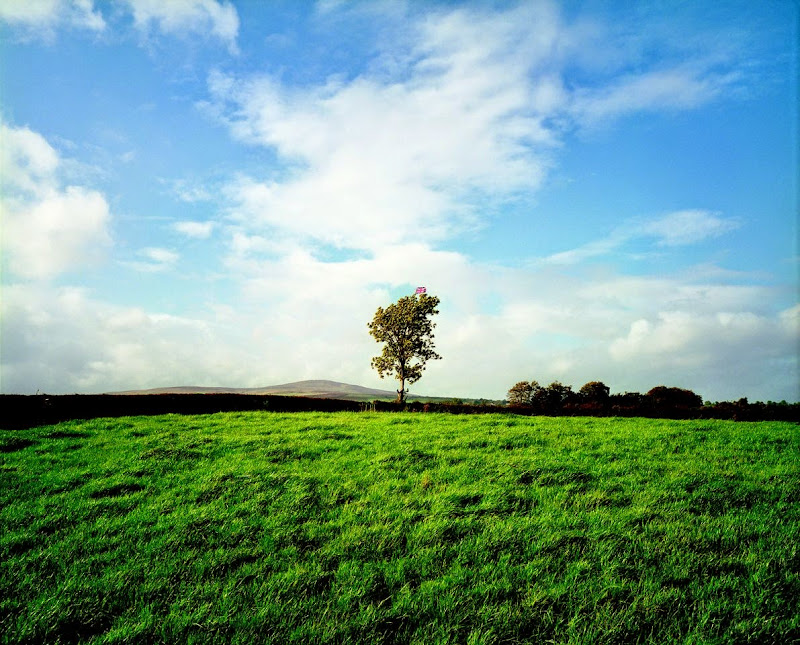 Barthes would probably call the tiny union flag a punctum. Easily overlooked, it connects to troubled land only when you read  that this green land belongs to the troubled county of Tyrone.  If not,  it may be read as a playful manifestation of belonging to a denominated state. The slippage from political to pastoral undermines the political ground.

Their  majestic chords have diminutive followers in a quartet of  shrills and screams  in Peter Marlow’s  images of rioting. 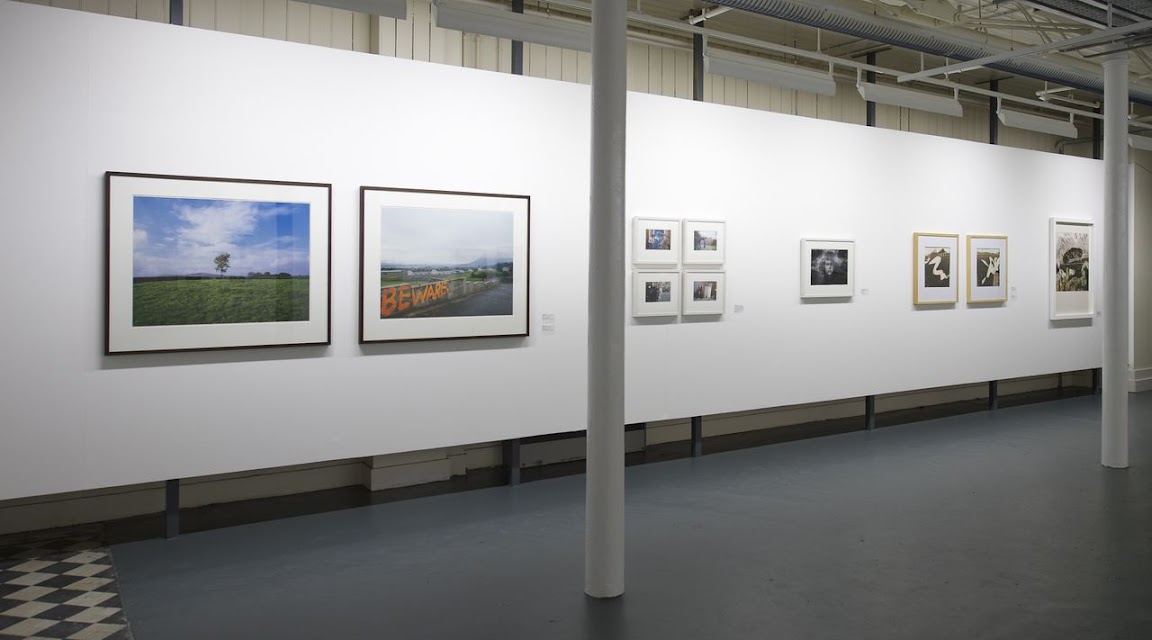 Phillip Jones Griffiths delivered  easily the most powerful image in this exhibition. It is not dependent on any verbal support. It captivates my attention in a complete silence and shares an experience, which I never had. It is also a rare glimpse at the Troubles experienced by  those ordered by authorities to keep the warring sides apart, and the majority of us safe. A face of a very young, disciplined and  somewhat bewildered soldier. 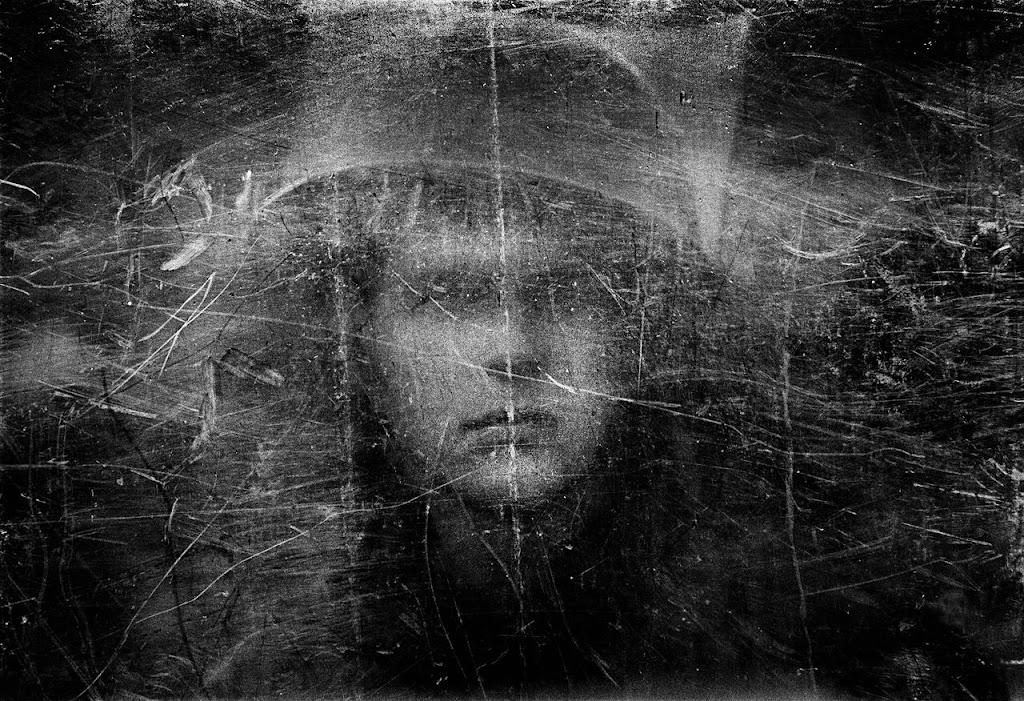 This photograph also shares a connection to the  motif of scratches.  Sloan populated the surface of a document with over the Market Street.  Sloan added them after he took  the photograph.  The scratches on the shield were there when Jones Griffiths pressed the button. The marching crowd in Sloan’s image did not have their visibility impaired, the defender of the public order had, moreover, he felt the blows then and there. The focus on the actual event understandably turns a photograph into a document.  However,  Jones Griffiths’  photograph makes me think of Diane Arbus being cited as saying: ‘if you have got a  camera, you are carrying some slight magic’. The framing, focus  and graduation of the light claim this image of an unnamed soldier as art.

Achieved by complex manipulation the claim to art singles out two small colour prints on the opposite, right-hand-side wall, by Claudio Hils (both 2000, from the series Red Land Blue Land) as witty and visually intelligent.  The  rest of the installation on the right-hand-side wall is not independent from added verbal support, either embodied in the images, or in the frame. Paul Seawright adds a description of the event linked to the image inside the frame, the photographs of the place are taken after the event. Sean Hillen assembles views of London and Newry in  collages of cut outs titled Londonewry. Craig Ames adds text describing the subject, the place  where the shot was taken and by whom.

The photographs of installation  by Jordan Hutchings  approximate convincingly  the visitor’s experience of the thoughtful and elegant display by Karen Downey. It is an art too.