Since 1983 the Fenderesky  Gallery developed a strong profile through single, groups, and themed exhibition.  Led by a highly educated philosopher with  discerning eye and unfailing determination to support all generations of artists, the gallery has presented  painting, sculpture, prints and photography, with some slight preference for abstraction.

Charles Tyrrell thus fits its profile perfectly, even when considering the “domestic” scale of his paintings on aluminium, titled by a capital letter and two hyphenated numbers.

The last characteristics the exhibits share with the rest of Tyrrell’s received a charming insight from  Caoimhín Mac Giolla Léith:

Tyrrell’s systematic numbering of otherwise untitled works may be taken as a disavowal of allusion, narrative and referentiality, which is in keeping with the modernist credo that the destiny of each distinct art form is the refinement of those characteristics that are peculiar to it and which serve to distinquish it from other art forms ( see John Gibbons and Charles Tyrrell: A dialogue. Taylor Galleries, Dublin, September 2005)

I tend to read the titles as sets – of some family resemblance between its members, even if their size ranges, from small ( five are 33.6×33.6cm) to medium( nine are 50x40cm). In comparison with last year appearance, the exhibits share the mood but not the way it is locked in the format.

Answering a question from  Patrick T Murphy Tyrrell defended freedom that abstraction  offered a hundred years ago by W Kandinsky ” the first painter with such intuitive and  spiritual freedom as to eliminate entirely the unnecessary hindrance of  intellect for the art of vision.”(Hilla Rebay, The Beauty of non-objectivity, in the exhibition catalogue   Solomon R Guggenheim, Collection of non-objective paintings, 8-28 February 1937, Philadelphia:4-13).

Yes, but I don’t have packages of ideas or packaged ideas in that sense. I can pull out many statements that might put the work into context but not a crisp mission statement that has a direct line to the core of what I am doing. That is not how I work. I believe in the old ideas of journeys into the unknown. I need ambiguity, I need room to manouver. I don’t need my “thing”, my brand.( Charles Tyrell, Ten years, An interview by Patrick T Murphy, Royal Hibernian Academy, Dublin, 2001)

The painter generously described his way of working in a number of interviews.  To sum up, he starts ” with abstraction and works towards the sense of reality” through layering of paint and scraping it of in bands until he perceives, in his words, “integrity of each step” while varying the approach.  He maintains that minimalism is his base line in order to maintain “the ability of the painting to exist within itself”(ibidem)

The set at Fenderesky was without doubt a confident  reworking of what Donald Kuspit described as  Tyrrell’s synthesis of geometric structure and sensual surface. Tyrrell’s preference for aluminium as a ground for such synthesis may be visually detected when comparing the previous painting on canvas with this one on aluminium. 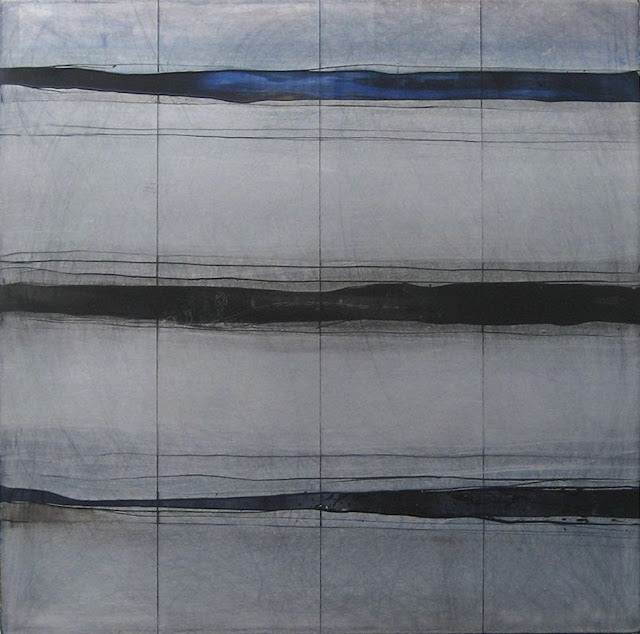 I like it for its change of pace. My main work is on canvas or canvas over timber panels. Since I started using aluminium I find that it has a faster pace. The paintings work faster and I’m more experimental. I often use it as a testing ground and often it points directions for me. It’s allowed me to be more playful. I grind the aluminium so that it has a very fine texture to give it bite, and then I actively work with the metal throughout the painting. The metal comes through in various degrees and sometimes is left in its pure state. Working it is very immediate, I can slide across it. It hasn’t got the slow grittiness of canvas. I’m allowing the metal to play a part, so I don’t have a huge build-up. I wipe on and wipe off a lot until the right moment arrives.

The above quote also contains adherence to the concept of painting described by Hilla Rebay as non – objective, a term undermined  both  by the finished object  and  by the objectivity of personal response to observed reality of working with sensual experiences of real world.  Tyrrell described the relationship between the two, the intellect’s and drawings  made during the 2006(?) residency in Ballycastle, Co Mayo:

I locked myself in the studio and worked on drawings – building images of blocks of horizontal, vertical and diagonal lines – cross hatching, which I then proceeded to break down with an eraser. I approached this as straightforward formal self-contained activity, which it was, but then found visitors to my studio, fellow artists, assumed I was referencing the great cliffs of the area with their powerful horizontal strata exposed to the eroding effects of the elements. ( Brian McAvera, Poles of Difference, Irish Arts Review, Vol 25, No 2, Summer 2008)

Whether I read is as sand dunes, or cliffs, or a sandy beach under the shallow lazy sea line, it is both autonomously abstract and true. The grid works as a reference to two dimensions of the ground on which an illusion of a fragment of the landscape insists on dimensions three. It feels like the real being put  behind the grid, our intellect, our mapping, without losing any of its vitality and natural force.

It evokes for me the playful pastiche  E H Gombrich made of a verse in Alice in Wonderland:

For first you paint an object

And then you chop it small

Then mix the bits and sort them out

Just as  they chance to fall

The order of the aspects  makes

No difference at all.

(Sir E H Gombrich, How to read a painting, Adventures of the Mind series in Saturday Evening Post,1961,  reprinted in Modern Art and Modernism, Anthology ed. by Francis Frascina and Charles Harrison, The Open University, 1982:150)