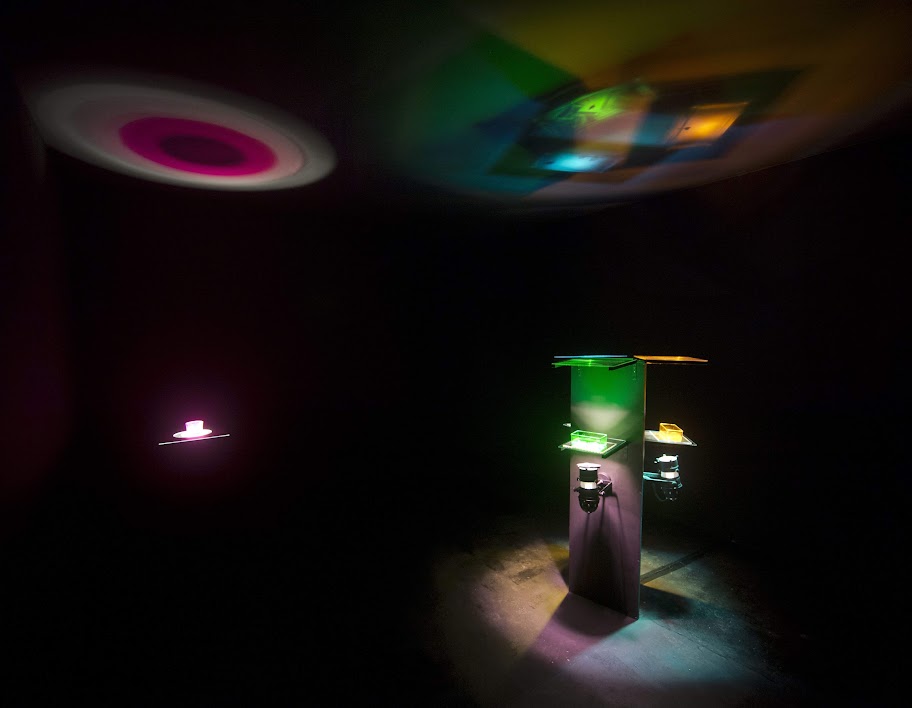 Curated by Amy Brooks it has her aesthetic sensitivities all over, with the exception of a rather massive box housing Emmanuelle Negre’s fantasy in light. The above image indicates the multicolour riches, failing to imitate the feeling to be in between and under those exuberant coloured lights.  Negre claims them to be recalls forged by first destruction of the trace of the observed phenomena and then by innovative application of cinema methods, e.g. stops, scrolling, grabbing, manual disruption etc. This means that Negre depends on the machine’s response to her intention to”deform and reconsider” a shape.  The curator wrote that Negre cultivated the crystals that emanate the colours.

While the impact of the lights in the dark space is fabulously enjoyable, the technical set up and consumption of energy are not. The last point is not just about carbon trace of this work, an issue raised by Cross and McMorrow as well, rather it is the question how the means are visible an visual. Moreover,  the pedestal in Negre’s installation stands as a heavy alien insisting on its own robust materiality.  I compare it to the way James Turrell elegantly hides such things. or skillfully separates them.

The idea of transformation of material into poetry preoccupies   Marie Farrington whose intention is to suspend objects between identities. Such an objective demands that those objects are able to hold links to those identities they are supposed to hang between and then assume another.  The floor sculpture looks like a strangely profiled  tyre cut in two …  The other identity makes it into a floor relief/sculpture/installation. Is that what Farrington aims at? That would be not enough to distinguish it from any other sculpture made of some material.  The point seems to be that what the eye sees as rubber( on the basis of familiarity of colour, texture and shape) is not that at all. The black segments are made of resin, others are made of wax, or coal, or oil, or milk.  Not all of these are exhibited.  I connect her use of materials to Ovid’s Metamorphosis. Hers are  grounded in an optical illusion and make any narrative, mythological or otherwise, unnecessary (other work on  www.mariefarrington.com) 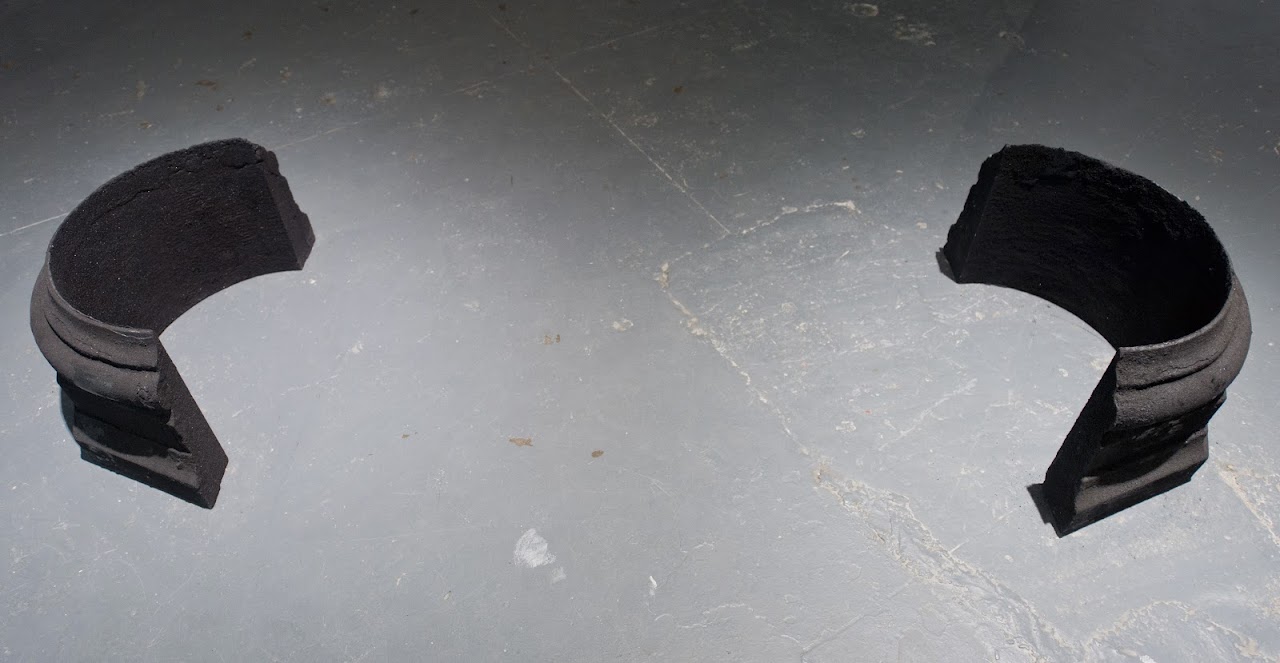 Marie Farrington, The wreck (and not the story of the wreck), 2013
Materials – Coal dust, resin

Jacqueline Holt placed calico over both gallery windows, taught and in exact dimensions. 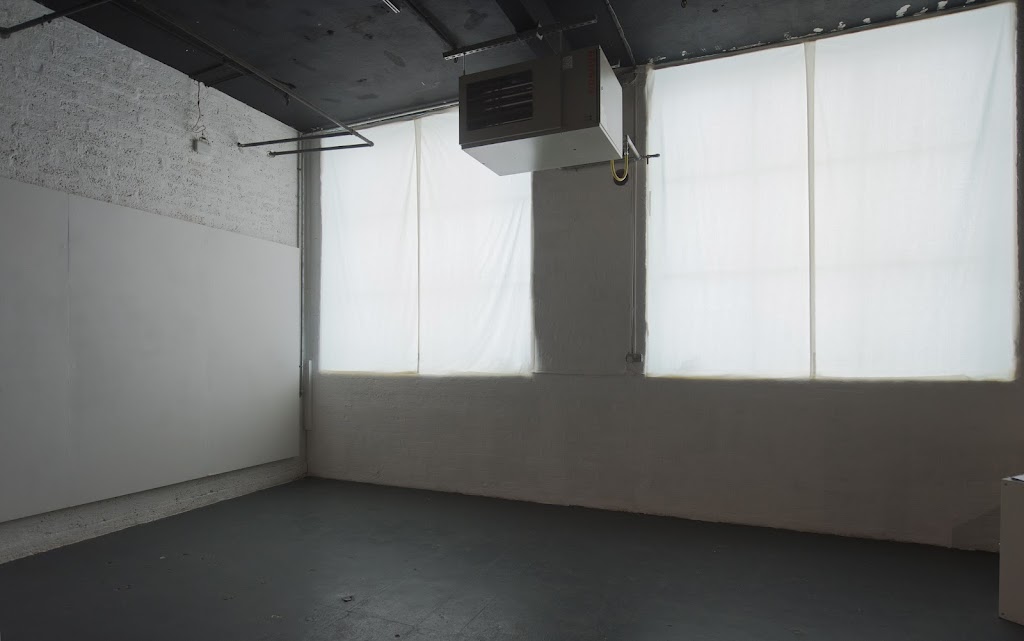 I cherish her listing the windows as her material. It  works as analogy to  any found object. In its holding tight to its identity, place and function a window subverts the autonomy of the artist additions. Holt’s calico both covers the windows and is penetrated by the light windows allow in. This commonplace experience in most homes and offices can tower mightily over the subtle nod to the minimalism and its treatment of objects. The curator tends to think of it as “a solid light cube”.

Holt states”Here I am using the language of architecture to see how space is described and defined by structure.” I do not get this when looking at this installation.  The calico only follows a surface. Moreover, it turns a window shape into an abstraction, which denies security of sensual judgement. The windows “say” not how the space is described, but that it is described, the calico denies both.

Laura McMorrow harvests an experience of spending two days in an empty shop (a part of the Household contribution to a festival). The video documents slugs being caught under the glass  jar and slowly escaping. 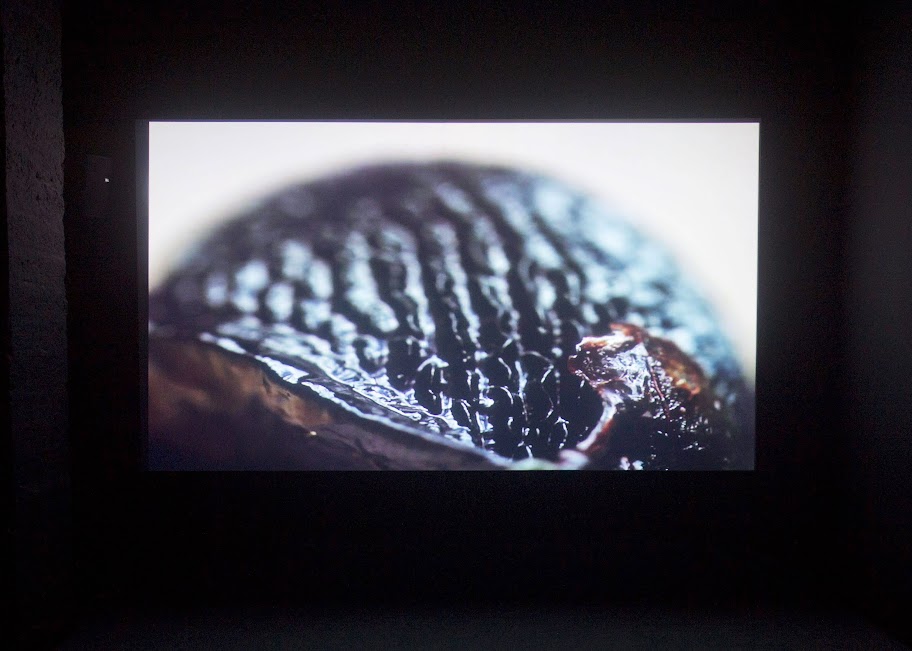 She stated:”…this work[, which] has been influenced by sci-film and b-movies including the Body Snatcher and The Tingler. Wit recent developments in the use of computer generated imagery in film making, i find myself drawn to the craftsmanship of cinema…The sound is reminiscent of science fiction, I am interested how sound can transform the banal into the sublime” That is a marvelous interest – quite missing form the contemporary visual art, or appearing so rarely, that it seems not to exist anymore. I take this work as a first step, a quite successful step, I think, as illustrated by the above detail.

I have admired some of Dorothy Cross’s installations, some I could not. Her video  combines the two aesthetic experiences, the one evoked by works like the Ghost Ship(1998), the other by the series of cow udders.   This video is rooted in her work with fishermen in Papua New Guinea. Yet, some of the dangers they all were aware there, became subordinated to rhythm of swimming and the size of the screen. The danger and discomfort became domesticated,  at times, the sensual beauty of the colours removes all the other association or impressions. Well – that’s the power of the mute poetry. I also succumbed to the musicality of this work, remembering Cezanne’s love of swimming. 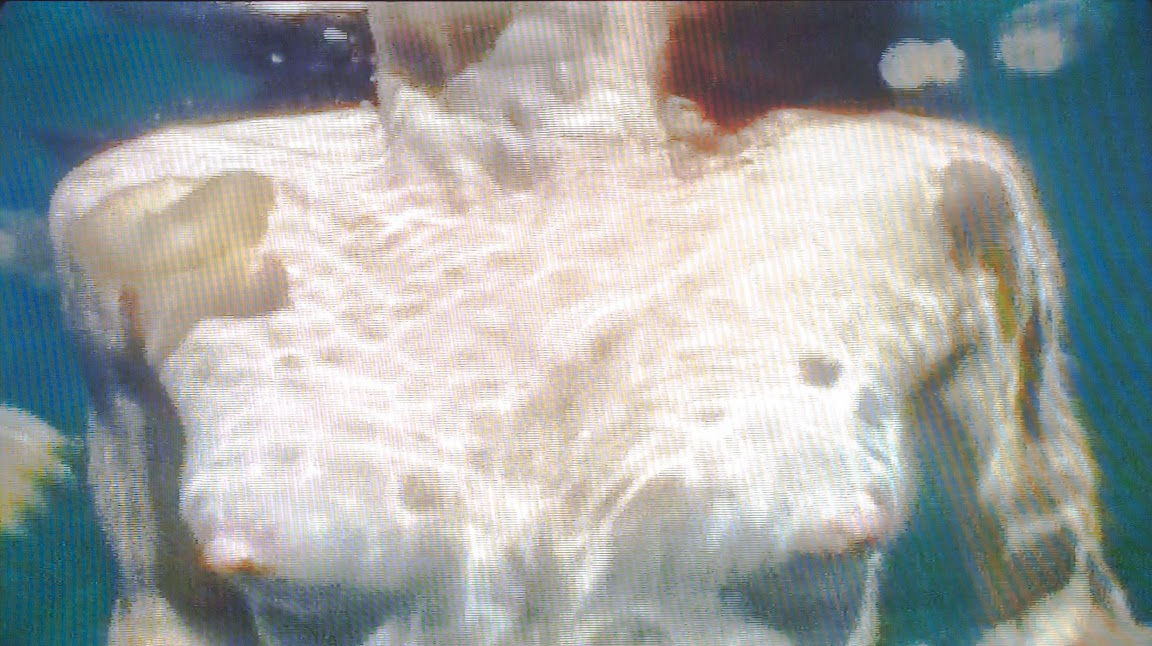 Amy Brooks’ insight that “The light reflected through water onto the woman’s body is similar to the internal organs of the jellyfish” indeed accentuates the fragility of our hierarchic beliefs.