Mac Mahon lists her engagement with space and light as a dominant concept of her art practice (see http://www.helenmacmahon.com “Subject matter is simply space and light”) Before I write about her installation in some detail, I would like to introduce the other four works of art that  formed the TACTILE exhibition at Catalyst Arts from 7th until 14th March 2014.

Clodagh Lavelle   offered   High Heart, 2012  – a circular installation  of soft sculptures, connected to ropes and pulleys, to enable people to change the shapes and where they were.  She quotes  four lines from a poem  Under the Paris Sky  by Leonard Cohen  that gave title to her installation: Her legs are long/Her heart is high/The chains are strong /But so am I.

Her inspiration  appears to be grounded in a paradox of our existence:  the idea of human beings trying to protect themselves connects to” the sense of the unattainable” ( her statement on the gallery handout). 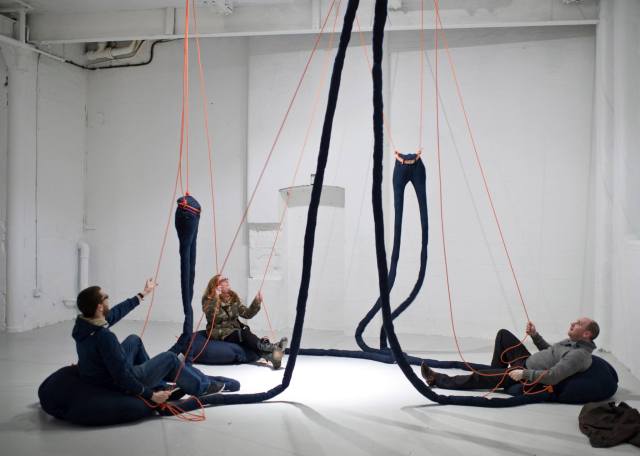 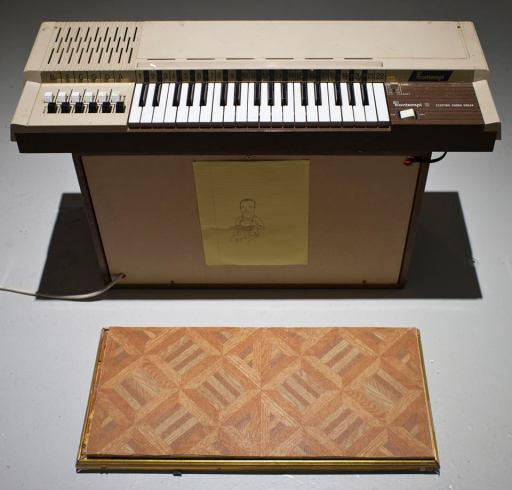 In  place of a dry artist’s statement, Mahon inserted a poem which starts with a  line  I dream of you  and ends with  I am your dream artist.  In between the two he gives a salient and honest profile of an inventive artists with sense of humour.

Rachael Campbell-Palmer  constructed a circular timber structure from which were suspended on a rope spheres  destined to be smashed against one another. I saw just the debris   of the Activity 1:3 Embrace Indecision Conquer all Obstacles, 2014 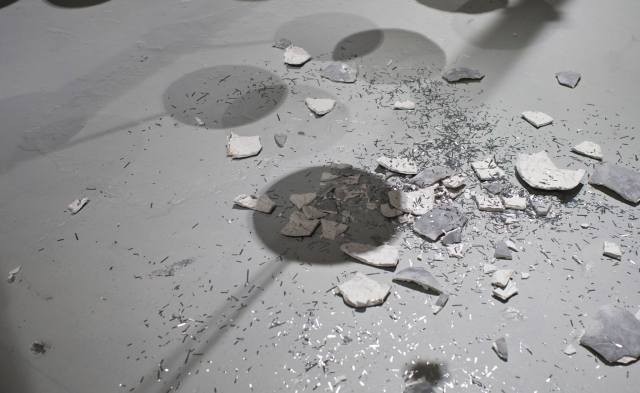 Her rendering  of play facilitates to heighten an awareness of the similarity between the joy of both construction and destruction – as observable in childhood.  In adulthood the disability to perceive the difference between the two requires  deviant character. The exhibition was about touching works of art in opposition to the ubiquitous warnings  in galleries and museums. Looking at the broken spheres – just one line: Ne touchez pas – il est brise.

DSNT   (Oisin O’Brien ) projected a multicoloured “stain”  which pulsated at variable speed and depth on the white wall – both escaping accurate observation. The guessing and catching up was highly enjoyable, difficulty to register and to  remember the changes had not diminished the intoxicating  high speed cognitive play of hues.

Titled  prtclez m8, 2014, it was made with MacBook, projector, xbox connect and laser eyez ( I guess that is the software), and continuously changed its size and appearance – in relation to people moving in front of the image.

Helen MacMahon  used an enclosed dark space for her light installation , mentioned in the title of this post.  That decision anchored it  in a scale of a domestic interior and life size bodies.

Her Polychromatic Shadow Configuration Device  re-conciliates  art and non-art, optics and aesthetics – they all remain themselves while becoming a new visible entity. Separate and integrated? This is clearly a paradox. Indeed, but one that has been understood by artists for millenia. Spirit and substance, form and content remain opposed and integral  in  Leonardo da Vinci.  Not just artists, also thinkers engaged with that concept. Marcilio Ficino famously asserted that were the materials and instruments available to people, they would have shown their artistry by recreating the heavens.  MacMahon does not represent the light per se, but the way in which an idea may be made visible.  The idea is in the light, in the  matter. We are drawn away from how it works and how it is made.  We provoke the rays by moving in front of the projection not to see an illusion, but to evoke the beauty of the natural law. The order and number of colours and tones depends on distance, angle and timing. 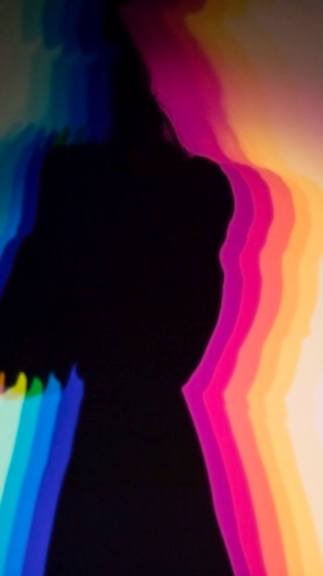 Transformation is happening spontaneously as a result of free play. 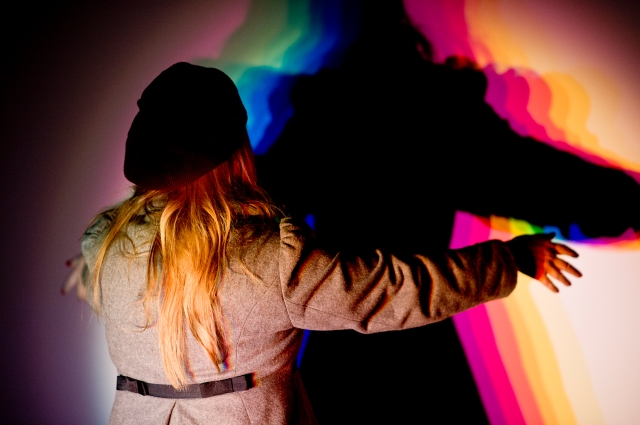 As E  H Gombrich ( in Symbolic Images)suggested it is towards the intuition of the participating viewer that the appeal is ultimately made. 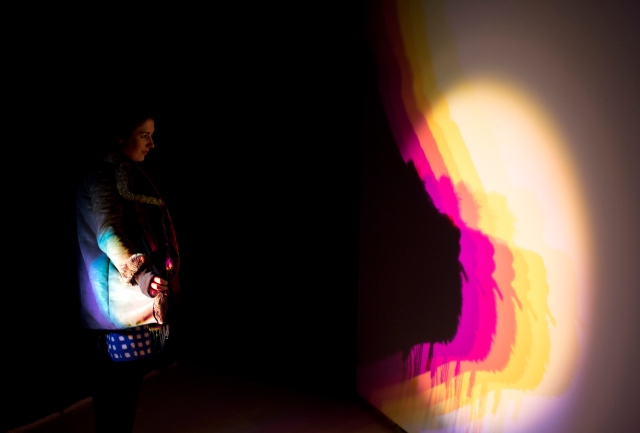 An objective level of truth connects to the imaginative subject  via a play with the installed set up,  a process which posits the intrinsic value of art in terms of  its effect on the viewer, and its place in the aesthetic experience.

The external object of perception  is an image of the viewer’s being,  it is made by her free volition. Whenever art enhances freedom, be it for an individual person or a society, it touches upon the tradition, which is referred to as “classical”. The emphasis is on vita activa, the focus is  on the relationship between the viewer and art, on the participatory and re-creative experience a work of art may offer. This idea was well understood by the renaissance artists, it appears in Leon B. Alberti’s theories. Thanks to E Panofsky’s  Idea ( A concept in Art Theory)  the Ficino’s central theoretical tenets are readily accessible in English.  There is more. At one point Ficino describes the artistic strategy of Botticelli: to represent earthly beauty through its inherent formal principles of line and motion, beauty is at once a form of the body, and it is not the same as body.  Abstracting from matter leads into matter, the function of the visible image is to raise the mind above the image without leaving the image behind. Concordia Discors.

A resonance with similar concept  made visible by Janet Echelman +Google in Vancouver recently  contributed to the good feeling about the TACTILE exhibition.

All other images courtesy of Jordan Hutchings.