Posted on September 14, 2014 by Slavka Sverakova 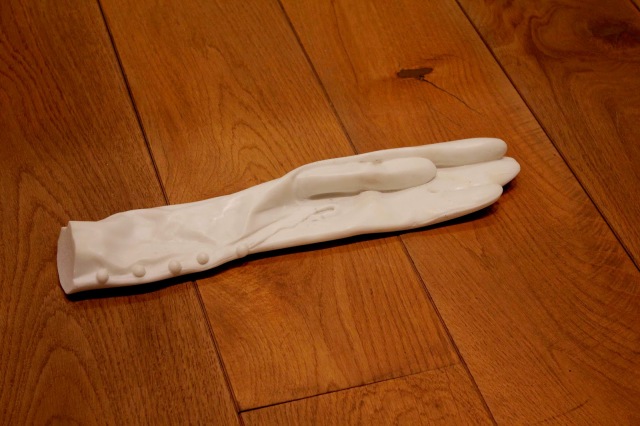 First exhibited by Ingleby Gallery in Edinburgh  from  1st August till  21st September 2013  the  facsimiles  of  ten Max Klinger’s  etchings from 1881,  and Liversidge’ s large scale prints of them  were complemented by an imagined room, constructed in the belief, that Max Klinger could have worked in.  There is a clue in that addition – something  imagined could match something real.   After all, the second etching repeats that clue: a man, unnoticed by anybody but the viewer,  picks up a glove possibly dropped by the woman skating away.

Comparison with Klinger’s etching centres on similarity, difference being in the format, in size, one private like a page in a book, the other public like on the wall of a gallery. 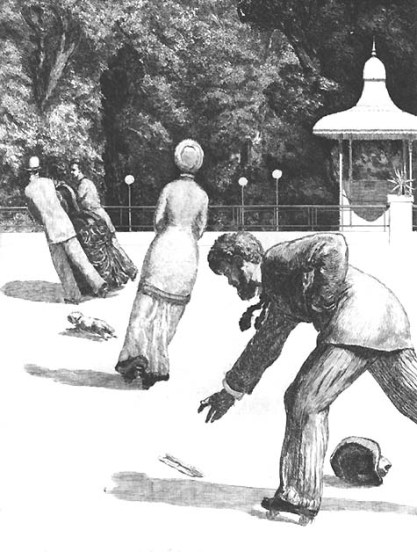 My comparison is made suspect by the larger print on the wall of the gallery appearing here smaller that the  Klinger’s print below it. I have left the discrepancy, as it allows to read the zig zag path for the eye to follow the perspective.  The depth of Klinger’s image  in this scale is more hypnotic than on the large Liversidge’s print. It is an optical illusion, distribution of all the marks is – as far as I could see- identical. The only difference is the scale.  It flattens, diminishes the in-built drama. Maybe it wishes to stay private. Like a feeling.

“Klinger’s theme is obsession: a visual poem on the madness and mania of love, the glove a lingering symbol of the artist’s desire for an unidentified woman about whom he knows nothing. In Liversidge’s hands the emphasis shifts and the story becomes a much wider one asking questions on the obsession of creativity and the workings of artistic imagination.”

“The series in question, known as Ein Handschuh, The Glove, was first published as a set of 10 etchings in 1881 and recounts the bizarre psycho-sexual adventures of a lady’s elbow length glove, dropped on a Berlin roller skating rink and picked up by the bearded figure of Klinger himself. The action that follows, in a series of dreams and nightmares, anticipates both the theories of Sigmund Freud and the hallucinatory style of the Surrealists.”

The site of the link  between Symbolist visual art and Surrealists  is the dream as a source for invention.  Liversidge deliberately bypasses it as not obtainable.  From the point of the “new” this exhibition fails. Instead,  confidently it crosses over centuries to a printing’s tradition of making accessible to many what is owned by the few – i.e. printing’s democratic strength and its interpretative force. That tradition famously includes Marcantonio Raimondi (c. 1480 – c. 1534),  an Italian engraver,  whose body of work consists mainly of prints copying paintings. He is therefore a key figure in the rise of the reproductive print. (Note the similarity between female figure in the right  hand group and Manet Dejeuner, 1863)

Marcantonio Raimondi after Raphael’s Judgement of Paris. Courtesy of the Metropolitan Museum of Art online

Liversidge departs from Raimondi’s tradition by making  prints of prints in a scale expected for paintings, subliminally shifting them from multiples to originals. Moreover, he replaces a “little art” (see William Morris)  of a glove maker by canonic high art   carving in white  Carrara marble. The glove is now a precious object, an original,  on the floor under each Liversidge’s print. The salient point is that it has been taken  out of its “useful” status  and made into  a doppelganger to the printed gloves in Klinger’s prints.

Yet, it all starts with a  simple typed intention:

This   A4  proposal hangs at the entrance to the installation at the Tall Gallery at MAC – somewhat  more legible that here. It describes the exhibits in simple terms achieving mighty ambiguity. So little to imprison our imagination.  What the panelled room ought to look like?

Are Klinger’s prints on the wall of the “guessed” room , originals or facsimile? (They are slightly altered facsimile).  Are Liversidge’s prints originals as in painting or originals as in printing? Since  I have not seen the usual numbering of prints  I fall for the first interpretation.

It is a play between perception, imagination, dreaming while awake, picking up clues that leave nowhere else just back to the image and your own preferences.  A reason to celebrate such generous offer. This sinuous returning rhymes with Nietzsche’s idea of recurring, of centres popping up anywhere you are. And yes, Liversidge leaves us on our own, like the Cupid in the last print. The arrows cast aside, the glove oversized and as if dead, cannot manage even a whisper towards the listening rosebuds.