They called it INTER-BEING, durational performances.

Here, on the steps, ascending, Dorothea Serror carries a silver head box, and,  Linda Montano holds a  silver bucket  before descending and getting out of the building, to light a fire of sorts.

Here she sits as another visitor, before or after she interacts with others. 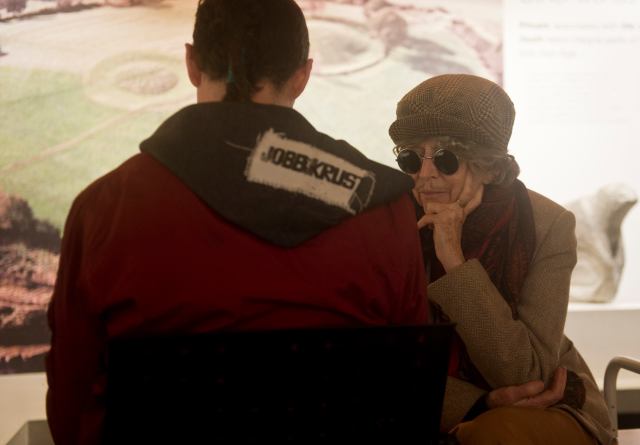 She is both ordinary and not so ordinary – melting  into a visitor who does not look at the museum installations  anymore, as if  tired of the multitude of art.  The slight gesture  of both hands issues   an authority  sign for difference and control.  She is not a consumer, she is a producer by the virtue of that difference.  Keeping performance art only a hair thickness away from ordinary behaviour,  of expected  being, demands other skills.  I regret to have missed  those phases of her work on Saturday.

Alastair MacLennan grounded his art in the rhythm as slow as he could bear, while distancing from that monotony by introduction and manipulation of objects. Walking barefoot, his boot was free to become a container , a vase – no vase ,  for a fragile white rose.

Deliberate distancing from the poetic nature introduces incongruence,  established as a strategy in  visual art a century ago by the Dadaists and Surrealists.  Thankfully, every time, it brings the fresh touch to a recalled similarity. This is a vital nonsense, it intensifies dislocation of the walking man from purposeful walk in a museum.

MacLennan sometimes introduces a clown as his alter ego, as if wishing not to look like a shaman figure.  Here he has a black lense over as if over a wounded   eye – allowing that the viewer sees through the pretense and  simultaneously, inviting the viewer’s choice how to interpret that detail.

I addition to the objects he holds here, MacLennan included a bronze legs of a bird in a splendid isolation of any context. Yet, it becomes entangled in the rest by the virtue of being there.

The multicolour ribbons do not appear often in his work – he preferring the heavy largo to dancing allegro any time.  Even here, the lightness of the colours is disabled by binding them to a dead, dry, lifeless branch.

If he meant the colours to work as symbols, I am glad that when I watched him, he failed to succeed.  They evoked an association of maypole – like a passing breath, quickly gone.

Looking down towards small mezzanine – shaped like a box  that lost its lid – Sandra Johnston  sits at a glass top table.

This is the second sitting down performance I witness.  Both elaborate a paradox between destruction and making.

In this case, a cap is dismembered and left on the floor in utter  isolation.

Crockery is being deprived of its decoration by coarse sandpaper biting into the colours until they are no more. 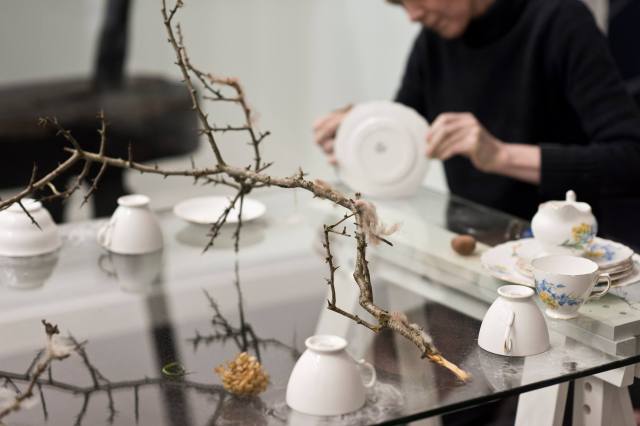 Broken of a hawthorn, overwintering  branches are condemned to sleep forever now in a thorny arabesque of absent, but visually implied,  if not torture, then tension.  The monotony of erasing the pattern from the china’s surface – while on purpose –  does not maintain a convincing sense of relevancy.  Unless, to revive A Loos’s dictum that ornament is a crime – is the central raison d’etre of this performance. I doubt it, but do not rule it out. Nevertheless,  its tender indifference to  dominant impact, comes out as its strength – free thought.

To get it there, she makes a nest of them first on the floor of the foyer, and then puts them on, one by one, to take them up stairs.

Up there she takes the item off, ties the rope to it, and sends it down as far as the rope goes.

She uses a lift.

She climbs the stairs, never taking off that silver box worn over her head.

What such a freewheeling performance offers? Does it have to offer anything? The idea that art  has to “do” something beyond being art , keeps popping up again and again in all its irrelevance. This performance is easily converted into a comment on consumerism –  but I resist that – allowing myself freewheeling perceptions of colours, shapes, details, the artist’s youthful energy and obedience to some simple plan, and letting my imagination just touch and go.

Dominic Thorpe  complicates my  playing with what I see by drowning his performance in semi- darkness.  Impaired, my eyes give rein to tactile and sound perceptions.  It works. I hear the table creaking in response to Thorpe’s steps  – he moves around his own axis.

His hands produce a  sound  too – screeching metal on stone in his palm.  He emailed me later, saying that he sharpened a spoon destined to dig.

Should I feel empathy with the table?   My memory of  earlier Thorpe’s performance wrestled for attention. Repetitive labour, repetitive life, repetitive being. As if  a  visual translation of the myth of Sysiphos  from classical Greece into  contemporary Belfast  was worth having.  Maybe, I missed the moment, Albert Camus described, as the moment of happiness.  It was a durational performance, all were.

What if the protagonist is prepared to die rather than lie? Camus dealt with that in the Etranger, recently translated as The Outsider.  All these performances were “outsiders”, “strange” to  various degree and intensity.  One, the next one,   stayed committed to the cutouts of history.

Brian Connolly  disabled his eyes by attaching cardboard tubes that hold a role of toilet paper,  in front of each lense of his glasses, destiny of impaired vision. 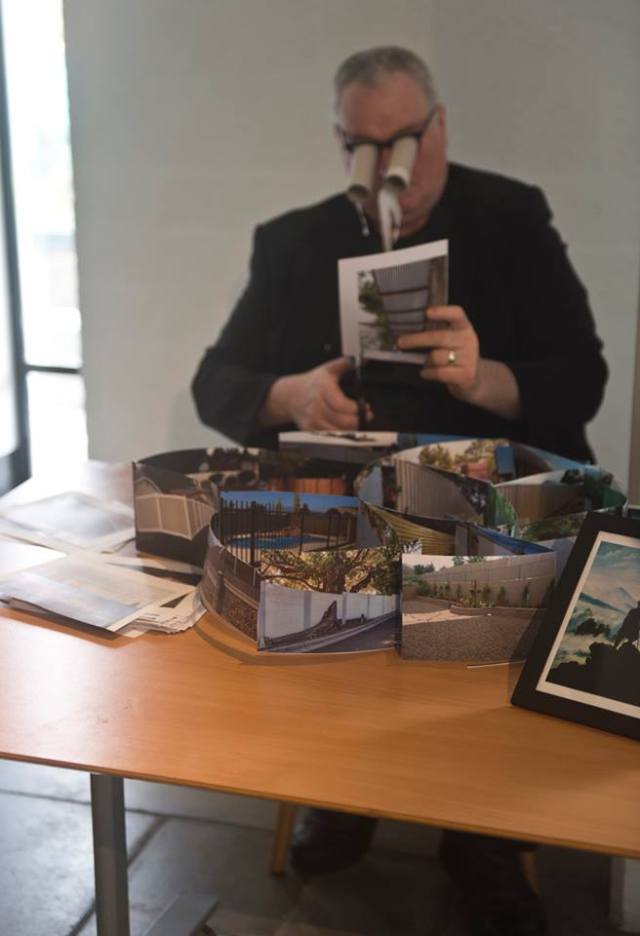 Yet, the disciplined hand cut  confidently straight lines from a set of images.  Some connected to the museum installation  of The Troubles.  Watching the display was the time necessary to unwind the toilet paper from the role, to free the tube, to make it functional for the main part of the performance.

The pathway was left as and where the paper fell.  As if freeing the tube was done just by the way and as if  watching the video was the important action.   The main part of the performance, the subsequent part, proved this meaning erroneous. The shift from what is true or not continues throughout this work.  The cut outs forge the kind of oasis, walls around empty space, incapable of any answer to any question.

The move from the serious museum display to the  construction of paper  thin walls  as enclosures around empty spaces, no entrances or exits, no roofs for protection  – kafkaesque  habitat, void of life.  Void of  a chance to move on.

The play with disabled  vision is pertinent –  think of Breughel’s painting on that theme – it brings irony inside a take on history that undermines the received view.

The event was organised under the title Inter-being.  Not a helpful choice.