The framed image was taking on my phone, which quickly led me to film the scene. I wanted to use the image to implicate further myself in the scene. The image was printed out Black & white and manipulated by hand instead of digitally. (Martin Boyle email to me)

The gallery 2  has focused on visibility and otherness – both courtesy of lens and light. Canto 28 comes to mind, when Beatrice tells Dante: ….”delight in the measure of depth to which their sight can penetrate the truth… From this it may be seen, beatitude itself is based on the act of seeing.”

Not only the poetry of the real is evoked, it is made to be tangible, present, testable. Sitting on the bench and watching the image of trees while sensing the leaves on the floor all in the unisono golden  light  is a direct encounter with the lived reality, which Martin  Boyle photographed in Japan.  He has emailed me his notes on this:

Video footage captured on a busy walk-way in Tokyo, Japan. In this footage continuous passers-by stop in their tracks to capture the beauty of the autumn leaves using their camera phones, before quick moving on again. The peacefulness of the scene is disrupted by people quickly shuffling past, forcing the camera to constantly refocus on the trees.The fabric of the curtain was selected for the title ‘Sun Yellow’ as a lead into the installation. The leaves were individually preserved this autumn by replacing the water with a glycerin solution, so they will potentially last forever. I left the cardboard box in which they where stored as part of the installation as an admission to the staged installation I was placing the viewer in.

The framed image was taking on my phone, which quickly led me to film the scene. I wanted to use the image to implicate further myself in the scene. The image was printed out Black & white and manipulated by hand instead of digitally.

Even in his direct prosaic statement  Martin Boyle  presents  “beauty of the autumn leaves” “peacefulness of  the scene” as values in themselves.   The  moving people (the seeing Others)  disrupt the camera’s “seeing” and   Boyle needs  “to constantly re-focus on the trees”.  The artist takes on a responsibility described by Nietzsche as “repairing the world”.The viewing of the trees is shareable. The large projection of the video imitates that condition.  The actual leaves on the floor stimulate the association with touch, and the sitting bench with refocusing on the trees. In that sense the installation approximates the act of seeing  present at the birth of this art, and stands as a correspondence to that truth (in the meaning given to correspondence theory by Charles Baudelaire).

Installations, like television or Performance Art, approach the boundaries between art and practical life as soluble. Where television blends the public and private  as a choice of the viewing subject, the other two approach that crossover from an opposite direction  and from an ambiguous and unstable situation. The  choice to see it or not is the same as with the on and off button on the TV – so  what do I mean by ambiguity and instability of the situation?  On the phenomenological level the placement of the objects is stable, we recognise what is what and where in the darkened space it is.  It is the very placement, however, that together with the  medium of moving image  allows my seeing to overlap with a previous view or directed glance.  This element is familiar from practical life, while introducing instability of the art object  as I  cannot see all at once, or at least together, with allowing something to disappear from my field of vision.  Yes, it is temporary – but it is. The element of disappearance makes the art object temporarily volatile. In other words; this art is akin an investigation of possibilities. Consequently, it is capable of assuming different meaning.   For me – it was a glory of trees, of their long life and self-sufficient way of being.  While they cannot move – they grow tall and become visible from another place.  Abandoned,   like a dreamy appearance, they stand   in a glorious dignity of being.  Once seen they cannot be ignored. I think of this as shared by the universe. Boyle’s manipulation of the lens based material  is a trusted tool to let the images emanate  beauty and peacefulness ( a chain reaction?).

The role of placement similar format in a row or pyramid – will inspire similar reading of one part while almost forgetting another.  If thought of as a sequence it is like reading the words on a page. It is not like that.  Shifting the focus from one image to another cannot be held by the functional sentence perspective. Within visual neighbourhoods this is disabled. Especially if the format is the same.  Curiosity  drives the seeing to focus on differences.In the narrower part of the gallery, in the so called Back Space,  Boyle appropriated “Other people’s images adopted from Gumtree, a popular online classifieds website” 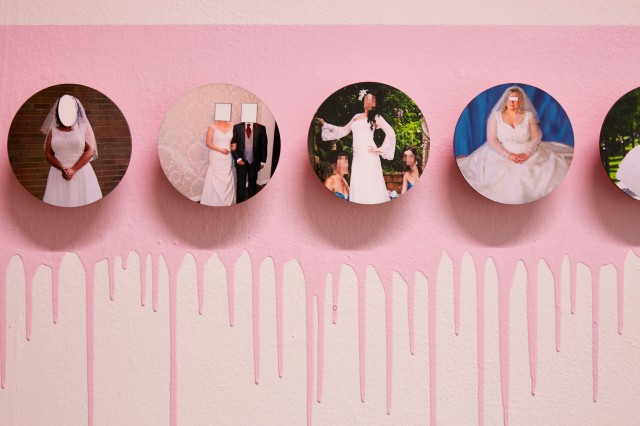 A series of images in which people sell their wedding dresses by using personal photographs of their special day to illustrate and up-sell the items. Only worn once being the most frequent description of the items condition. 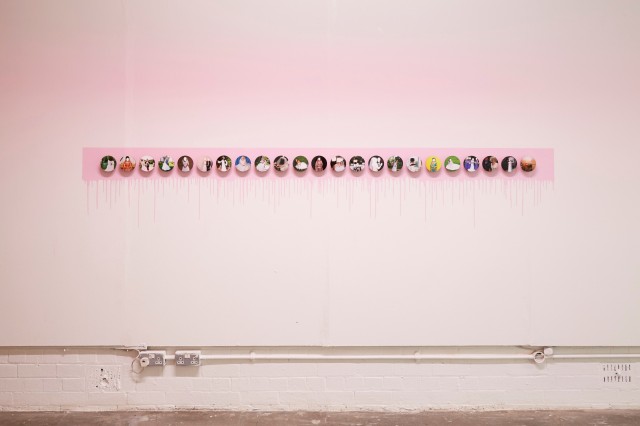 In the photos selected people have blurred, pixilated, or covered their faces taking on a more unsettling undertone. The once picturesque photographs reveal intimate moments while absurdly concealing the identity of the individuals, a similar technique used in escort adverts. The images play on the line between objective and subjective, familiar and unfamiliar.

The artworks were printed onto circular coasters. Lazer cut round hardboard coasters with a cork back, attached to mounts. When installed the images float out from the wall, with the background wall painted a colour panel of Sweet Pink.

The tub of paint bought from a charity shop was picked to respond to the similar type of place these images have been found. I felt the colour & title worked with the nature of the images. I have been collecting these ‘mistake’ paints recently (full tubs of paints donated to charity shops, and for whatever reason, had never been used).

Boyle commented: Over 500 images collected online of people selling their Chandeliers, The seller hands is seen holding up the fixtures in the images. The bad quality images pixilate in a similar way a chandelier reflects light. 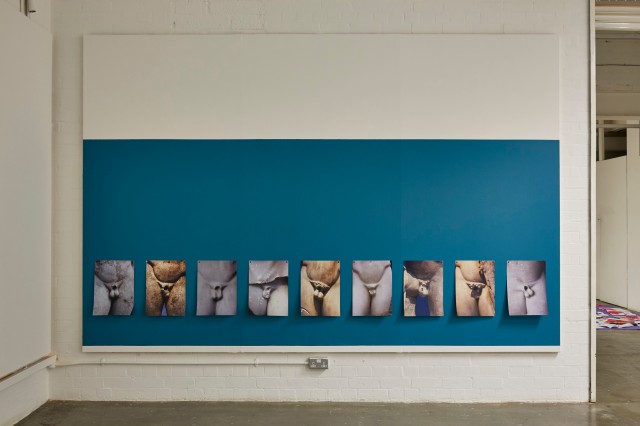 Photographed in the Ny Carlsberg Glyptotek in Copenhagen, a Museum focusing on antique sculpture from ancient cultures.

These photographs capture the crotch area of marble male nudes which have been damaged by periodic censorship; when display of genitalia was seen as immoral. In an effort to remove the modest marble penis, orifice’s have been created in place. I was struck by how provocative these sculptures appeared in comparison to the statues were the genitals remained intact. I became interested in how the altered statues could be read in a modern day context, drawing parallels between societal and cultural stigma of intersex and transgender people; how hung up we get over human genitalia.  The violent act of the chisel being inadvertently creative from the intentions, creating a super human, or evolved human being.

Around the same time I had taking these photographs I had been listening to a lot of debate on the radio about Anti-transgender bathroom hysteria. The panel of paint was intended to represent a diluted heritage colour from the museum, and also the dimensions of a typical toilet stall in a public bathroom.

Martin Boyle  cherishes the oscillation of private and public spheres  and lets it continue in a somewhat humorous take on a found object: toilet rolls ready for the distribution by the appropriate staff. 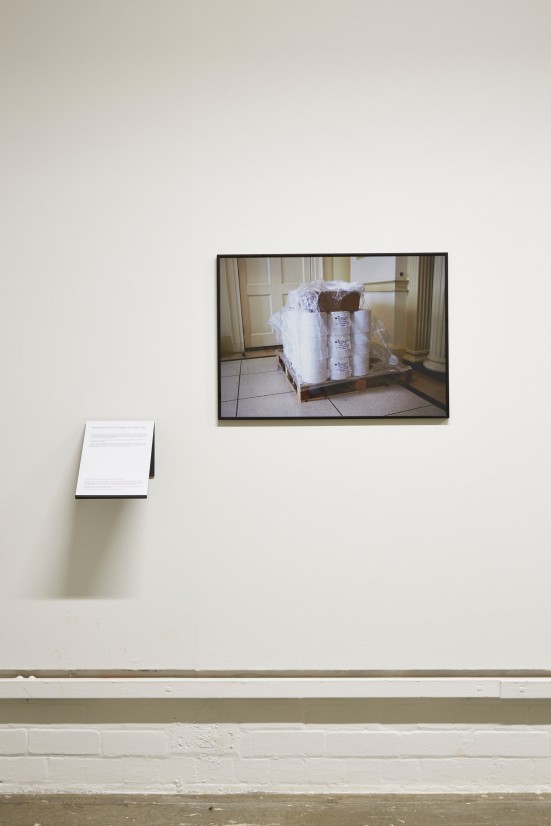 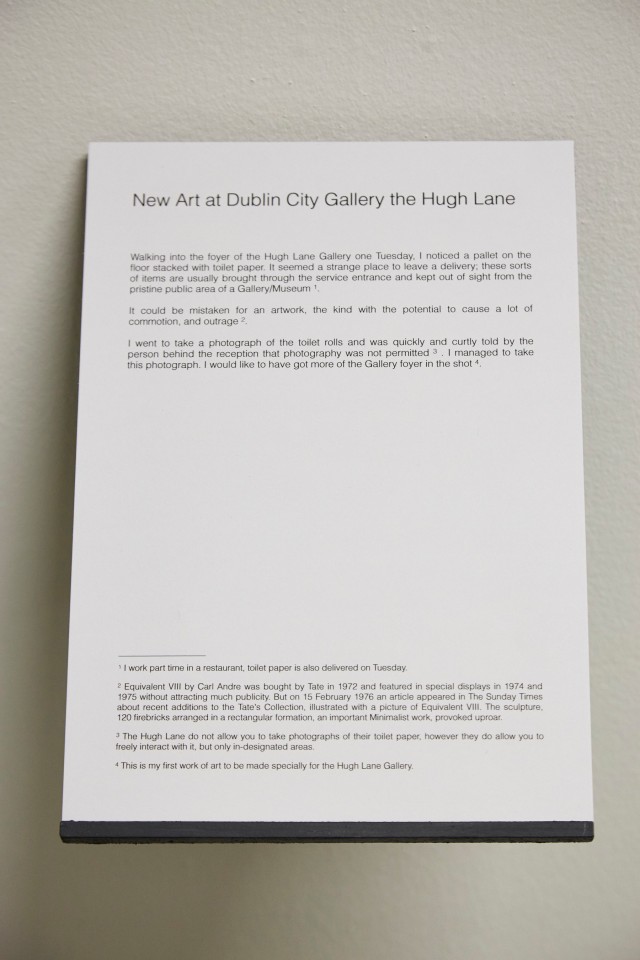 Appropriation thus flows throughout this exhibition as a benign force  pointing out where to focus – or not.  I applaud the freedom with which Martin  Boyle appropriates previous art – the heroic Modernism so intoxicated by the risk taking.  He does it with respect and generosity of spirit.  It never looks “stolen” or “destroyed”.  Boyle applies it to now and here,  responding to wherever he is when he gets the idea to make some encounter into  a work of art – thus imbuing the image with the aura of genuine interest  in it.  The serial edition of an idea also supports a positive response.

No more the dictate of fear  that whipped the talent of many to differ at all costs. Boyle can pick up a lesser art and make it feel beautiful and intriguing and nurturing imagination.

There was an object –  as if the “coda”, a dot, a sign for the end of a story – an enigma, I do not know anything about.  Its mood is stubbornly dark. On my way out  I wish to remember the colour of the sunlit trees. 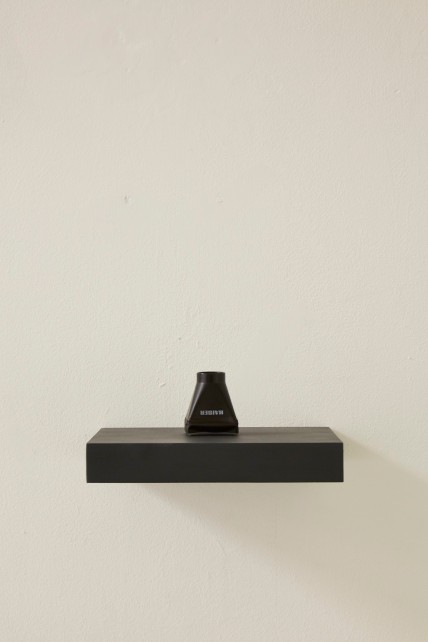 Images courtesy of GTG and the artist.