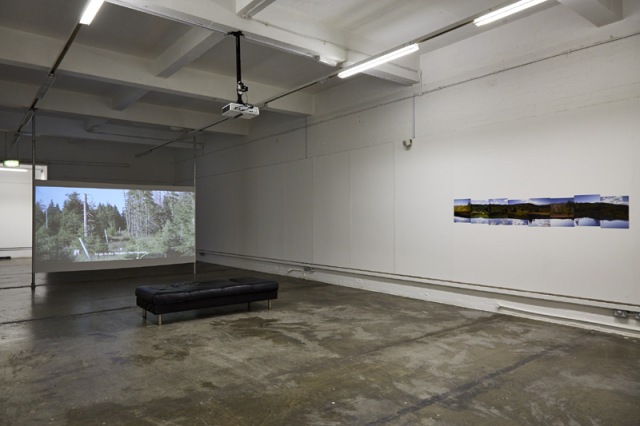 Milena Bonilla (b 1975, Bogota, Columbia) tracks a “no man land” between Germany and Czech Republic – a residuum of the Cold War  between Soviet Union and the West. Where used to be an electric fence for almost half a century, the red deer developed genetic differences and memory of the fence, treating it as  if it were still there after being removed, following the so called Velvet Revolution in 1989.  Visually – the lengthy reading of the sky while “walking  the camera” in that strip of land is unduly given dominant role.

The damning message is that human conflicts impact on innocent nature, an unwelcome and not considered “aftermath of the conflict”.

It being  communicated in words, not through medium of the video , raises question about suitability of the media, or poverty of creative insights. It appears that the intention blinded the process of translation of the knowledge and experience into the visual realm.  Not the case with still images… they win hands down… the beauty of nature is superior.

Even so, it is fits the curator’s object ( gallery handout, p1):

To the extent to which “psychological” is also  a reality – the distinction in the opening sentence is hollow.   Let us put that aside, for a while – and focus on the visible, what the exhibition makes visible.

To my great delight, the display is extraordinary in its impact on feeling free, good, and tolerant.  Those values will be precious in any conflict, or aftermath of one. They also gently define what may be perceived as ” a victory”.   The video shows the map where the electric fence divided the animal kingdom.  Shiro Masuyama redrew the map of the deer movement  on a larger scale – indicating the “memory” of the dangerous boundary, approached, but never crossed.  It works as a simile for human behaviour. Once we perceive a person as a danger –  the avoidance becomes the preferred action. 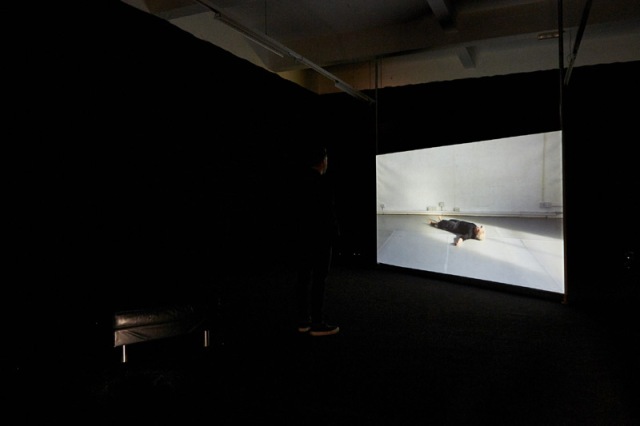 Cecily Brennan  filmed a dancer Cindy Cummings, falling repeatedly. Brennan’s instructions, I have read in the gallery  hand out,   aimed at falling freely, forgetting any learned restraint, highlighting loss of control.  The words spoken over the actions,  have not enhanced the visual perception of this viewer. 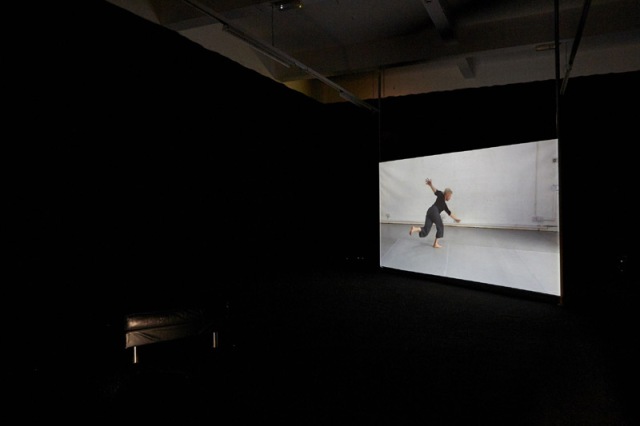 Deliberate hurt is difficult to tolerate – well, impossible.  Luckily – all throughout, I felt the dancer  could take the falls, and hard hitting the ground, in her stride. The clash between the artist’s intention  to achieve an “act of abandonment”  and the speed and willingness of the dancer to go on, insinuated a hidden, parallel,  thought: of the clash between the desire for happy  and peaceful life and the  heroic risk of injury and death in conflicts. For whatever reason.

The singularity of personal decision is limited by the inevitability of death.  That is the ultimate “short-lived” – whatever.  Subject  of the Water process  by Elvira Santamaria Torres(b 1967) 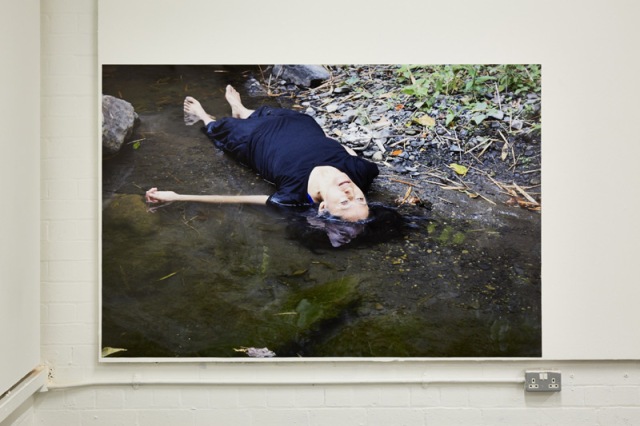 Coming out of the darkened room after watching the dancer felling and hitting ground, the next view is of the above large image on the opposite wall.  A complete opposite. Silent, the scale just under the real dimensions, forging an illusion of greater distance of the eye from the seen.  Superbly displayed to make the whole instantly understood.  And then the details are stepping up their clutter, or giving out their secret. I have not noticed the death mask where i expected the the hair flow,  until I stood nearer the surface.  The waste of it all. The diagonal composition facilitates both the flow and the stasis – unfathomable  depth and busy surface. The opposing truths do not lose their conviction, they just create a new one: that the opposition is the truth.

The narrative and emotional impact of a detail   could have fallen prey to the sensational horror  of dismembering –  instead, it softens the possible terror by not masking the living tissue, skin, foot, still moving toes…  She – life- is in control.

The display was particularly supportive of the viewer.  Airy space,  correct amount of light, well placed images, all of it  invited contemplative focusing on each, both  the fragments of nature and fragments of actions.  It gently provoked participatory aesthetic togetherness, as if evoking the precaution principle.