Posted on December 11, 2016 by Slavka Sverakova

Sinead McKeever  does not do compromises.  Her installation at the Queen Street Studios Gallery  title CIRCUIT (2016) echoed several of the perceptual tasks examined since 1960s by Michelangelo Pistoletto.

The essential characteristics Pistoletto zoomed on were listed thus: the dimension of time (not just represented, but presented in reality); the inclusion in the work of the viewer and his/her surroundings (which make “the self-portrait of the world”); the joining of couples of opposite polarity (static/dynamic, surface/depth, absolute/relative, etc.), constituted and activated by the interaction between the photographic image and what goes on in the virtual space generated by the reflecting surface; the placement of the mirror paintings no longer at window height, as paintings are traditionally hung, but on the floor (which creates a passage through which the space in which they are shown continues in the virtual space of the work, a door that opens between art and life). 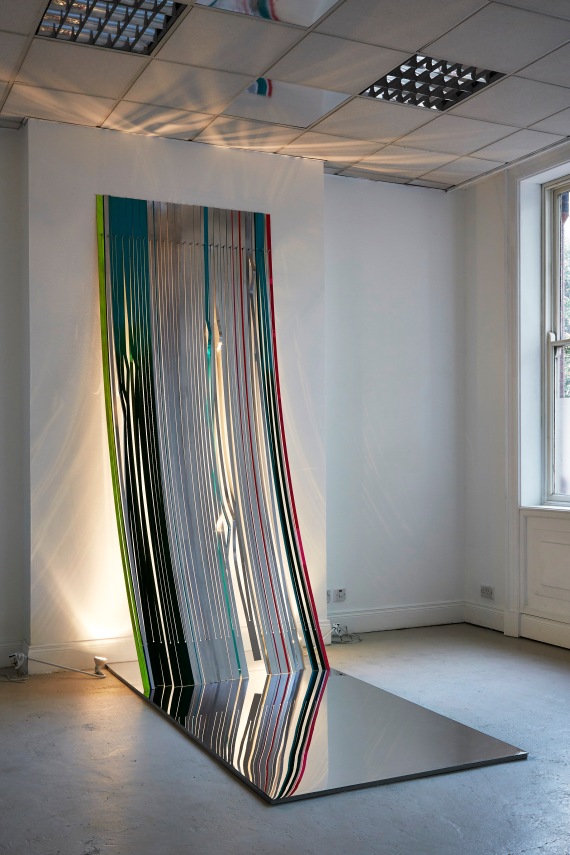 The photographs are by Simon Mills, who is increasingly preventing his lens to stay  cold and disinterested, instead directing it to harvest  complicated sights of details. McKeever’s mirror works as a divider between the ground where I stand from the ground where the multicoloured precision cut stripes  arrive at the second horizon. 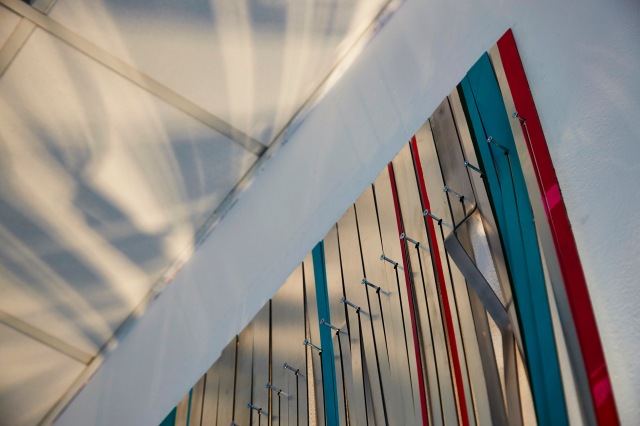 The first being the one at the top  holding them tightly together in a highly controlled order. 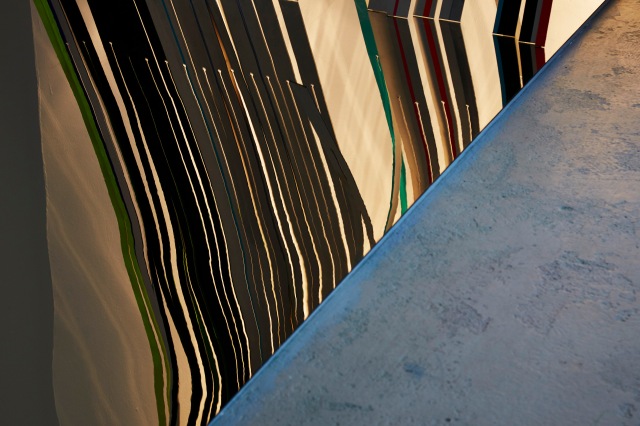 At the lower horizontal  the Apollonian principle is playfully but firmly displaced by the intoxicated Dionysian abandonment to carpe diem. 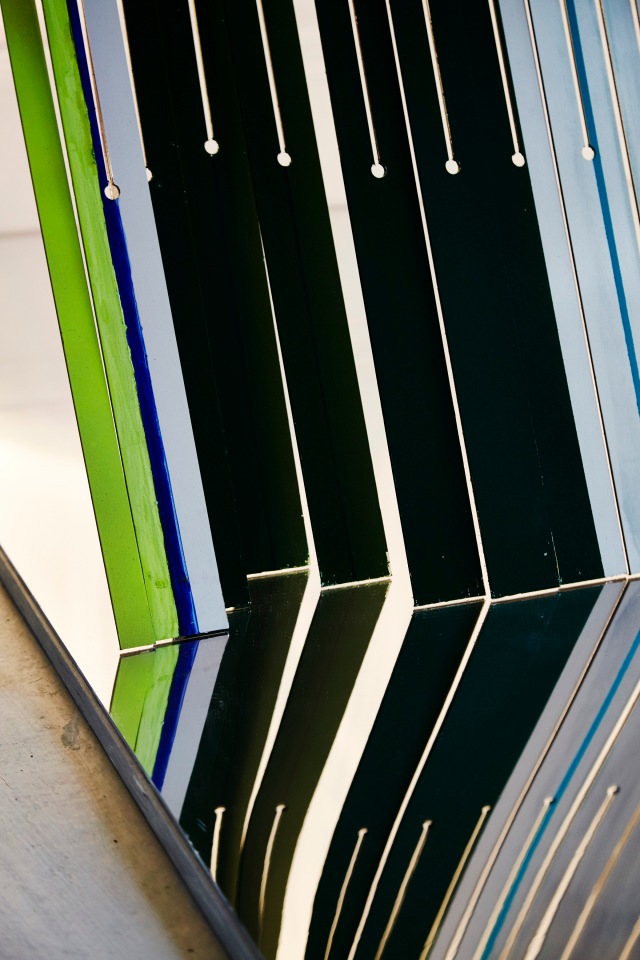 Looking back up, the strict  order reveals  wobbly parts, as if a sign of expectation of the sensual riot  lower down.  The top part has sincere respect for Modernist economy of means.

Although the reflection of the two spotlight on the ceiling and behind the colour field softly whisper that chance is deliciously seductive at times. 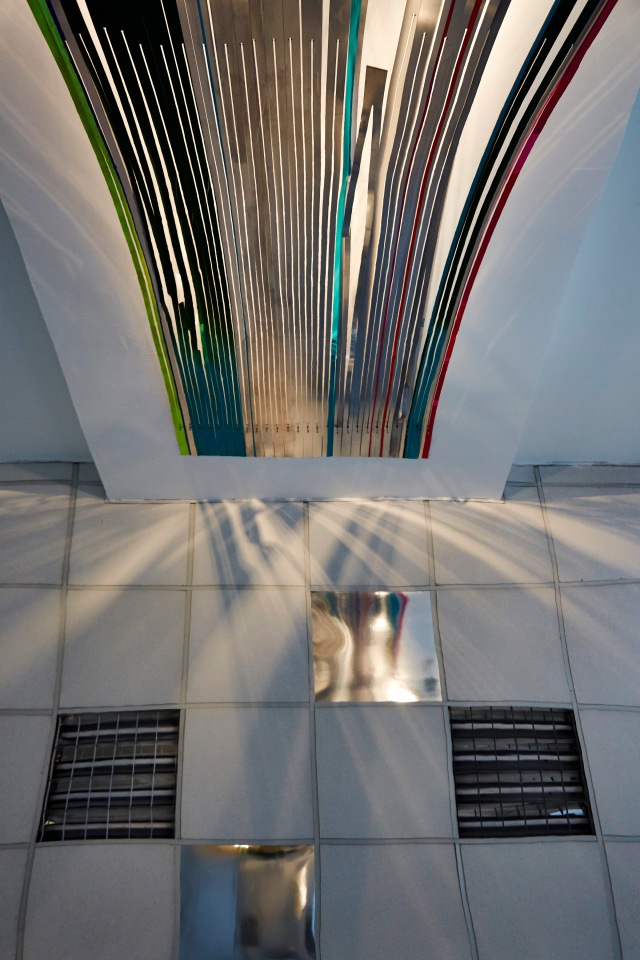 The ceiling enthusiastically accepts the chance not to hold  to its identity of closure of the space, for the bribe of two shiny squares, worn now like precious jewels.

In daylight and in darkness, this part of the installation, retains its power of a rich visible visual symposium of senses.

I am not convinced that McKeever calculated the position of this mirror so that it would take in the whole of the strips, but it thankfully does. If placed horizontally it would truncate the reflected image, associating it with some loss, or disability.  As it is, it is confident in its  almost medieval magic.  Medieval – because of association with paintings of that period, and with medieval sensitivity to power of glass to let the imagination fly away from the mundane.

The relationship of the constructed multicoloured parallel strips with the mirror, is similar to Pistoletto’s enchantment with letting the viewer  to be both inside and outside the work of art.  McKeever added a clever twist to avoid any adoration of reflected image. The mirror is large and so placed that the meaningful reflection of the height of the room  appears as deep underground space, giving an illusion of being bigger than the room where the  installation is displayed.  And it looks neither safe no comfortable – too deep to get out, and no steps or ladder to be climb up. Just pull, powerful pull to the underworld of a kind.

Another mirror leans against the opposite wall. 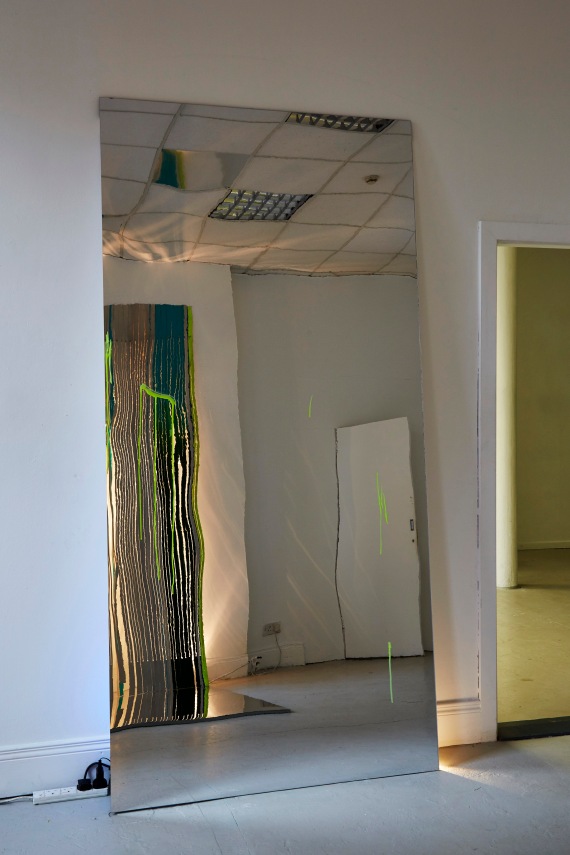 The main part is reflected  as a wobbly network  of tired hues, incapable of any clarity.  The dismantling of the clarity is enhanced by another strategy. This second mirror is positioned so, that if you stand in front of it in order to look into it, not at it sideways,  look into it, you mask out the reflection of the  main construct, and see just your figure surrounded by fragments.   McKeever added a  painted mark in high key of warm green to define this standing mirror’s surface, its position between real and reflected, truth and optical illusion.  The escape is turning away – with all the undertones of loss, like those suffered by Orpheus. 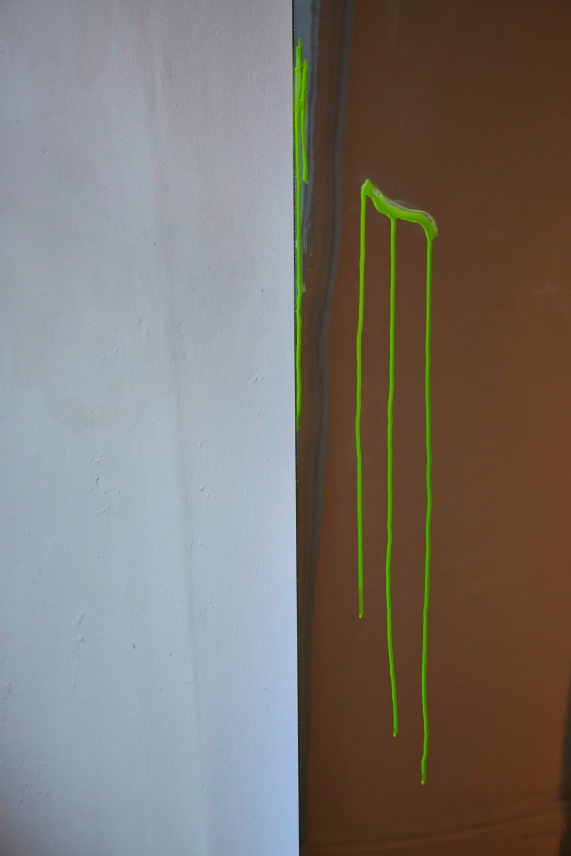 McKeever wrote generously to me about  CIRCUIT.

I used geometric diagrams, motherboards and other computer components as source materials for initial drawings. I had the drawings translated into CAD (computer-aided design) drawings. The modified designs were made into maquettes. Through experimentation and rigorous editing, I was able to concentrate on one design that would generate multiply configurations.

Working with the different industrial processes produced a flexible structure that could be adapted in- situ. The size of the sheets dictated the width and length of lines to be cut (approximately 2.5 – 3 lengths x 1.2m widths). The ribbons of dibond could only bend once; I treated the cut structure like a painting aiming for balance of composition. I liked the juxtaposition of aerosol paint and nail varnish on the surfaces because of the associations.  When the ribbons were bent the flow was interrupted and became less formal. All the surfaces I have used are reflective and create distortions to varying degrees. So there are no true reflections only approximations. Playing with the mirrored surfaces, I explored ideas around perception in the space. The viewer cannot see the installation standing in one position, without disrupting and blocking some part of the piece.

Like Pistoletto, albeit using different means, she became focused on opening the dichotomy between the real practical part of the installation the one that emanates from the installed art. Opening of it is however generous in terms of aesthetic experience. There is more of Bachelard adaptive reading of angles,  than Constructivist’s cold geometry.  More of Velazquez than Signorelli.

Soft painterly reflection confidently erases the ribbons, the angularity, to favour vapour like lie with truth  dissolved in unfathomable distance. 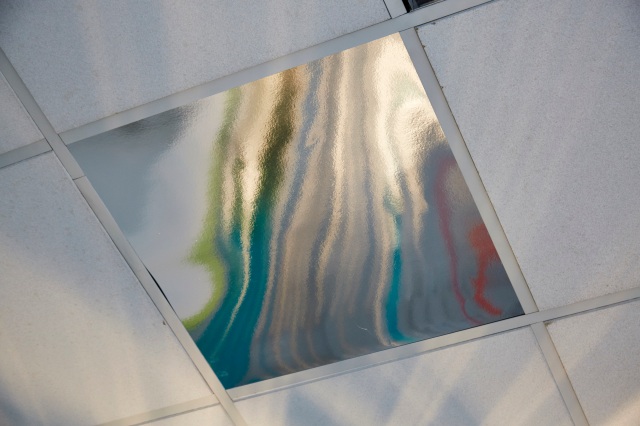 McKeever  shared her afterthoughts too. Exceptional sincerity is worth sharing – for me it stand for high level of PC  by which I mean: professional correctness. I consider it valuable also for my readers. The following italics are quotes from McKeever’s letter to me.

My thoughts when the exhibition is on.

The installation reminds me of geometry diagrams gone wrong. The wavelike interventions are reversed and doubled in the floor mirror and it reminds me of communications being interrupted and circuits that are incomplete. The different mirrors invite an immersive experience between the mirrors, I felt as if I could fall into the floor mirror. The view in the opposite mirror offers another distortion bending the straight ribbons. Two ceiling tiles reflect the work below; again there is another distortion. As mirrors are supposed to provide a true image reflection, I thought the play with the various mirrored surfaces was a good metaphor for how perception shifts.

It reminds me of the result of an enlarged paper shredder, but with a machine being shredded instead.

What processes were involved with cutting the panel into ribbons?

I made a range of line drawings and cut them out in paper and card. It was pretty straightforward at this stage, as I could tell if the conversion of the diagram into a 3D object worked successfully. After a process of elimination I settled on 4 variations, these were translated into CAD drawings. At this stage I decided to concentrate on one design. I wasn’t sure if the drawings would scale up the way I thought they might.

After many conversations we decided on the best way to cut the dibond was by using a router.

This was a learning process and it was experimental. The holes drilled in the dibond serve to prevent tears in the aluminum composite and also for potential hanging purposes.

Previously when I had used dibond for artworks, I had cut the pieces myself with a Stanley knife. This time there were too many cuts for me to do by hand (52 cuts in one panel).

When the panel was cut into strips, it was delivered to the gallery.

What about painting it?

Some of the technical drawings I had made reminded me of the printed circuit boards from the inside of a computer. So I used colours associated with computers and digital technology. The panel was painted in situ on the milled aluminum surface and sides. I used aerosol paint, markers and nail varnish.

How to apply the paint?

I used two techniques, first marking out lines with tape and spray-painting them. Secondly I painted bands of colour using markers. I also used nail varnish for its quality and its reference to personal touch.

The underside of the panel would remain untouched, as it was mirror.

My studio is great for initial ideas and working out the necessary planning stages. I knew the dibond piece would be cut off-site and I had arranged for the piece to be delivered to the gallery. Having all the separate components in the gallery space made it easier to visual outcomes. I experimented with the mirrors in different positions in the gallery. By responding to the architecture and natural light in the room, I could see where in the gallery the piece worked best.

On entering Gallery 2, the vertical structure hangs on the opposite wall. A horizontal line of aluminum screws, placed 55cms below the ceiling, holds the routered sheet of dibond in place. The panel has been cut into strips forming a continuous concertina arrangement. The dibond panel has two different finishes, a milled aluminum surface and a mirrored finish. The mirrored side of the dibond panel faces the wall causing the light to be reflected onto the ceiling and extends out to the rest of the wall.

On the milled surface, a few select ribbons are painted in colours associated with the various components within computers eg:(Chrome/solder, Green, Sparkfun Red, Arduino Blue /printed circuit board Cyan, Magenta, Yellow/inkjet printing). A selection of graffiti/skateboard spray paints, markers and nail varnish were used to create the lines in a variety of thicknesses. They are disruptions in an otherwise smooth flow of the slats curving onto a Plexiglas mirrored panel. The Plexiglas mirrored panel has been positioned lengthwise on the floor.

The piece is backlit with halogen spotlights that glow in warm white tones.

A second Plexiglas mirror panel leans against the opposite wall, about 16cms out from the wall at the base. This mirrored panel reflects and distorts the ribboned dibond structure. Yellow fluorescent paint is dripped onto the surface partly to obscure its previous history of scuff markings. I thought it might add another layer of distortion with the distorted image of the ribboned dibond in the background. The plexi-glass mirror is backlit with a blue LED light on the left and a white LED light on the right hand side.

The silver foiled ceiling tiles have replaced the standard ceiling tiles; they reflect a distorted version of the structure below.

I sincerely thank  to the artist for providing the substantial information and to Simon Mills  for photography. 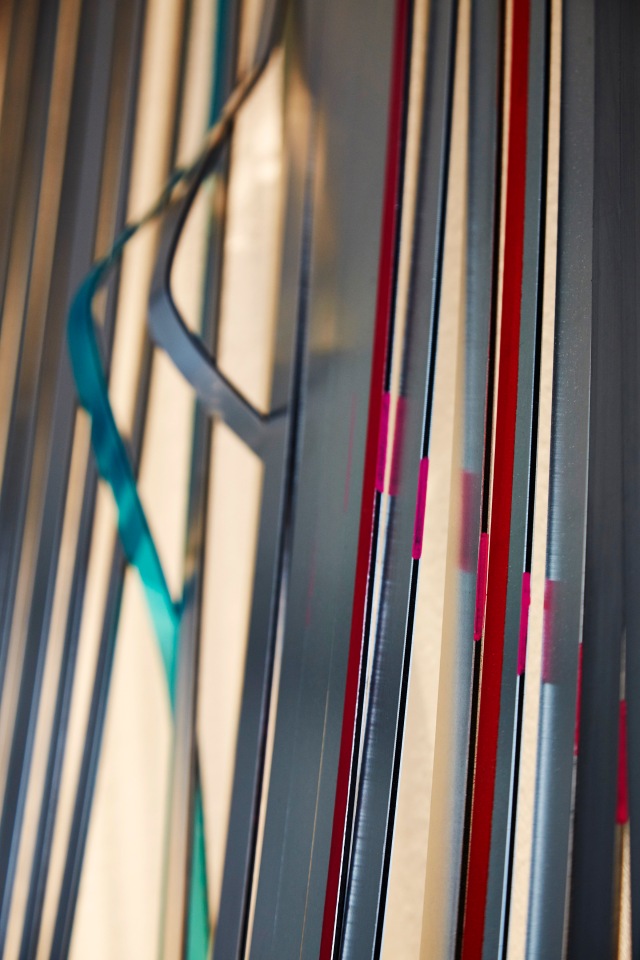 writer on art
View all posts by Slavka Sverakova →
This entry was posted in Uncategorized. Bookmark the permalink.