Posted on January 3, 2017 by Slavka Sverakova 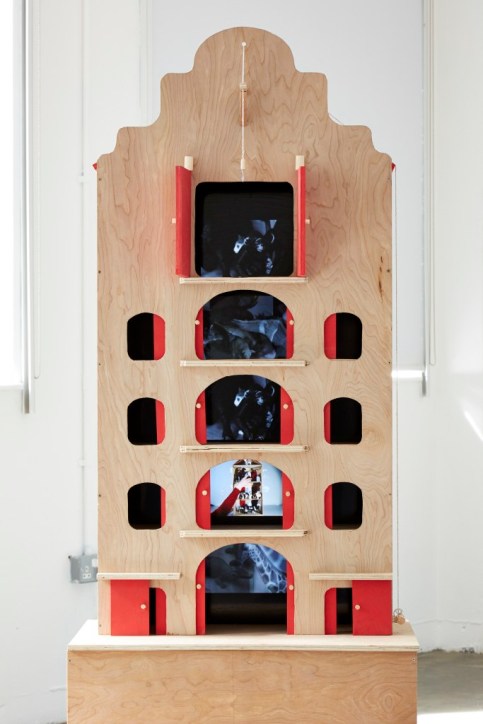 And yes, it has taken me this long to  write this essay about it.

Click on  grubberguide to see the sketch for the main exhibit  and the artist’s valuable notes.

There were four items exhibited:

on the left of the entrance two video items –   delivered at high professional standard.

In the one on the left,  Finnegan appears as ventriloquist  with a toy named Oscar, having a sophisticated debate. The one on the right contains instruction in Dutch for the animal’s migration.(see Finnegan notes on Second floor and below here)

At the back of the room  was a collection of the toy  animals in static poses like in a shop or a museum, or a child’s room waiting to be played with. 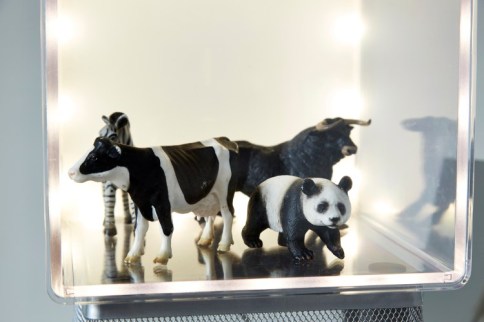 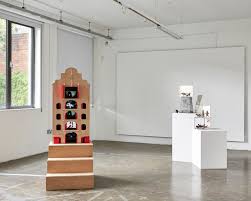 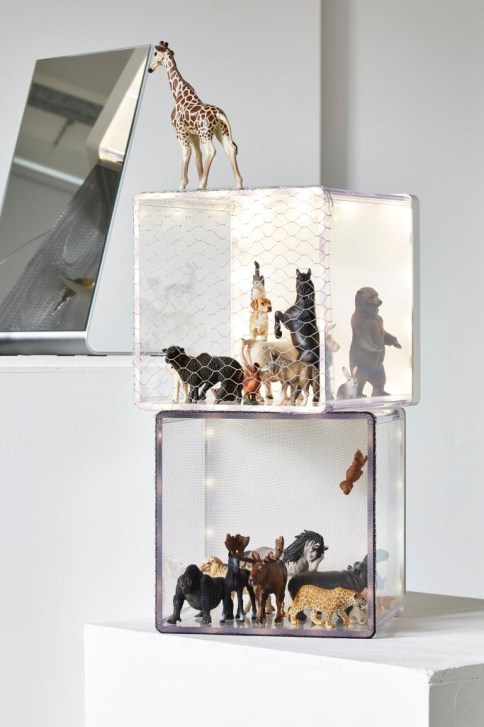 In the middle, a perfectly crafted wooden model of a Dutch warehouse ( size of an average doll house) with moving images and sound – titled Grubber. 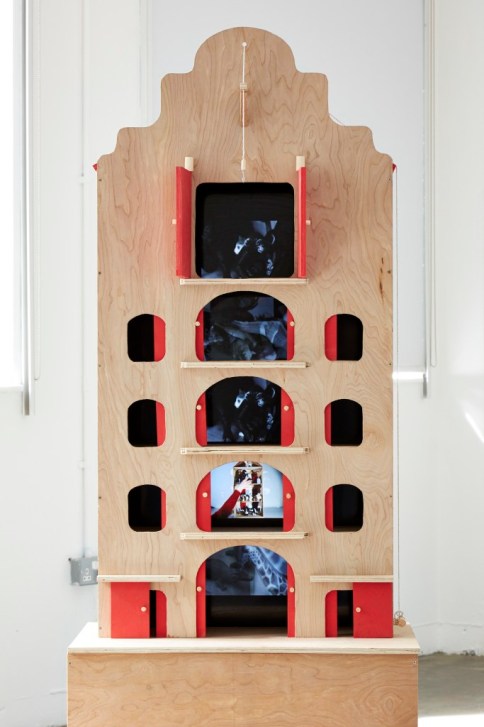 The name is apparently acknowledging a borrowing from  Dahl’s story containing a shop called Grubber. I do not know that story, which possibly puts me into a minority of the viewers, I accept that not as a limit but a normal occurrence of differences between our experiences, memories, associations and knowledge.  Those who know Dahl’s story may cast me among the benighted visitors of this exhibition. 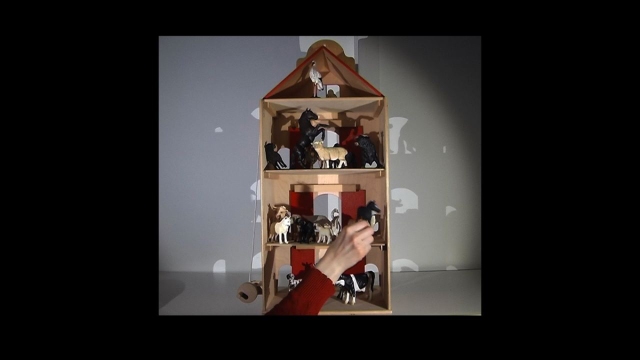 My first viewing was rushed, and disorganised… consequently, my aesthetic experience was largely governed by the appearance of the whole.  The first aesthetic impact came from the craft and attention to detail by Shiro Masayuma  who  constructed this edition of the Grubber house  for Golden Thread Gallery.    The second  impact has been  connected to  my not fully comprehending  the role of similarities to doll houses, to children play, presented here  as  art for adults. Clashing with my expectations, was my decades old belief in this artist. She delivers serious art every time.

She titled this installation Works  with animals and children.  These words present toy animals as animals and as a part of her life with children. The slippery asymmetry is  deliberate – perhaps flirting with Plato’s warning that all works of art are incomplete?  The mismatch  between producing children and making toys  is given false equivalence of slight boredom and not trying too hard to hide the artful dishevelment of thought.  She chose the title with nonchalance, whose only role must be a nod to  sprezzatura  as in Baldassare Castiglione (1528) The words of the exhibition title rely for their charm on quizzical consciousness  which meanders  around the verse of immortal Ovid promising mythic comfort:

However – on subsequent visit I found something else,  the mythical comfort of a poetic dream  in the face of unforgiving reality  is a virulent falsehood, fed by weakening of intellectual defences weakened by fear and insecurity.    What kind of Earth shall we leave to our children?

Finnegan’s  Grubber is a nuanced discourse of the visible and the audible, divided into “stories” ( in both meanings here) of the house and continuous  in its boundaries.I deliberately stick to thinking of the boundaries as a house- not a zoo, not a laboratory, not a detention centre, not even a puppet theatre, even if the shadows evoke strongly the  puppet theatre of  Java, whose cut out figures I saw for sale  at the Waterlooplein Flee Market in Amsterdam.

Huddled above is a flock of sheep. Finnegan suggests ” a sort of Nativity tableau”. It being a comforting and familiar part of folk art and high art alike , it leads to an  association away from the harsh  Carnivora to a promise of eternal peace – with a dagger of conditions set up by one mighty guarantor.  However it is also the only floor with available escape on a rope hanging from the gable.  Hope? Survival instinct?

The figures  of this Nativity scene are 60 cm tall, carved during the 1960s in Unhost, Czech republic. The position of the flock of sheep has double meaning: either they bring warmth to  protect the newborn, or they eat all the hey  making the exact opposite to happen. The idea of a Saviour and eternal life has been made visible  outside the so called high art, where art and life merge.  The flock of sheep have several roles, I single out two of them:  they re-enforce the metaphor of Christ as a Shepard of believers in  eternal life,  and they act as witness and a carer  of the newborn, making visible something intensively shared between the governed and governing.  Finnegan makes her sheep blind and frozen, she refuses to offer any promise.

On the third floor  (El Tercer Piso)  is a “ballet” of the bull and a  swan, their shadows  move to a sound of a tango.  A fiction that points to the truth has been a favourite mode  for centuries.  Two reliefs on the  Fontana Maggiore in Perugia (13th C) present a wolf and a lamb and a wolf and a crane –   as a potential instruction to mankind.  The fictitious Aesop’s fable is offered as a visible proverb.

In Phaedras, Plato has Socrates turning Aesop’s fables into verses. These fables have dual ambition: to be true to nature and useful to life.  Particularly at times when society experiences confusion, desensitisation, the art world steps in. For a  Hindu it is Panchatantra, Buddhists have Jataka Tales, and fables are found already in ancient Sumer culture. Eternal recurrence as Nietzsche predicted.

Finnegan juxtaposes superficial joviality with a threat of latent violence. The sheep observing it seems paralysed by fear? It is even less obvious – more like depiction of something that appears positive yet excudes something disturbing, like a print or a painting  by Paula Rego…  glimps of sudden consciousness of a threat  of violence without visible brutality.

So far the animals do not look at us.  There is no reciprocal viewing – something strongly present in ancient bronze from Egypt – the  cat being a deity:

Finnegan placed a duck outside the shadow dance, fully lit up.  Has she escaped or has the light alerted  her enemies?? The bull and the swan share some tender moments – while the stark contrast of black with white, of heavy and light, of charging and flying  points to conflict and  violence.

On the Second floor of Grubber – animals migrate – they seem to be forced to leave in a hurry.  Whether by a force or instinct  the hurry from one place to another. It is a similar accommodation –  betraying crashed hope of a safer  better life?  This episode feels like actual comment on current migration of people. It narrowly avoids offering judgements – but it manages it perfectly with contradictory puzzling details of a giraffe who does not enter the new home, with a vulnerable  newborn lamb being left behind etc.  The sound is a mixture of nomadic traditions performed also by Stephane Grappelli ( you may recollect him playing with Yehudi Menuhin?)

At the two lower floors Finnegan placed Strategy I and II. An anonymous boy delivers in Dutch directions for the animals where to go – it is in a code of a chess moves – which increases certainty that the instruction will be misunderstood or not understood. The theme of uncertainty and instability keeps its hold.

To the sound of blues  the Strategy II  the animation boils towards the climax and stops.

Putting animals insight a well built  home for people  is instantly polemical.  It seems that the nature that normally shelters the animals is nowhere to be seen, as if the world outside the house already ended.  The relief of being indoors slips away.  Somethings treacherous is present at every level, ultimate creepy threat is the shadow dance… the mass of stationary bodies evaporated, the eye is led to the movement of the light and shadow.

The promised shelter is overtaken by darkness of insecurity, threats and absence of hope.

This video novella has no chapters, just the mix of will and chance whispering that watching it will let you unearth some good, some future, some safety.  At its centre are questions: What well being consists of? How to do most good? What is most important? How to safeguard the future of life?

It offers but one brave answer: everything is connected to everything, sublime drenched in uncertainty is here to stay.

Emotion is thus  articulated, caught, performed and – fake.  That triggers a surreal visual play between play and lie …

…at the other end of town are the money-grubbers, and the town itself is full of …

The images  of Finnegan’s exhibition courtesy of the artist and Golden Thread Gallery.