Posted on February 15, 2017 by Slavka Sverakova 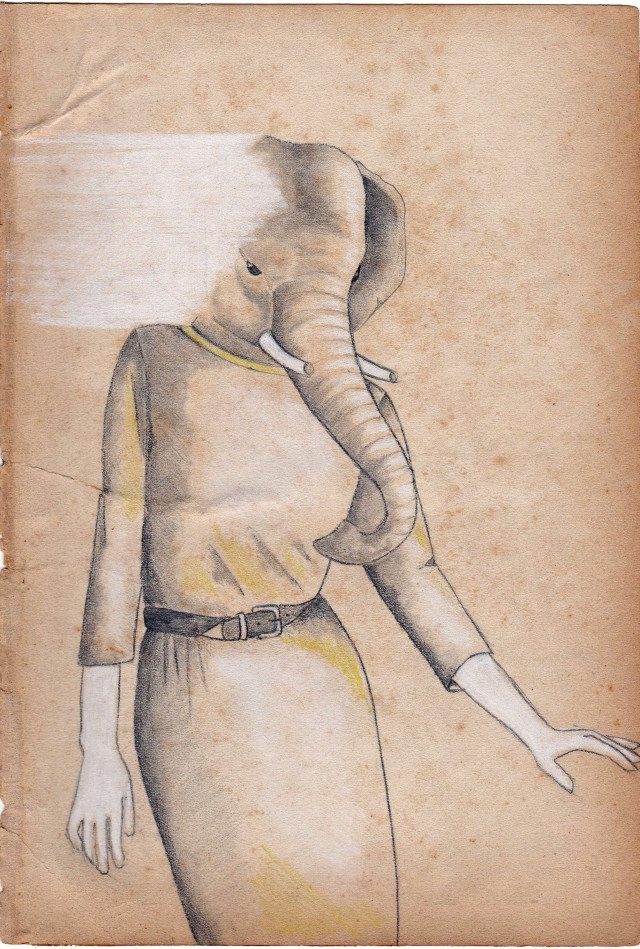 Metamorphosis of the Elephant, 2016, pencil on found paper

My work is influenced by many things; mythology, folk tales and invented stories, leaving their dark side laid bare.   It is about my life, the lives of others, and sometimes the life of no one at all. I use images of the past, feelings of the present and dreams of the future to inspire me in my art.

My current preference is to work in a small format, using mainly mixed media that can include drawing, pen and ink, painting and collage.

I enjoy the graphics and texture of old books that I use as a base for my work, each individual paper having their own textures and even smells. The text may or may not give meaning to the finished piece.  Some texts tell particular stories: others make a pattern for the overlaid image.

I have been living and working in Valencia, Spain since 1998, after graduating from the University of Ulster in Belfast!

Fenderesky displayed her drawings in the gallery upstairs. Back in Belfast, nineteen years later with 29  small pencil, pastel, mixed media on found paper. The found paper is, in majority of cases,  that spare leaf in a book usually protecting a frontispiece. An association freely flowing throughout this exhibition forges a gentle bond between bookshelves and frames, and what each holds, the verbal and the visual.   That hold is safeguarded by the sizes –  averaging  around 20 cm x 30cm.

The found paper has a history. The rusty spots are signs of age and damp, and deterioration of the paper.

Paper manufacturers have long known that acid in paper is one of the main causes of this process and alkaline papers are much more long lasting and less likely to yellow and age.( more on  https://www.loc.gov/preservation/care/deterioratebrochure.html )

The use of alum sizes in paper making was discontinued because of the acidification this treatment introduces and simply handling paper introduces lactic acid from sweat on the hands.

Gingles choice of the ground cannot be ignored, as it holds the future of  her images in ransom even before the drawing is finished. Significantly – no ransom can protect the drawing.  On one hand using found paper flirts with the ethics of re-cycling, on the other it condemns the pencil drawing to a certain demise. Placing new art in a vulnerable existence  is akin the uncertainty principle, we know it will disappear once, but do not know when, like us.  The decision to pull the rag under the drawings “eternal” existence defines its   intrinsic value, while negating that  set by an  art world/ art  market.

Another characteristics is born between an illusionist drawing of some parts of the image and  empty areas. The  resulting being and nothingness may not have Sartre’s sharpness and morality while  sharing his views on origin and destiny. A well ordered hierarchy of the visible and that which is absent  undermines itself by an anarchy of freewheeling  curiosity, what will happen if…  and what wakes up in our consciousness when meeting The Other. 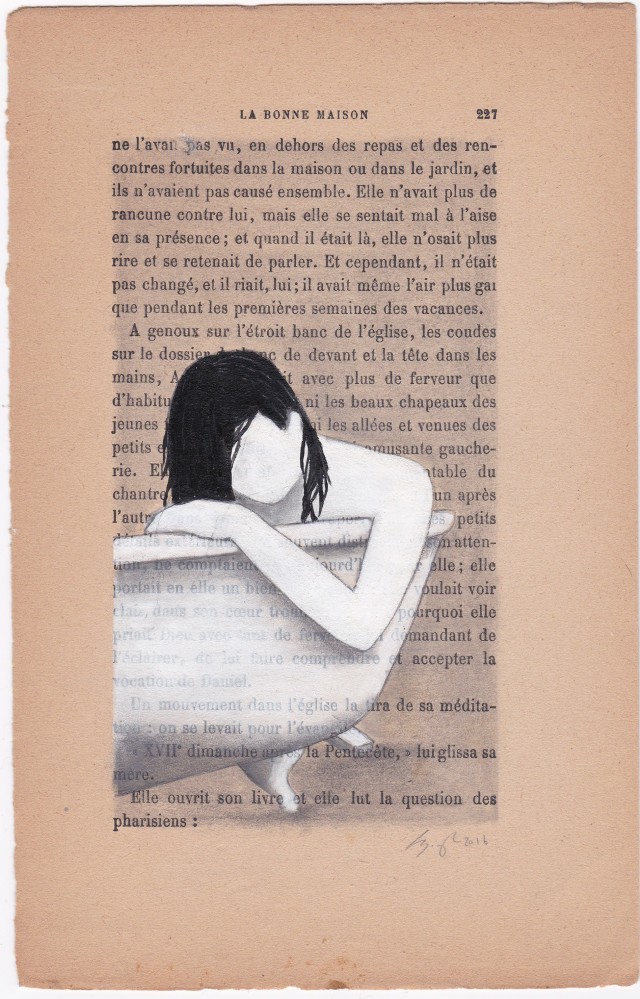 The subliminal communication of the visible renders the image as authoritative as legitimate representation of what was seen, or remembered, and  certainly lived once.  That lived reality becomes a dramatic event of fragile privacy transforming into a performative public statement. Thus negating any association with the images of Susanna and the Elders, or any citation of that story.

The one strategy that persists throughout this exhibition  is Gingles’s surefooted choice what to erase. 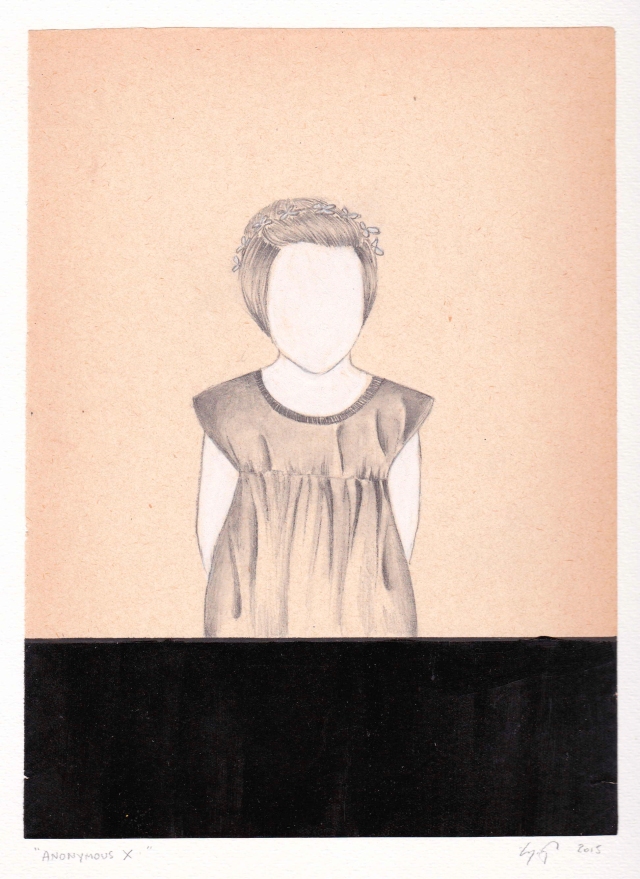 It is  an interesting coincidence, that while Gingles was in the middle of her undergraduate degree,  she could have come across  the paintings by  Gary Hume (b.  1962).  This view of his studio  illustrates both the careful observation  and abstraction forged by absence.

Sharing Hume’s  severe economy of means,   Gingles recycles the strategy and makes it her own.  Her Anonymous  has  well defined hair, dress. age and gender, while that most useful identification, the face, is invisible.  Speaking in 2011, Hume compares himself to an owl  disengaged with the Birthday balloons  caught in the trees. This disinterestedness  is a  creativity’s response to what is  given.  It is bounder-less, it is a constrain that allows the viewer’s creativity to supply what is missing, as an active response to what is given.  No escape.

The difference becomes salient when comparing Hume with Gingles representation of the sensation to see what is not there:

If anything is indicative of danger, it is the duo of yellow and black, outside the body.  The younger artist evokes surrealism  ( Max Ernst in particular)  to insert the  “sensation of the visible” inside the figure: 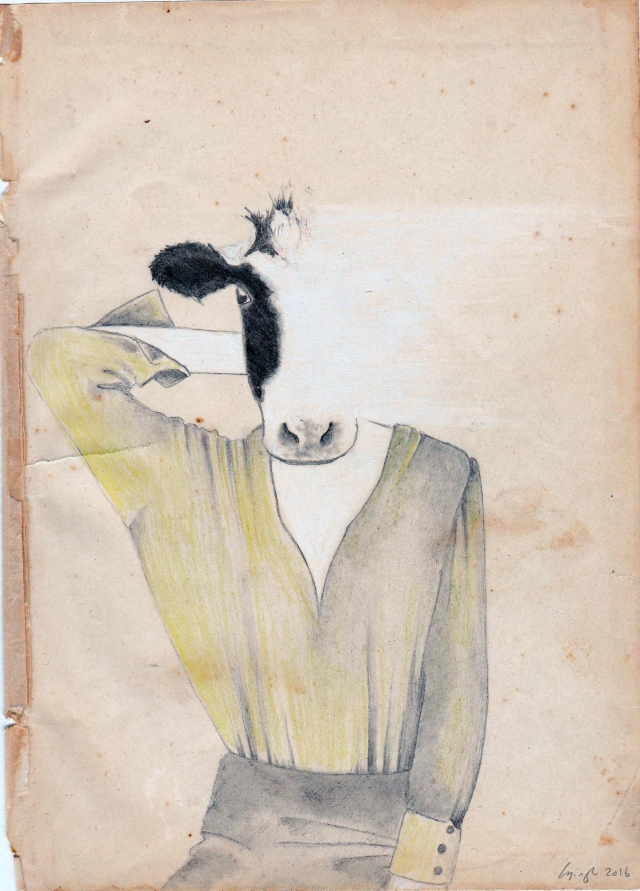 Metamorphosis of the cow, 2016, pencil on found paper.

or – with a nod to Hume comparison to a disengaged owl

Both these artists share  parallels – regardless if knowingly or not – with questions of phenomenology today.

writer on art
View all posts by Slavka Sverakova →
This entry was posted in essay, review and tagged deterioration of paper, Gary Hume, J P Sartre, Phenomenology. Bookmark the permalink.