Art objects by Anya Waterworth, Sarah Falloon, Joanne Jamison and Leanne McClean benefited from the  daylight  in the smaller rooms  of the gallery.   The windows were never far away from the surface of the small formats luxuriating in an imagined togetherness in a high key.

The variety of techniques ebulliently celebrated not so much each different powers, rather  calm confidence to keep the technical data in the magic box of secrets.  While the  being of the exhibits depended fully on how they were made,  they all submitted to the conspiracy  to keep the rest between the object and its maker.  Instead, not unlike natural forms, the sculptures and paintings/drawings/ collages  offered  to the viewer freedom, limited by the personal taste and preferences.  Their titles harbour each artist’s preference how much to determine the visual thought by  words.

Sarah Faloon trust the affirmative description of the look of her sculptures e.g.  Strider, Orange Bill, Bird, Bone Men and Class of an Eider Duck as their ID. Brief and to the point.

Seeing the Bone Men  and  Eider Duck   in relative proximity  successfully induced a feeling of a play, of animation, of story telling, as in a puppet theatre. 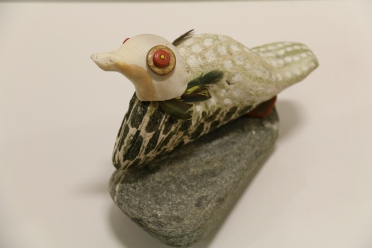 Class of an Eider Duck 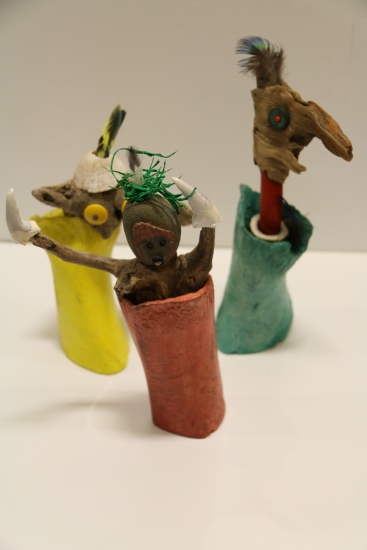 The “birds” aspire to appear as puppets too  on a remove from the anthropocentric meanings. 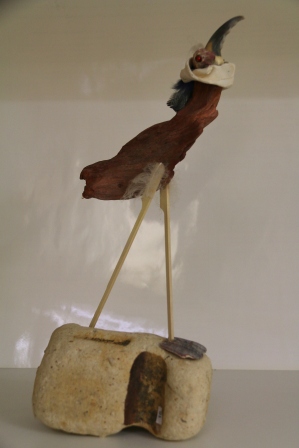 I cannot tell what was the intention and what was her response to the intention issued by the found objects.  The assemblage, however, has been guided by simile between the found and something familiar, like a bird previously seen.  Reminiscent of children’s propensity of seeing other meanings in found objects this artist favours abrasiveness that escapes the spontaneity of a child’s imagination.

While the construct looks effortlessly put together, Faloon carefully adjusts and manages the seams of incompatible parts to share  resemblance to a until then non existing bird. 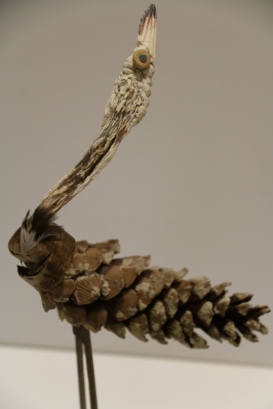 Faloon exercises her phantasy with an enviable ease and sincerity , with determination to achieve resemblances to natural forms, while preferring discarded  fragments of nature . Her assemblages  flirt with being sculptures, or ornaments or play, dipping into the grotesque, bizarre, incongruous , even jarring appearances, with one ambition:  to carry the correspondence to a natural form.  Birds, bodies. She achieves an immediate recognition grounded in sensory similarity to a priori experience.  Her art invites playful recognition -not the kind rooted in rational judgement.  She makes visible what does not exist but looks like something that does.

Leanne McClean  seeks  something indicated by one of her titles:  In Between 2 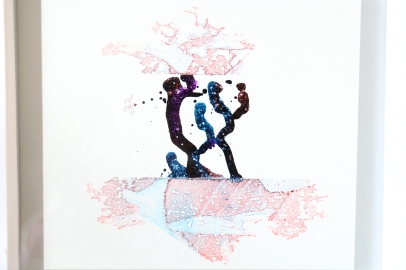 Litmus  is a dye obtained from certain lichens that is red under acid conditions and blue under alkaline conditions. It is used to determine whether a substance is acid or alkaline – a memory from grammar school chemistry classes.  This image wiggles out from its scientific roots and wrestles into the realm of abstract art. Where Faloon’s subject reached back to the concept  of air,  McClean’s subjects connect to  matter to Earth. The above painting is both a record of chemical reaction and an abstraction of standing forms  with slowly disintegrating certainty.  Their from dissipates into uneven outlines, as if the substance in between seeped into the surroundings, hesitantly but driven by some law.  The organic and no- organic are placed into a proximity that erases the living force, as in mumification. The organic mater appears comfortably unorganic, as a replacement of the real.  Approximation is the chosen pathway.

I had to look up that word.  Definition of sulcus – a groove or furrow, especially one on the surface of the brain. (https://en.oxforddictionaries.com/definition.sulcus).  While looking at the image,  I would spontaneously think of breaks, fissures, grooves, but not of grooves in brain.  Rather, it appears to me like a fossil, some unknown organisms locked in hard rock  milions of years ago.  The marks look  like imprints or debris. Not like the neurons  and synapses seen in scientific illustrations.   Maybe that’s the point – to make a generic similarity between scientific knowledge and visualisation   that  does not rule out future improved research.   Ignoring the title – opens a varieties of meaning – connected to abstraction, archeology, broken tiles,  old and new art systems.  Open ended.

Anya Waterworth   exhibited four small abstractions.  In one, collage appears under the large white gesture marks  blinding any possible depth so laboriously constructed by the black blobs.  Or ?  Starting reading from the blue lower part this flattening power of white is replaced by an illusion that it, in particular,  is far away from the picture plane. As intelligent as playful, the familiarity with optical power of hues and tones is delivered with dionysian freedom.  By intoxicated brush or pastel. 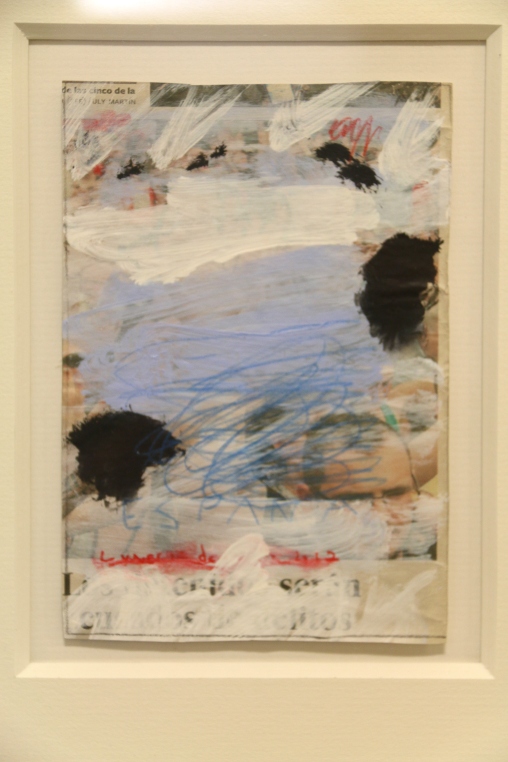 Continuing with my simile of the art’s character to one of the four classic elements of existence, this is neither Air or Earth, it is Fire.  Even the absence of heat remembers fire as ashes.  Renewing life. 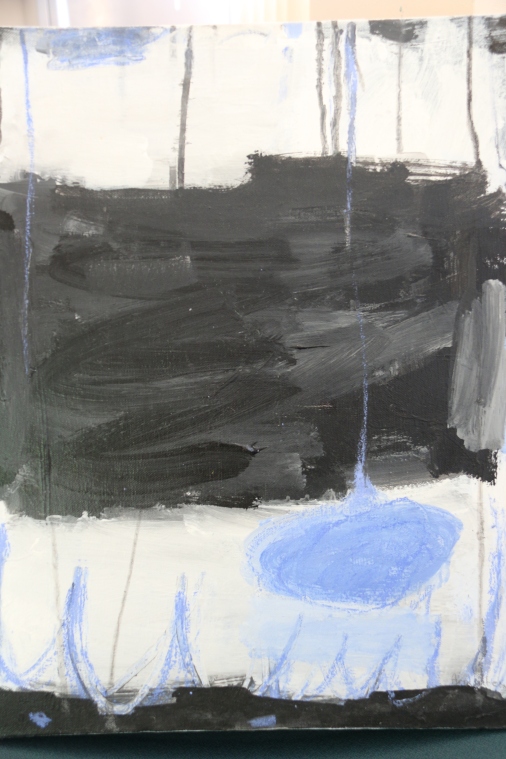 Fittingly her last image goes underground like in layers of life in deserts, or across geological  changes.

Joanne Jamison  exhibited images born out of the place she calls home. 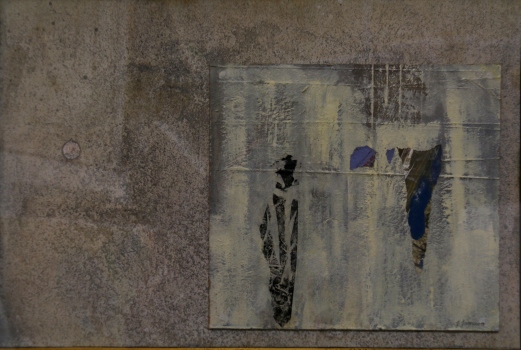 Nothing near my own experience of driving up north in the fog. When I disregard the words of the title,   the recognition of something frustrating clarity not just of a vision, but of knowing where it is, where am I in relation to it.Yet. it is not uncomfortable – only masking something, preventing me to know, to be sure.  In that sense it is an image for “human condition”. This association increases when moving to her  two images with the same title: Brave New World – Lagan.

Right angles, incised lines, horizontal and vertical co-exist in the same plane as they habitually would do on an architectural plan – but there is a sun or moon as if visible through thin clouds!  All together – it does not celebrate some “brave new word” – rather it issues doubts about the principles of those professing it.  Who are they? There may be an answer in the two images below, figure in snow and with sun. 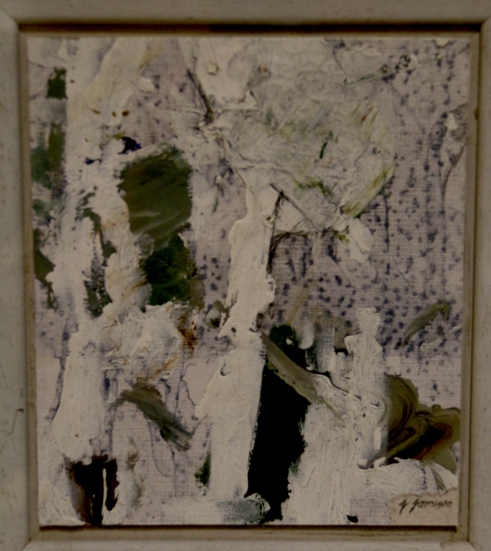 Figures in the Snow

Impossible to identify them.  A simile to how we are governed? 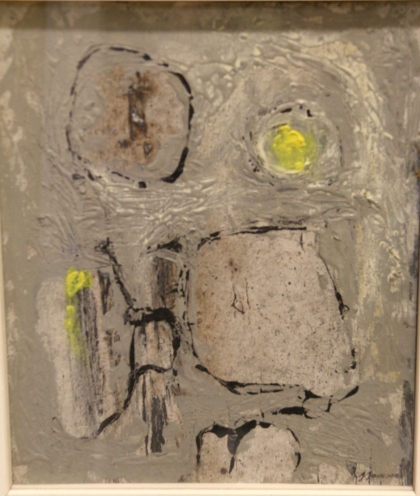 Reminiscent of some French abstraction of the 1950s -60s these two broadcast confidence into the power of absence of direct identification of perceivable forms. Invented forms  effortlessly hold energy the way the universe does.. or conserve an imprint of a collusion of nothing and something while refuting the narrative in favour of the lyrical. She is quoted that her ambition is to  portray a place and its soul. 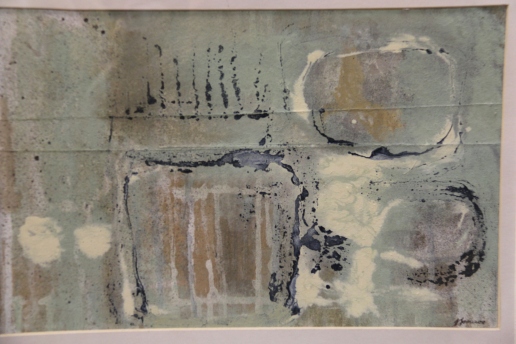 She is  a founder of Engine Room Gallery, technician, cleaner, curator et al… I have known her for decades, as strongly dedicated to contemporary artists. Her own art practice had to squeeze between that and family – I recall how her tiny twins cried while she brushed the gallery floor minutes  before an opening.  In between running the gallery with others and family life, she steadily developed two parameters  that define her practice:  abstraction  and sensuality.

Apology for not having data about all four artists and captions for their exhibits.  I let those to fade into the February past… and failed to recover them.