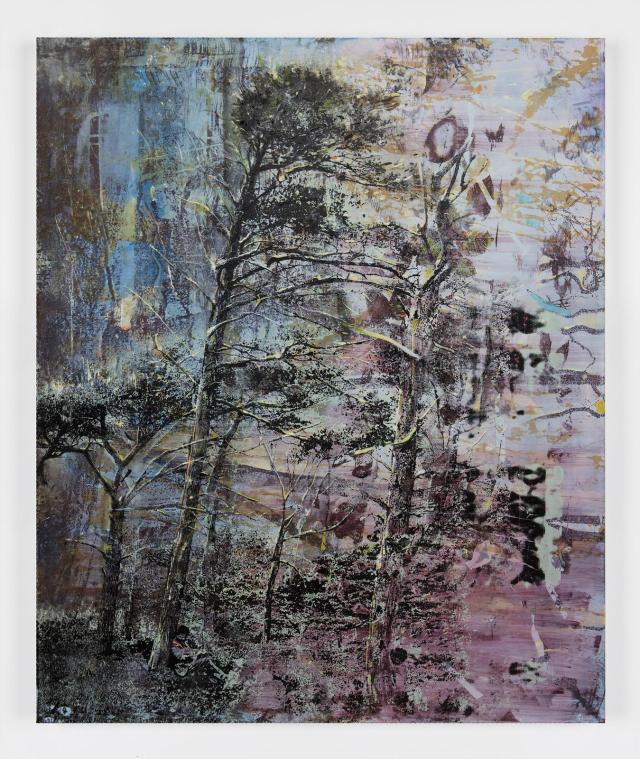 In a sight rooted practice the similarities and differences between these two  images have defining power.  They define even those images that are on their own.  These landscapes are a modern equivalent of Plato’s answer to Timaeus asking  how  the Demiurg created the universe.   Magill’s choices of mimetic subjects are heavy lifters for the armature of repertory of thoughts and associations  with roots in both observation and imagination. Italo Calvino reflected on this with the reference to Starobinski’s two modes : imagination as knowing, and as identification with the world greater than us. (Six Memos, 90). Calvino adds a proposition , revoking Giordano Bruno, that imagination is a  repertory of what is potential, what does not exists, until it might become  a part of never saturable world of  images. Magill zooms on this insecurity  of decision and choice of potential, by reviving methods favoured by  JS  Bach and  Claude Monet.  With sprinkling of  A Warhol mix of techniques.

In the Still  images she repeats the composition by changes the hues and tonality, space (depth) and light.   I found, a predecessor for the light to bear the burden of  thought in  her contribution to the exhibition  A certain Kind of Light (2002)

It is spiritual twin to the whispered  horizon in Grunewald’s Crucifixion, 1517, now in Colmar 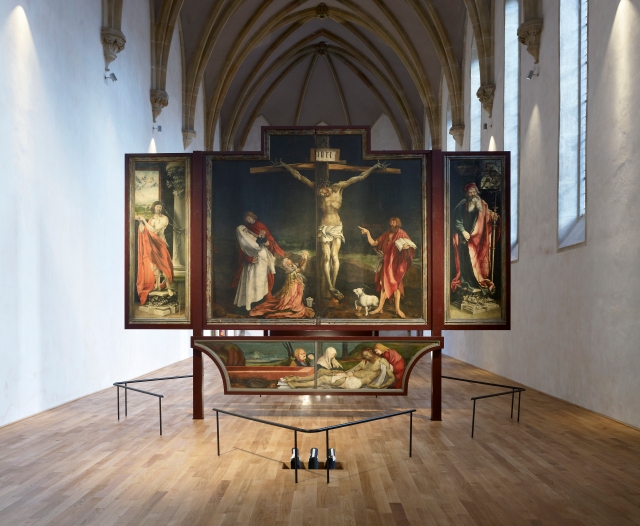 It is likely that Magill would not claim divine inspiration a la Dante  or the Danube School. A quote attributed to her opens the  way that leads to her chosen title Headland of the set of these exhibits:” … unfolding openness I try to follow…. ”

In the catalog that accompanies  Headland   also in the installation at the Ulster museum I read a passage where she aims  at painting to simulate what is going in our head when seeing landscape.

So – it is the seeing, that is her subject? I suspect it is more,  the whole chain: what I see, what the lens captures, what the print transfers, what the brush transfers, and some more in between.

While the image is predetermined in the sincere admission that it is one possible choice, the making of the painted image takes command in another direction – to the attraction of many possible choices.   Much of the decision is not grounded in what has been seen, in optical terms of memory, although that’s the armature for the composition.   It is all the rest  that defines the image: her silent reflection, play with spectrum, edge of consciousness, temptation to go on, to stop, to rest without any need, to  be unaccounted…

Her art reminds me of John O’Donoghue :”To live in a valleys  is to enjoy private sky (in Anam Cara… somewhere) . Magill extends that to water, trees …how trees smell after the rain.    Compare  her  OF   and  Red Bay (Garron Point) 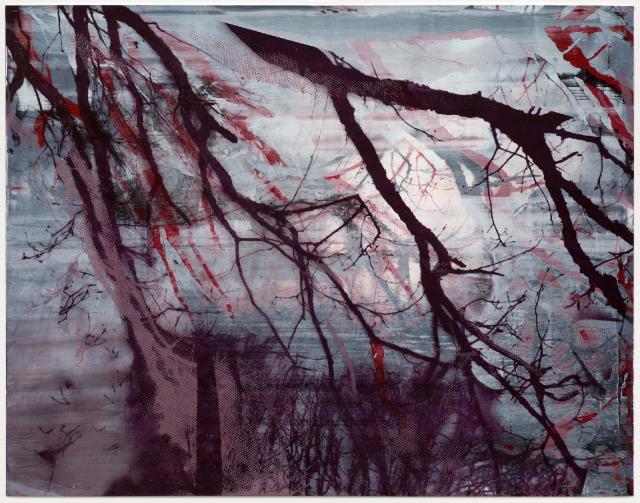 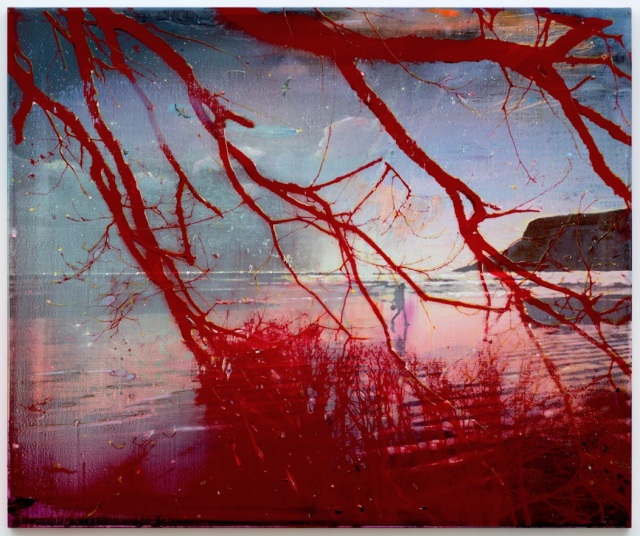 Tom Nys  thinks of her gaze as spying, to see while not seen.  That would apply to the viewer of the painting too.   Cezanne used a criterion of temperature as a measure of success in painting.  Red Bay  heats up  the whole picture plane as if obeying Cezanne. 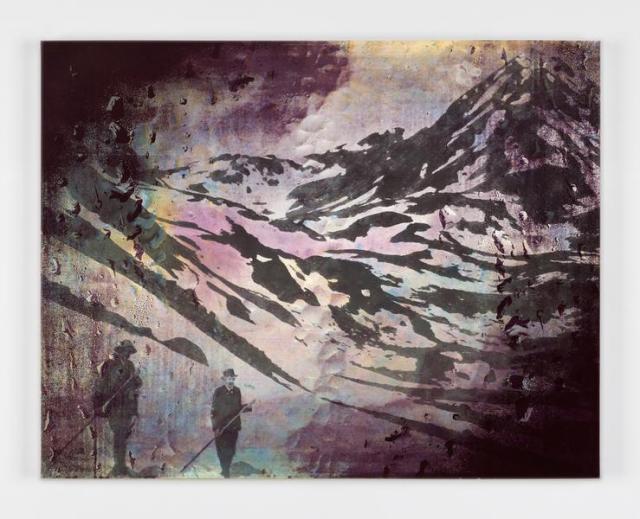 There is a better painting of Errigal among  the exhibits gently flirting with Hokusai, the above example illustrates  Magill’s reflective monolog  miming the intensity of heighten  awareness.  I imagine her telling me: nothing between me and the sky – just my thoughts. Paradox – unsolvable, just what drifts out of the arms and bodies of the trees (Dylan Thomas) . As if she agreed that to really knowing something means  imagining it.  Her paintings are simultaneously witnesses of what she sees and know and of what is only becoming a part of my being ( as a viewer).

Like Monet, Magill follows the image in different light.   There is more: the intensity of secrecy, privacy,  grows from red spectrum to the blue, which also reduces the visibility of the background and harnesses some tremors that shake certainty.  What I see is  what I see now.  Looking again  will be a different seeing. She paints not just with her eyes…

I find an affirmative answer in these paintings to Calvino’s question:

“Will the power of evoking images of things that are not there continue  to develop in  human race increasingly inundated by a flood of prefabricated images?”