Compared to Pat Harris’s  recent paintings of flowers the marks above are not only heavily saturated  but in the process of metamorphosis – a man’s body with arms stretched apart  took orders from Ovidius  Naso, marking the vase and the flowers as if between two blinks of the eye. Resulting uncertainty guides the morphing of one to another.

One aspect appears to me as more significant than the rest.  The painter delays recognition, as if wishing to protect the natural form and  expands the distance  between observation and awakening of the senses.

In an earlier  interview, Harris reminisces about  role of marks, of brushstrokes:

Finally something happened in December… I succeeded in translating the flowers into new marks that were completely absorbed into the surface of the painting. Previously my paintings were arranged around a single motif, if sometimes with echoes to the side. But
now I’ve succeeded in spreading various elements across the surface of the canvas.  (http://patharris.info/wp-content/uploads/2015/04/THE-WEIGHT-OF-SPACE-from-The-Loose-Box-publication-Purdy-HicksLondon-.pdf)

Note the deliberate space- an empty gap – between the stem and thorns. Whose viewing space it is? At first his personal space , and now mine … The current science suggests that personal space expands with anxiety. If stressed, apparently,  our personal space grows.

The image above frees me from tyranny of political correctness and verism, instead offers an assurance that poetic truth is real. It does not assign any material value to this anxious portrait of nature, which seems both purposeful and mysterious.  Mesmerising…

Seeing Harris’s exhibition at Fenderesky evoked my curiosity if anxiety could become  a successful creative force.   I found support  in current research.

The study, published in the journal Personality and Individual Differences, ” suggests that, while many people associate imaginative genius with emotional problems, higher creativity is, in fact, linked to the sort of emotional self-awareness that allows artists and other innovators to ride the ups and downs of the creative process….. This suggests seemingly irrelevant stimuli can benefit the creative process—but only if you have the emotional intelligence to treat them as potentially helpful, and incorporate them into your thinking.

…only if you have the emotional intelligence to adhere – what Emerson called – wise silence?

I catch myself responding to the drama of these lines of sight   before  I  understand  why. I sense that I am as if in some thought space while viewing it.  It is a landscape that refuses to have a name it was given.  An anxious portrait of nature, of  matter and light and water.  Principle particles of life. The least understood part  nearest to the picture plane  and viewer  is almost ready to burst over the frame.

Harris’s paintings  thrive on the creative discrepancy between the brushstrokes  wrestled to the primary position among  attention seeking hues, tonality, motifs, light, observed and invented shapes, placement and sophisticate construct of compositions. His visual intelligence masters  simultaneously  both viewing spaces without conflating them into one:    the composition of the low  horizon attaches his paintings  to the Dutch Landscape tradition of the Golden century, while the preferred  high key  stretches it  towards the French Impressionists.

When he revisits a subject,  Harris feels more confident  to bring it near and impose other hues, while keeping the tonality similar to the earlier  version. I feel that it is now less mysterious, more describing  how the earlier anxiety  was conquered,  replaced by the raw power of saturated brushstrokes….

I find a similarity between these paintings and writing, as writing is understood by David Heyden in his essay:

When a person sits down to write, they have a body, they have memory, they have their entire somatic functioning and everything that is embedded there. Writing is a practice where a singular means is drawn out of all that stuff and shaped into something that can be shared with a few or many people, or with no one but the self who writes. People write out of their skin and their memory and their blood, out of history and culture, out of every hour they have lived, out of everything that they have read, everything that they have not read, everything they have heard and misheard: the reserves of their entire sensory experience. All that is felt and thought and all that resides deep inside them beyond thought. There are an almost infinite number of connections that a writer can make with this, and if they can make those in language, and are not lost costively within themselves, then they are writing.

We call it ‘Nature’; only reluctantly admitting ourselves to be ‘Nature’ too.

Making meaning, finding corrections may feel impossible, yet, it happens.  Harris’s landscapes/seascapes  allow dramatic emptiness surround  an arbitrary focus. The  raw power of viewing perhaps evokes activity in the spectator  – participatory eye does not allow passive distance hence the image is not just a spectacle.

Harris’s painting space, my viewing space are both a personal space.  If a view stresses me, my personal space grows, it expands with anxiety.  Harris defines his distance from the seen  as if he were constantly anxious.  He paints nature and is nature too.   Subjectively, I see that instinctively and at once.  Science offers some insights:

“In the 1990s, neuroscientists made a major breakthrough in understanding personal space with the discovery of a network of neurons in the brain that keeps track of nearby objects. Sometimes called peripersonal neurons, these individual brain cells fire off bursts of activity when objects loom near the body. In my own experiments, I came to call them bubble-wrap neurons. They monitor invisible bubbles of space, especially around the head and torso, and when they rev up, they trigger defensive and withdrawal reflexes.”

Harris makes us complicit witnesses of seeing  nature as it was, is, and is not more.  However, I am told, that if you station yourself in a place called “Carrowteige” and look at the Stacks of Broad Haven — you may see this island… 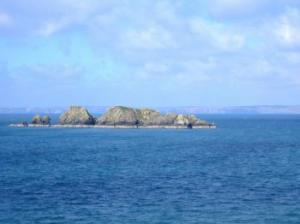 Harris placed the responsibility  on the restricted range of hues  with few harmonies articulated by light and its absence. While  disregarding the loss of details due to the size and perspective, he moved the scale nearer to the viewer  restricting haptic details.  One colour has preferred status of  a guard against revealing too much.  To protect nature against human nature?

That would and should activate anxiety.  And, or, a doubt.

I add  below an  earlier painting, which has not been  installed at Fenderesky , perhaps, as evidence that Harris can do a conventional landscape with a touch of optimism.   But I prefer those other ones.  Their raw sincerity.