Two of the eighteen exhibits  blur the distinction between ” an object” and ” a process”,  that defines the whole exhibition.  Made of plaster and pigment  the horizontal  floor assembly (below)  differs from the  curvilinear “blobs” installed in the alcove  by  the way pigment makes the object. The  appearance of white exact linear drawing  on the blue green ground raises a question  how deep the white strips go . Only in one case the white covers its adjacent edge, thus appearing as going through the whole thickness of the plaster rectangle. The other white “lines” appear as painted  on  top of the blue ground, a false appearance.  They are placed in-between the smooth surfaces of the blue hue. 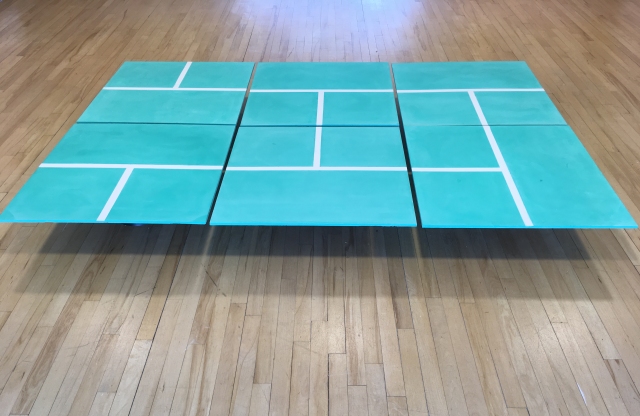 In the above photograph  the white lies on top of some of the blue rectangles as well as inside them.  The “what it looks like” and “how it is made”  are battling which  one will undermine the visual perception more.  However, it is the visual thought that motivates each composition.

Your Ones next Door, 2018, wall installation, plaster, pigment, copper, wood

The objects (I call them “blobs” earlier) in the above image are  playfully  distributed on the wall. They  are made  differently:  one shape one colour.   One hue through and through.  Reminiscent of textile or clay work, plaster is saturated by paint to make no image beyond its own shape and tonality.  The optical illusion  of identity  between what it looks like and how it is made has been pushed to its breaking point. I could not decipher , by looking only,  the materials of the flat (dominant) and linear  (domineering) parts in each assemblage – as to how they were made. It would appear a combination of casting and assembling.

It is reminiscent of  Tony Cragg saying

““Even if it’s nothing linear, things generate something. There is a kind of self-propagating, self-generating energy within the material itself.”

“The idea that if I empty out all the content and just make something that is an empty form, I don’t empty out the content at all. The content is there in a way that is more surprising than if I tried to make a content.”

The above is applicable to other ways of making a painting – not just coloured plaster.    The issues of identity between seeing and being  is pushed ad absurdum.

In cognitive philosophy: Reductio ad absurdum is a mode of argumentation that seeks to establish a contention by deriving an absurdity from its denial, thus arguing that a thesis must be accepted because its rejection would be untenable. It is a style of reasoning that has been employed throughout the history of mathematics and philosophy from classical antiquity onwards. (https://www.iep.utm.edu/reductio/)

The only valid way to establish and accept that assemblages  of coloured plaster are paintings is by looking at concrete examples as they are on the walls.  They appear to be paintings. Abstract, carefully composed,  manicured to perfect surface.  A practical rule of procedure or modus operandi would be reduced to absurdity when it can be shown that its actual adoption and implementation would result in an anomaly. It is not the case. They all look like paintings. 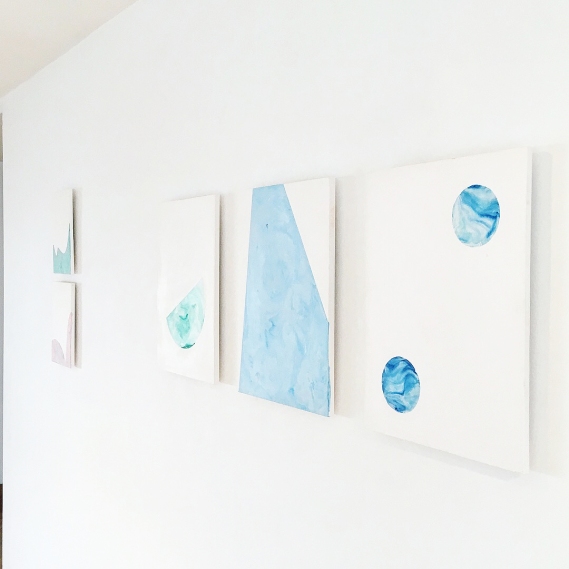 There is more. Looking at the fluent saturation of both blue circles invites association with monotype and watercolour. Similarly in the two  blue stripes as they frame the white low relief between them. 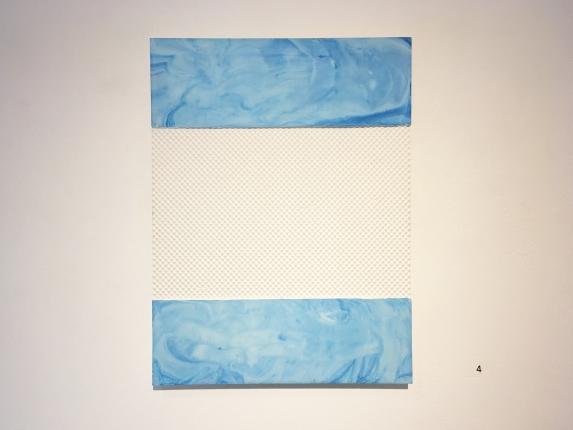 Using plaster, some  white as it comes, and some dyed  with pigment,  is not shockingly new. Gesso has  a proud history of achieving smooth surface velvety to touch, while settling on the ground made of wood or canvas, in several thin layers one after the other. It creates a barrier between the wood substrate, or other ground material, and the painting surface.  Or – in the case of bas-relief it does not.  Sarah Wren Wilson  allows her art to resemble both, painting in the way the surface carries an image, and low relief in the way the pigment and the plaster  deny the difference between ground and surface. 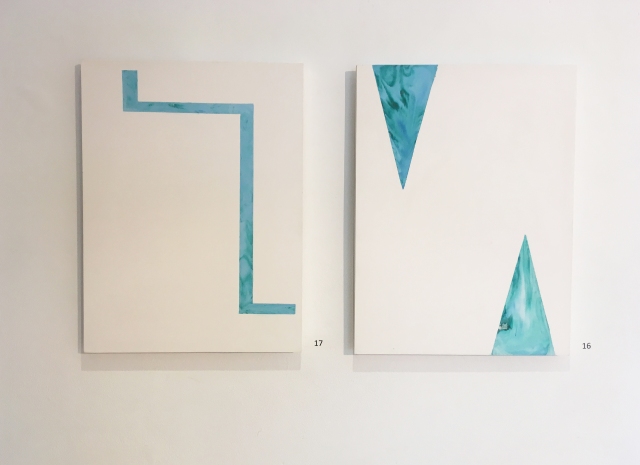 Flowing Vertical Flirtation; Coasting towards the Left; both 2018, plaster and pigment, 30 x 40 cm

(The  small numbers next to the exhibits, 17 and 16,  refer to the handout accompanying the display in the  Sunburst Gallery.  The images were taken by the artist)

Appealing to both to optical and haptic senses, her art  invites comparison with collage, assemblage and intarsia  in addition to resembling painting.   In both blue triangles   above,  and in both blue horizontal rectangles in the I Blue… the pigment appears  visibly being mixed with white plaster liquid and dissipated into fluid marks as it was drying.  As a technique it is similar to staining canvas (e.g. Helen Frankenthaler), or pouring paints on a rotating wheel (Damien Hirst), except it does not define the whole, it is inserted into the whole on the condition of equivalent role.   So far, I found associations to  medieval  and renaissance art ( gesso), and to   late modernism.  However, the sophistication born from removal of the ground   includes a link to early Modernism, its concern with the finish of the surface with removing the final layers.  The rejection of smooth lacquered finish stopping at the stage of ebauche.  Some translate this into English as “lay-in”.  Ebauche was a protest against the academic canon. It placed sensual intensity above the intelectual profundity, paradoxically enhancing it too.  Edward Manet and Paul Cezanne    left scores of wonderful  “unfinished” paintings,  encouraging development of Modernism.   Heroically, western painting  calmed down the divided brushstroke  born from the ebauche, to another hard edge geometrical abstraction and all over field.

The  title above openly connects to ebauche, for which the open strokes of the brush were significant.

These links to older art are there  to smooth up the possible shock of recognition that  ground and surface are one, apparently unmoored form any sort of logic.   Holding to the picture plane and visual narrative is presented as an illusion.   The difference between perceiving these art objects as painting and knowing that they substantially differ from the process of painting, is nearly a difference between fleeting  and long term viewing.  Between the intensity and  profundity.

Wilson does admit in  confusion as a sibling of being defiantly anti-utilitarian.

In relation to the freedom  art depends on, and also offers to viewers,  the question of aesthetic judgement is still within the Kantian condition.  I left the exhibition  refreshed  and little amused what  power (promise?) of  the “shock of the new” still holds.  Conscious of the  manual dexterity Wilson’s choice of mode of work depends on I cherished her colourist instinct for beauty as a poetic cover up.

writer on art
View all posts by Slavka Sverakova →
This entry was posted in essay and tagged contemporary painting, ebauche, plaster and pigment. Bookmark the permalink.