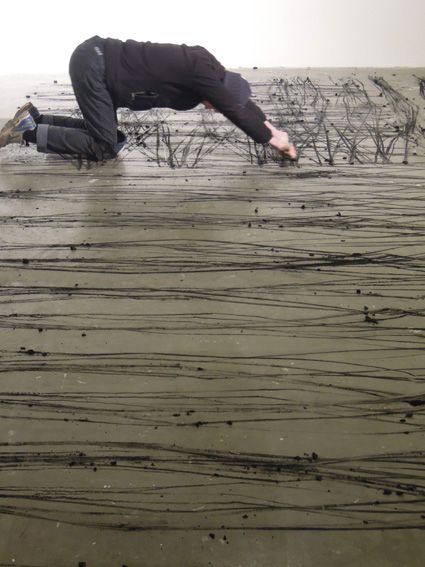 The title refers to the terminology of barristers and judges, zooming on the impossibly nuanced degree “beyond which guilt or innocence may be established”. The exhibition is turned into a medium that translates that impossibility into visibility. Johnston stated: “I deliberately did not isolate the works into individual titles but wanted the show to be read as a whole…” (email to me 1 January 2013).

This is born out by the display symmetry: at the entrance, exit and midpoint of the connecting space, three videos of the artist performing to a camera, frame the other exhibits into an equilateral triangle. A subtle, to some extent subliminal, geometry connects the exhibition to classical order, to rational underpinning, to universal values. Importantly, it puts into relief the otherness of the installations, one in each gallery space, tied to particular narratives, related to regional history.

Moving through the negative space between exhibits forged effortlessly awareness of the correspondences between the whole and its parts,  how and that they metamorphosed into one elegantly displayed, persistently perceivable flow of  gathered fragments from the ordinary outside. Video, news, chairs, wire…

Hypnotical control introduced calm that enveloped both main spaces, starting with surveillance tower images on the small monitor, ending with a  stretched steel cable  travelling the perimeter at the level of my head, the artist’s neckline, set off the wall enough to be noticed, but not enough to reveal its role.

At one point of watching the back to back monitors of  Hold In,2012 , a glimps of the artist’s hand touching a camera behind  her  revealed the method of the simultaneous filming of her torso, front and back. She commented:

both videos should break together for 10 seconds into black, this is important to show that it is a live action not a loop, also just a split second before the black my body moves out of frame and reveals the 2 cameras that were filming which now face each other across a void . Like SETTLE … this acknowledgement of the filming process is important for me, they are video works not live performances although their duration is dictated by the body and what it can sustain. (email to me 10 January 2013)

The mentioned Settle alternates between endurance and swift action. A studio camera reads a man filming the artist slowly lowering her upper body onto a chair from a position horizontal to the ground. As if wounded by touching the seat her body hurls vertically up while she lifts the chair with one hand in the air. As if calm descending after the explosive act, the chair is carefully positioned in a different orientation to the studio camera, and the visual phrase repeats. At times the photographer near the artist is not included in the studio shot, when he is, we do not see what he sees. At other times, the shots of the studio camera are interspersed with his views. Highly skilful, beautifully composed and edited, this is one of the highlights. Similar, but less commanding, is its twin 360 degrees From the Heart, 2012. Johnston sits on the similar type of a chair, submitting her neck, head, and back to extreme physical demands, stretching, holding an uncomfortable position, reaching what feels like dangerous breaking points. Unwelcome and utterly misplaced ennui steals few seconds towards the end.

Demands on limits of Johnston’s physical strength were made during the ten hours of charcoal drawing on the floor of one of the gallery spaces, the one with the steel cable running along its walls. Starting from the crouching position, charcoal in both hands, she let the body slide slowly until it touched the floor completely. The breathing – she mentioned 24 breaths between each phase – worked both as facilitator and user of energy. Measure,2012, has an appearance of reeds panicles  cut from their roots and laid out in armful next to an armful. I find that an important parallel to body as nature. Growing from her body movement it is another pointer to universal existence. Even the broken of ends of the charcoal settle as confident black seeds.

The measure of human body became a module of two identical wooden thresholds of domestic scale Untitled, 2012. Made in untreated timber they fill in the openings at one end of each of the two galleries. Their middle associates with a door, the sides with glass panels, all absent. It would appear that their role in the concept of the exhibition is not only to doubt their functioning, but also understand the possibility of it. From another point of view their domestic association is a foil for both large installations.

Rank and File consists of a large screen projection of appropriated footage of a film that documents the young Queen undertaking her first state duty, riding a horse surrounded by the Household Cavalry. The sound includes the national anthem. At the bottom of the images runs the lyrics  of David Bowie’ song  Jean Genie, which, we read in Cuttings 1, on of two texts distributed to viewers, was the favourite song of one of the ten Hunger Strikers in the Maze prison. From that place come the plastic yellow chairs, which Johnston salvaged from a skip some time ago, and have them mounted in steel frames and bolted to the floor of the gallery. The distance from the projection is comfortable for watching, a sensation undermined by the strip lights on the floor, and by the formation of the chairs. Two of each three face the screen, the third one faces them. Who watches whom? Who interrogates whom? Answers are as variable as the viewers choices. The idea that uncomfortably links the two parts together is the idea of duty. The Queen is said to devote her life to service to the nation. The Hunger strikers  died – dutifully. An idea favoured by armed groups: contemporary Jihad are still making a virtue of dying for an idea, equally sinister.

The Cuttings I and II  are texts printed on cards,  literary elements of the exhibition. I cannot judge their literary merit, but clearly, they work  as useful explanations  and elaborations of both the references to history and personal motivation.

Charlie Haughey, 2012, is a video installation  with sound. The image is projected onto a glass , through which it reaches the wall. However, the two glass panes hold fleece from one sheep. It is a pretty abstraction in grey. Its role is to prevent the normal acuity  of the projected images. Understandably, one reviewer already has misread the action of the filmed farmer as tending fleece, when he is watering small saplings planted on a rocky terrain. Their leaves are optically difficult to separate from the shadowy swirls of the fleece. Impacting on the meaning, that activity connects to the death of the Ch. Haughey, as a signal of growth, renewal, replacement, as well as a connection to the universal order of change. This installation is a virtual triptych conjured up by light. With the projection of an image simultaneously on the glass and on the wall behind it, there are two related yet different images: the fleece acts as a sieve for the rays  constructing  a moving image off the man watering the saplings. At the same time the glass surface allows reflection of the same, strongly merging by the swirling abstraction of the fleece in the frame. The third image comes up when the light of the projector switches off. Numerous shades of grey softly define the abstract field inside the frame, evoking the mute poetry of a charcoal drawing of gris – en – gris painting.

In some way the three images work like thesis, antithesis and synthesis. Beyond the refreshing celebration of sight, the triptych offers layers of meaning of ordinary life, as if in contrast to the male and  female voices delivering the news about the death of a public figure. For foreign, non – Anglo-phonic audience, and for audiences not familiar with Irish history, the sound is not essential to grasp that equivalence between the living working man and dead celebrity is not obtained. Johnston pointed out to me that the radio broadcast happened by chance in the background, when she filmed the watering of the saplings. Consequently the connection between the two protagonists is facilitated only by one hearing the news about the other. No indication of certainty that this  actually happened. By denying the visual force to a public figure/ celebrity, this work of art delicately aligns with traditions that include Chardin and the so called small masters of 17 -18th C Dutch painting. The texts and sounds are site(region) specific, the images  connect to any place and people without much effort.