Posted on February 25, 2015 by Slavka Sverakova

A year has passed between the first an the last of Hutchings’s images.  Although they protect their individual identity they are peacefully similar, in that they trap light into a kind of trinity: light is the subject, medium and image.  Moreover, while Earth bound, they trap rays coming we do not know from where.  It is little like astronomy  without its scientific interpretation,  like philosophy proposing continuity between the thought and being.

The images are certain in that they exist, and uncertain in that they do not tell what they are images of. Could be it some  air  settling its imprint  in that split of the second when the lens is absent?  Trapping the cosmic rays, however, endows the outcome  with a pleasant, even playful, mystery. 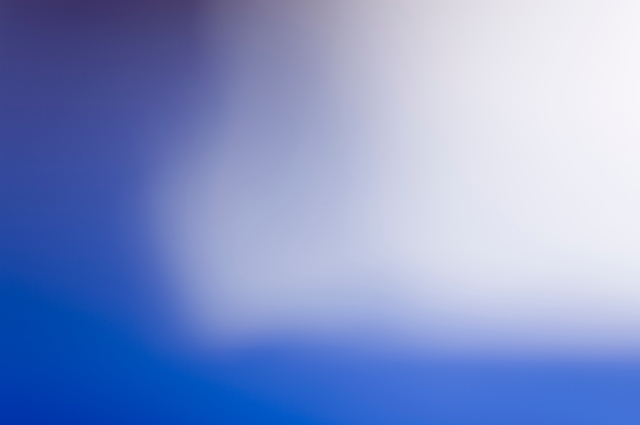 “There is no lens on the camera. I press the shutter button, usually  I do this in quick succession. Sometimes I move the camera around, tipping it or moving. There is often a bright source of light and I point the camera at it. Sometimes I look through the viewfinder, sometimes I don’t. It matters little. This is just process.”

Hutchings’  art carries a distaste for self-importance or for victory dependent on authority, preferring instead uncertainty forged by stripping the camera of its newest technology  to mimic pin hole camera, escaping from the present to the photography’s past. Bending time… There is no lens, no object, just subtleties of light – and a disabled camera grabbing stills by chance and whim- so well!

The dark shape on the left is a part inside the camera….as if saying “I was there” to let the light/air to descend onto … what exactly? I guess his is the digital camera…

Light has been favoured as a value by painters, photographers and film makers as a conditio sine qua non of visibility, of seeing. Plato, in the Myth of the Cave gave light a task to make truth visible. The simplicity of Hutchings’s method prevents such heroic goal, nevertheless, it demonstrates similar take on life.   What is seen is a visible truth about a tiny fragment of the universe in that tiny speck of time  synchronised by chance meeting of a constellation of necessary and sufficient conditions to make each image.

“So long as men can breathe or eyes can see,

So long lives this, and this gives life to thee.”

I am not sure –  I shall substitute  creative force for “this”,  and narrow it down to  visual force, visual imagination.  After all, Dante Alighieri greeted imagination as being  moved by a light that is formed in heaven – while images rain down from the heavens… connecting over centuries with Elliasson’s installation 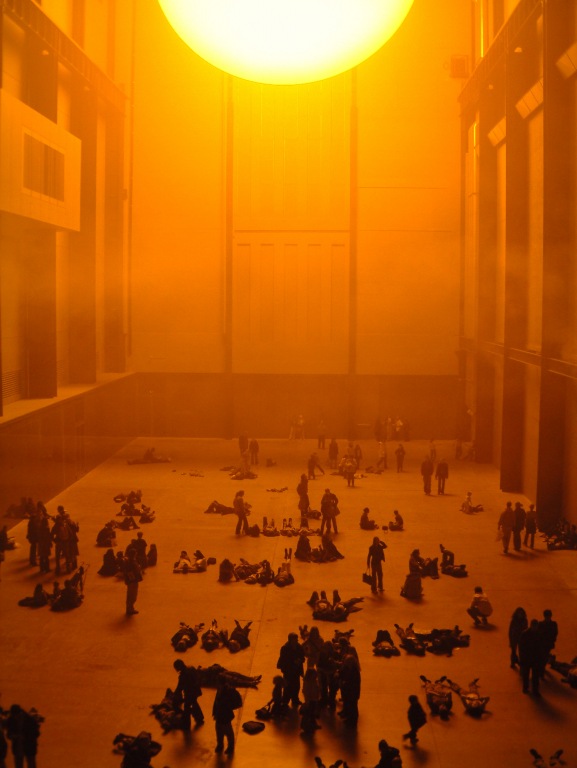 The advantage of Dante’s poetic continuity between images and light is shareable  among different ways of thinking that intersect and meet  even if they aim at distinct goals.

Hutchings does not name the images, only numbers them. It is a tenuous identification, once the number departs from the jpeg – it cannot be  re-attached with any certainty. As if it wished to escape archiving…

The  very different  image  below is lens based and anthropocentric.  It includes  breathing and seeing man and a boy  as they  observe sky.   Such a denial of exactitude  constitutes not a conflict, the viewer  readily assumes  an approximation. When it comes to the sunset -different rule seems to apply:  the evening sky is  observable everywhere and often. The known variations make this particular one both believable and unique, in the sense that it may never repeat the same layers and hues during the viewer’s life time. The  attraction  of a sunset lies in its being both temporary and eternal, both here and far away.

Looking out to the sky represents  people’s desire to break out of earth bound existence, as well as search for answers about our place in the universe.  The arrogance of anthropocentric culture has been shaken for centuries, yet we still need to be warned.

Throughout the known history people thought about eternity, after life, second life, incarnation  – often as a reward or punishment related to their “material”life on Earth.  Among those who explored our place in the universe brilliantly is  the already cited  Bertrand Russell (May 18, 1872–February 2, 1970  in What I Believe Published in 1925.

“The antithesis of mind and matter is … more or less illusory; but there is another antithesis which is more important — that, namely, between things that can be affected by our desires and things that cannot be so affected. The line between the two is neither sharp nor immutable”.

Visions of timeless realms offer dichotomy between body and soul.

Bertrand Russel  removes that by a simple observation:”Whoever considers conception, gestation, and infancy cannot seriously believe that the soul in any indivisible something, perfect and complete throughout this process. It is evident that it grows like the body, and that it derives both from the spermatozoon and from the ovum, so that it cannot be indivisible.”

Hutchings obeys that rationale – identifying thought with a split second decision as continuous.  He avoids  a kind of wager  imagined by J W Goethe between Faust and Mephistopheles. yet, his move by hand and taking off the lens is there to make something captive, a convincing parallel to Faust’s  saying:

“If to the fleeting hour I say”Remain, so fair thou art, remain!” 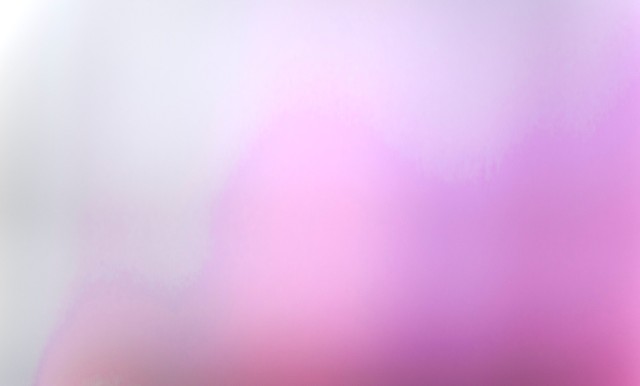 It looks like abstract painting , staining  or watercolour,  with a weight of hue removed, rather like in a rainbow.  The prism is not water, it is air, the light is daylight or artificial light in a gallery, not a direct sunshine – yet… maybe he will allow direct sunshine  at times.

The white sphere blinds the eye to move to the restful blue.  This image has similar gradation of light  as Grunewald’s Christ ascending heavens in the haze of strong yellow  light above the Earth horizon.

The split of the second light that separates the earth from the universe is the “nothingness” Frederick aims at.

Fredericks’s  photography  is a  continuous addition to the concept of art as of perfect match between nature and the man made as illustrated by the anecdote about  Zeuxis and Parrhasios.  At the same time, it does the opposite. It confesses that it is a man made image  of  an object experienced by the photographer.

What is the next move?  Increased intensity of experience?

The breathing seeing persons  reclining on the floor  of the Turbine Hall  do not look at work of art,  immersing in it. Its temporal being has limits: in space it is surrounded by  walls and the viewing time is more or less open choice (within the opening hours). Immersive light based works of art are dependent on our experiencing them as nature.

Turrell is cited as saying

“my work has no object, no image, no focus – (it)  is important to me to create an experience of wordless thought.”

The immersive environment  is forged by the light projected in space  transforming the measurable into seemingly endless.  It feels radical, until the medieval architecture’s take on this is remembered.  The walls  of medieval cathedrals were de-materialised by stained glass windows  to prevent a direct seeing of the outside daily light from inside the cathedral. The worshippers were suspended from the outside in a meditative twilight  willing them to contemplate the other life.  Turrell does no invite thoughts of other life as a sign of our immortality, he offers a meditative environment as real experience though.

If Hutchings installed the  following image in a large scale like Turrell I guess it will evoke its  aesthetic contemplative power too.

Turrell  participated in the  Light and space Movement  members of which included  John McCraken, Doug Wheeler, Eric Orr and  Robert Irwin, whose minimalism is a step away from Hutchings’s lens-less photography.

Hutchings abandonned the concept of original and print as in photography, of title, material, size as in painting. The images are made by switching on the shuttle when the lens is out,  while aiming at – nothing in particular and everything that by chance gets imprinted into the frame.  A mode of work very different from the photography he pursues when documenting performance art in Northern  Ireland.

He now enhances a group of artists investigating light’s power as a partner of chance.

Martina Corry draws with light in a dark room – luminograms. 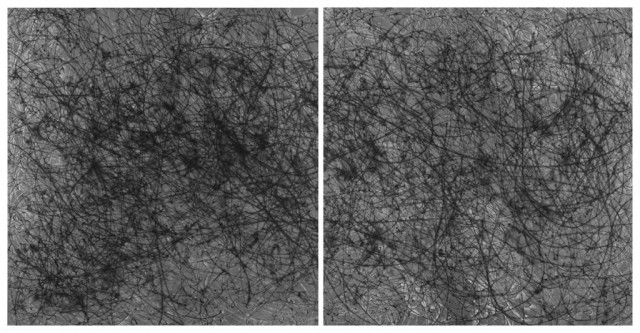 Martina Corry, Luminogram. The Pursuit of Nothing and Everything, 2004, Image 4/5 see http://www.martinacorry.com

Deirdre McKenna seduces artificial light to draw  shadows while surmounting the obstacles of objects she put in its way.

All three embrace uncertainty of chance as aesthetic function. They  follow a pathway to absorb the intelligence of poetry along the search of Paul Valery  “for what  I call the Total Phenomenon, that us the totality of consciousness, relations, conditions, possibilities and impossibilities” (Cahiers,XII,722)

It is a good place to be.