Posted on November 16, 2017 by Slavka Sverakova

It was a part of the group exhibition  Process Extended, at Goose lane Gallery, opened on November 2nd 2017.   Artists exhibiting in the backroom of the Tivoli Barbers were  Hannah Clegg, Hannah Johnston and Megan Kerr and Charlie Scott.

I start with  Susan Sontag who phrased  in relation to writing what I think of in relation to  visual art.  She also inserted her awareness that  all  “is probably true of the practice of any art.”

Writing is a mysterious activity. One has to be at different stages of conception and execution, in a state of extreme alertness and consciousness and in a state of great naivete and ignorance, Although this is probably true of the practice of any art, it may be more true of writing because the writer—unlike the painter or composer—works in a medium that one employs all the time, throughout one’s waking life. Kafka said: “Conversation takes the importance, the seriousness, the truth out of everything I think.” I would guess that most writers are suspicious of conversation, of what goes out in the ordinary uses of language. People deal with this in different ways. Some hardly talk at all. Others play games of concealment and avowal, as I am, no doubt, playing with you. There is only so much revealing one can do. For every self-revelation, there has to be a self-concealment. A life-long commitment to writing involves a balancing of these incompatible needs. But I do think that the model of writing as self-expression is much too crude. If I thought that what I’m doing when I write is expressing myself, I’d junk my typewriter. It wouldn’t be liveable-with. Writing is a much more complicated activity than that.

–from an interview with Geoffrey Movius http://bostonreview.net/archives/BR01.1/sontag.html 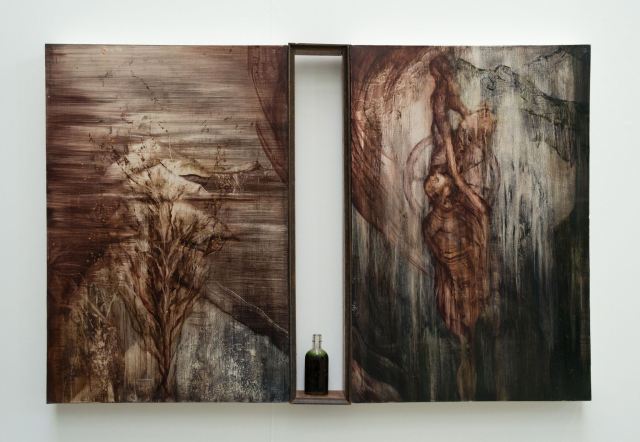 Scott impressed me earlier  with the courage to “belong” to a long tradition of West European landscape paintings, namely its strong precedent in the Danube School of the late 15th C , and  to make it of his time and space.  There are no deep dark forests in Northern Ireland -nor in the Ireland as  whole, the bogs are ubiquitous.    He foregrounds  not the panorama of the land ,what he cannot soberly observe with sincere insistence that it is so, instead he paints an imagined  believable  single tree 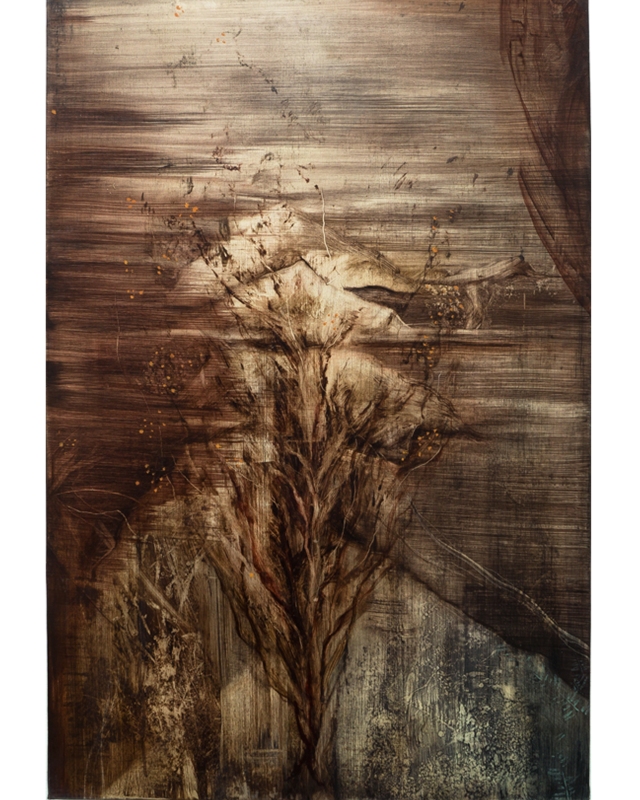 and human figures  as if preserved in the peat. 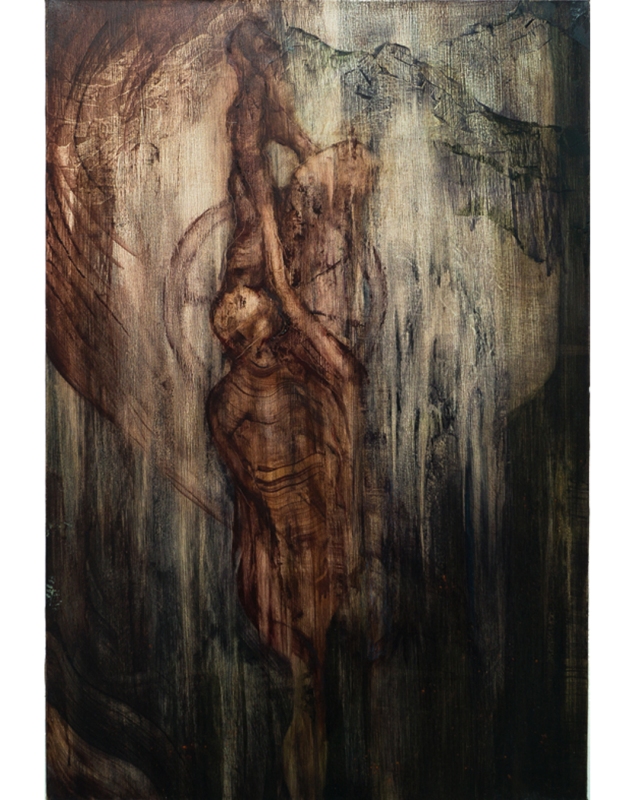 The diptych with the dark liquid in the bottle (so it is really a triptych – two wings painted, one found object)  immediately connects the the international concern about exploitation of natural resources, pollution of the environment, and the absence of precautionary principle.

It is an important moral and cognitive issue.  An MP recently wrote to me

The precautionary principle for example has been a particular issue in slowing up development in the United Kingdom because even where an action has not been proven to be detrimental to the environment, very often developments have been turned down on the basis that they might cause problems, sometimes these problems are not even specified. That is certainly one part of the EU regulations or legislation which I would like to see changed in the longer run.

The emaciated figures in  the diptych have just enough of the circular halo to echo Gruenewald’s  wing on the Isenheim altarpiece and the rootless tree in its solitude has just  enough connectivity with late 15th C  engravings and  paintings of Adam’s tree  before the fall  to provide an echo of the beginning of life on Earth.   Scott infuses that connectivity with  shift to  the now and here  by denying the presence of a reference to an old script as  a dominant.  While he cannot completely erase the association.   The diptych/triptych  appears  like a tired repeat of Nietzsche’s  take on recurrence  ready not to be endured  rather to be  dismissed by the power of freedom from convictions, from unquestioned view of things.  The palette is not just demure, it is the end of light, which only scrapes through the tiny gaps in the muddy earth tonality of  liquid matter covering the view of the world.   Richard Wagner’s Twilight of the Gods  shares the subject of psychological motivation for abandoning gold (money)  as a  central value.  Scott places the dark liquid between the tree  and the figures –  is it a cause or a solution?

As long as convictions are placed above questioning and freedom of  thought, the moral message of this diptych remains  its meaning.  Its other meanings appear concealed, revealing themselves only in the tacit viewing.

writer on art
View all posts by Slavka Sverakova →
This entry was posted in essay and tagged bog, bottle with liquid, Diptych, figures, oil painting, tree. Bookmark the permalink.